NASA Rocket Experiment: Universe is Brighter Than We Thought 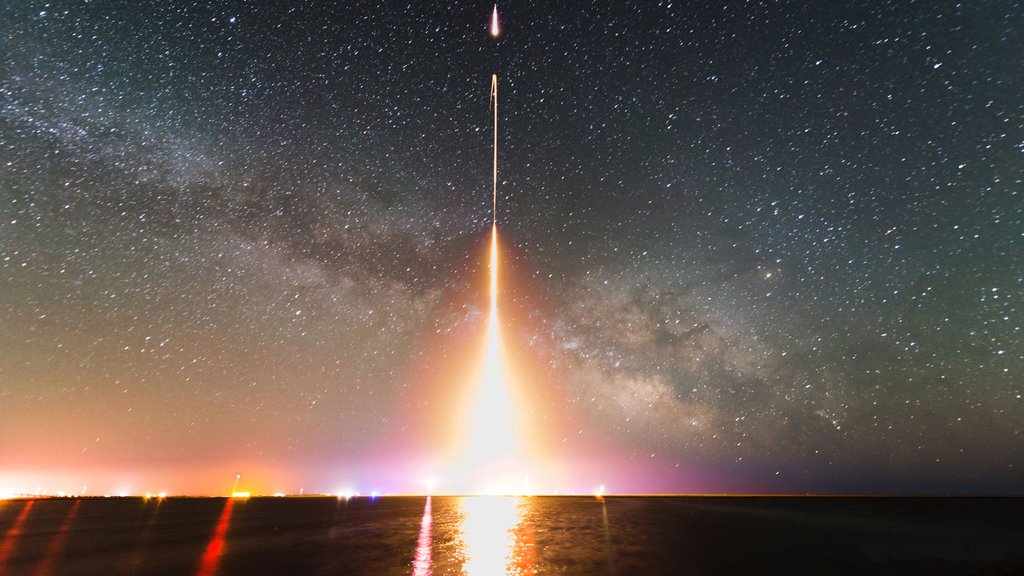 A time-lapse photograph of the CIBER rocket launch, taken from NASA's Wallops Flight Facility in Virginia in 2013. This was the last of four launches of the Cosmic Infrared Background Experiment (CIBER).› Full image and caption
Credit: T. Arai/University of Tokyo 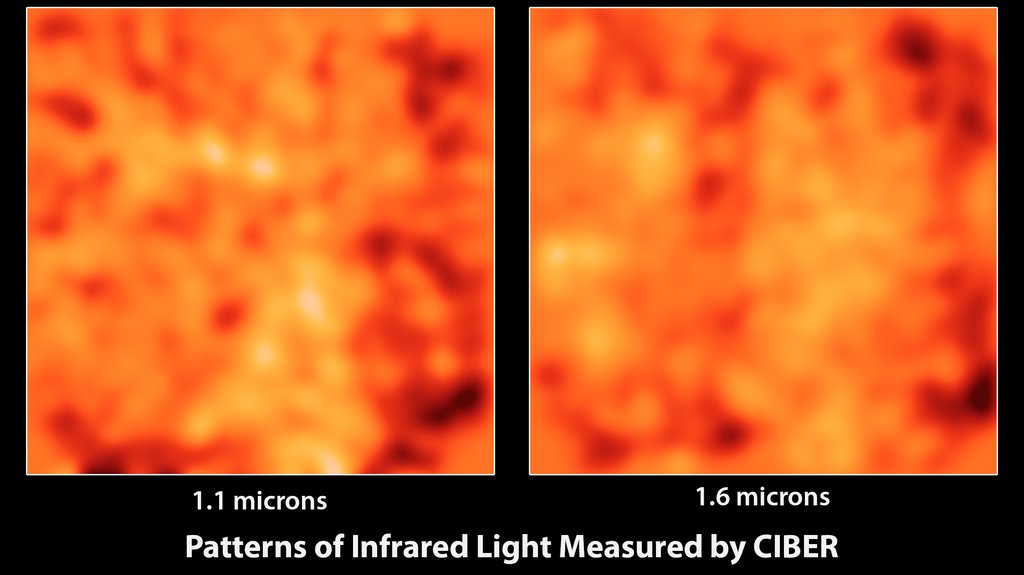 These images from the Cosmic Infrared Background Experiment, or CIBER, show large patches of the sky at two different infrared wavelengths (1.1 microns and 1.6 microns) after all known galaxies have been subtracted out and the images smoothed to enhance the large structures.› Full image and caption
Credit: NASA/JPL-Caltech 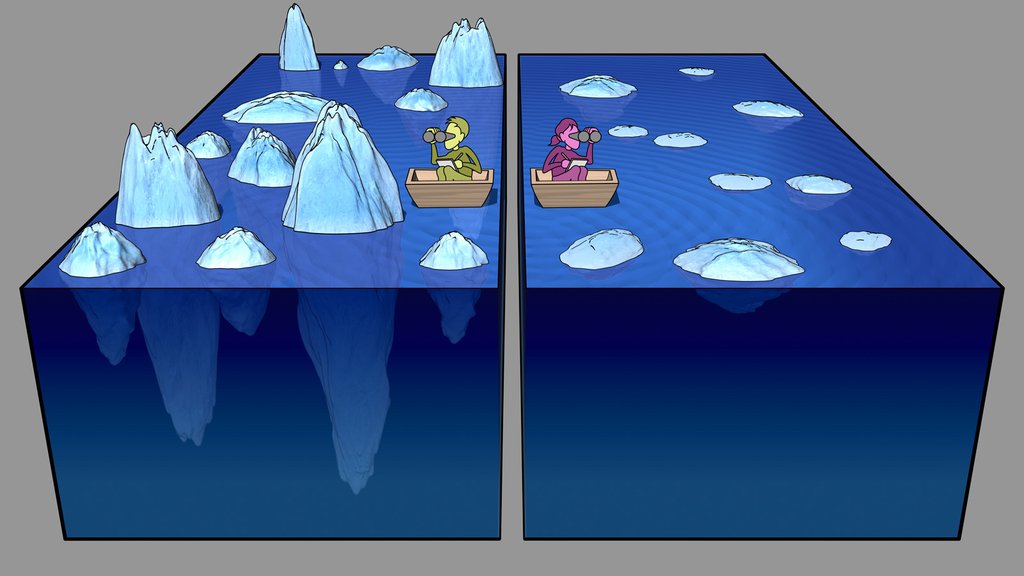 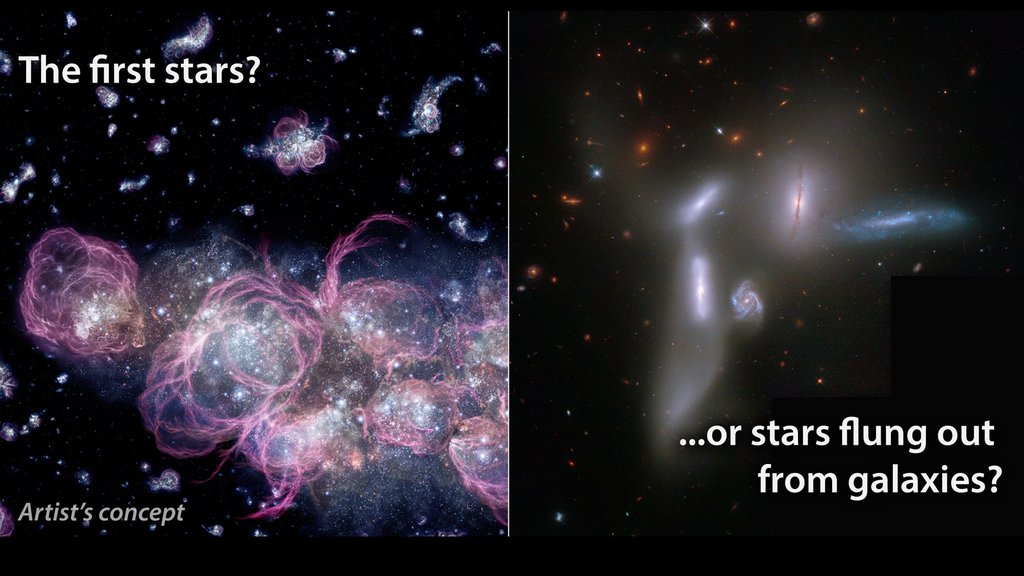 Our sky is filled with a diffuse background glow, known as the cosmic infrared background. Much of the light is from galaxies we know about, but previous Spitzer measurements have shown an extra component of unknown origin.› Full image and caption
Credit: Left: Adolf Schaller for STScI Right: Hubble Legacy Archive, NASA, ESA; Processing: Judy Schmidt 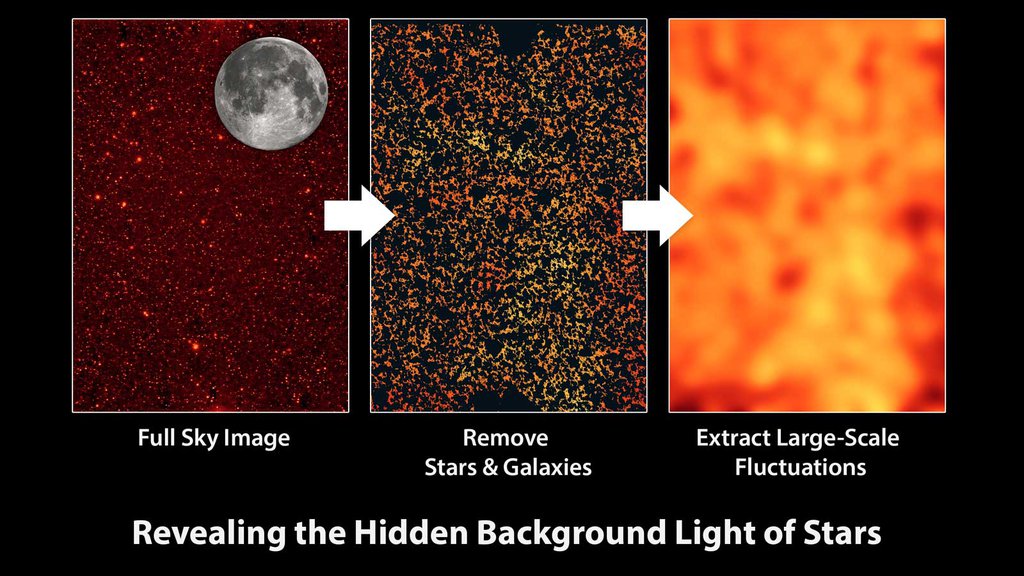 This graphic illustrates how the Cosmic Infrared Background Experiment, or CIBER, team measures a diffuse glow of infrared light filling the spaces between galaxies.› Full image and caption
Credit: NASA/JPL-Caltech 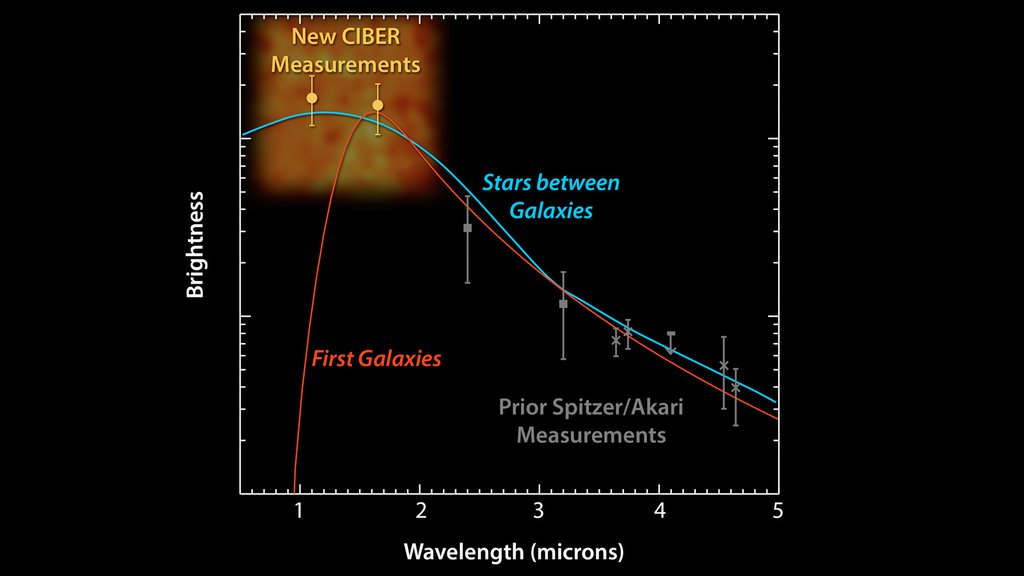 This plot shows data from the Cosmic Infrared Background Experiment, or CIBER, rockets launched in 2010 and 2012.› Full image and caption
Credit: NASA/JPL-Caltech

A NASA sounding rocket experiment has detected a surprising surplus of infrared light in the dark space between galaxies, a diffuse cosmic glow as bright as all known galaxies combined.

A NASA sounding rocket experiment has detected a surprising surplus of infrared light in the dark space between galaxies, a diffuse cosmic glow as bright as all known galaxies combined. The glow is thought to be from orphaned stars flung out of galaxies.

The findings redefine what scientists think of as galaxies. Galaxies may not have a set boundary of stars, but instead stretch out to great distances, forming a vast, interconnected sea of stars.

Observations from the Cosmic Infrared Background Experiment, or CIBER, are helping to settle a debate on the origins of this background infrared light in the universe, previously detected by NASA's Spitzer Space Telescope: Whether it comes from these streams of stripped stars too distant to be seen individually, or from the first galaxies to form in the universe.

"We think stars are being scattered out into space during galaxy collisions," said Michael Zemcov, lead author of a new paper describing the results from the rocket project and an astronomer at the California Institute of Technology (Caltech) and NASA's Jet Propulsion Laboratory in Pasadena, California. "While we have previously observed cases where stars are flung from galaxies in a tidal stream, our new measurement implies this process is widespread."

Using suborbital sounding rockets, which are smaller than those that carry satellites to space and are ideal for short experiments, CIBER captured wide-field pictures of the cosmic infrared background at two infrared wavelengths shorter than those seen by Spitzer. Because our atmosphere itself glows brightly at these particular wavelengths of light, the measurements can only be done from space.

"It is wonderfully exciting for such a small NASA rocket to make such a huge discovery," said Mike Garcia, program scientist from NASA Headquarters. "Sounding rockets are an important element in our balanced toolbox of missions from small to large."

During the CIBER flights, the cameras launch into space, then snap pictures for about seven minutes before transmitting the data back to Earth. Scientists masked out bright stars and galaxies from the pictures and carefully ruled out any light coming from more local sources, such as our own Milky Way galaxy. What's left is a map showing fluctuations in the remaining infrared background light, with splotches that are much bigger than individual galaxies. The brightness of these fluctuations allows scientists to measure the total amount of background light.

To the surprise of the CIBER team, the maps revealed a dramatic excess of light beyond what comes from the galaxies. The data showed that this infrared background light has a blue spectrum, which means it increases in brightness at shorter wavelengths. This is evidence the light comes from a previously undetected population of stars between galaxies. Light from the first galaxies would give a spectrum of colors that is redder than what was seen.

"The light looks too bright and too blue to be coming from the first generation of galaxies," said James Bock, principal investigator of the CIBER project from Caltech and JPL. "The simplest explanation, which best explains the measurements, is that many stars have been ripped from their galactic birthplace, and that the stripped stars emit on average about as much light as the galaxies themselves."

Future experiments can test whether stray stars are indeed the source of the infrared cosmic glow. If the stars were tossed out from their parent galaxies, they should still be located in the same vicinity. The CIBER team is working on better measurements using more infrared colors to learn how stripping of stars happened over cosmic history.

Results from two of four CIBER flights, both of which launched from White Sands Missile Range in New Mexico in 2010 and 2012, appear Friday, Nov. 7 in the journal Science.

For more information about CIBER, visit: