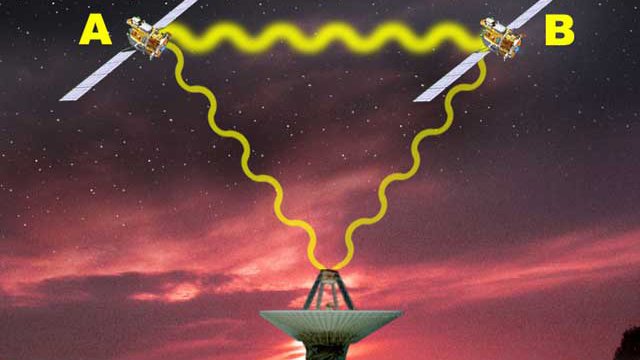 Albert Einstein might be astonished to learn that NASA physicists have applied his relativity theory to a concept he introduced but later disliked namely that two particles that interact could maintain a connection even if separated by a vast distance.

Albert Einstein might be astonished to learn that NASA physicists have applied his relativity theory to a concept he introduced but later disliked namely that two particles that interact could maintain a connection even if separated by a vast distance. Researchers often refer to this connection as "entanglement."

Researchers at NASA's Jet Propulsion Laboratory, Pasadena, Calif., have discovered that this entanglement is relative, depending on how fast an observer moves with respect to the particles, and that entanglement can be created or destroyed just by relative motion. This might change the way entanglement is used on future spacecraft that move with respect to Earth or with each other.

Einstein thought this connection violated the relativity rule that information can't travel faster than the speed of light. Adami and Dr. Robert Gingrich, also of JPL, are the first to apply Einstein's relativity theory to quantum entanglement between particles. They compared the amount of entanglement when the particles were at rest to when they were given a boost. Their findings show that while speeding up ordinary entangled pairs would lead to a loss of the precious entanglement, certain special pairs can be created whose entanglement is increased instead. This increases the connection between them.

Understanding how some of the characteristics of a particle can become entangled through relative motion alone when they seemed to be unentangled or unconnected when at rest could have many applications. For example, entangled particles could be used to synchronize atomic clocks, which are essential for navigating spacecraft in deep space.

"One of the amazing things about entanglement is that it connects objects over arbitrary distances, so that in principle the two clocks could be started and stopped simply by acting on only one of them," said Adami. "However, no workable protocol has been found to date to achieve that."

Because the creation of entanglement in the laboratory is usually a delicate matter, discovering new ways to create entanglement is always a goal of the quantum technology community.

"If you can create entanglement just by moving with respect to what you're measuring, then seemingly you've created something from nothing," said Gingrich.

Another possible application of entanglement is quantum teleportation: the ability to transfer the precise quantum state of one microscopic object to another, while using only traditional communications, such as a phone line. This technique, which has been demonstrated experimentally, requires that the sender and receiver share pairs of entangled particles. But until now nobody knew what would happen to these pairs if the sender and receiver move with respect to each other, or if an observer moves with respect to them. This new theory gives researchers a whole new outlook on what happens to particle pairs when you apply the relativity theory.

The research also has ramifications for ongoing work in the area of quantum computation, which seeks to use the subtle effects of quantum mechanics to build faster and more efficient computers.

"Whenever new ground is treaded by theory, new applications are sure to follow in its wake," said Adami.

Gingrich and Adami's findings appeared in a paper they co-authored titled, "Quantum Entanglement of Moving Bodies," which appeared in the December 2002 issue of the journal Physical Review Letters.

The Quantum Computing Technologies Group at JPL investigates the design and capabilities of hypothetical computing and measurement devices that use delicate quantum effects for enhanced power and accuracy for future space missions.

NASA's Office of Earth Science, Washington, D.C. provided funding for this work. The California Institute of Technology in Pasadena manages JPL for NASA.