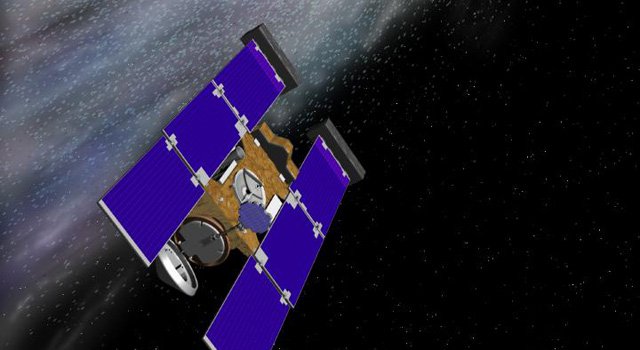 This is an artist's concept of the Stardust spacecraft beginning its flight through gas and dust around comet Wild 2. The white area represents the comet. The collection grid is the tennis-racket-shaped object extending out from the back of the spacecraft.
Credit: NASA/JPL 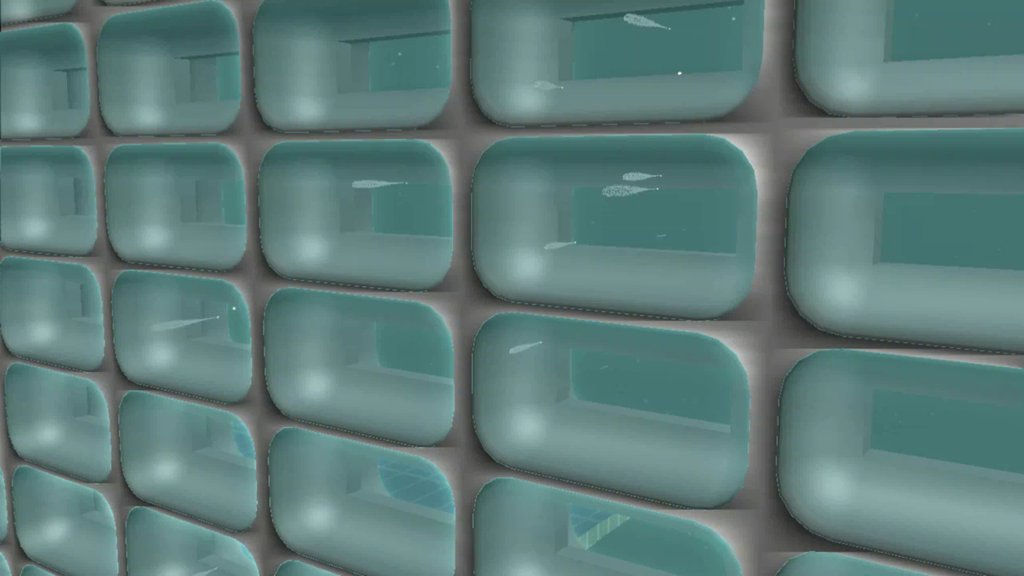 This is an artist's concept of particle hits on the aerogel collection grid. The greenish areas represent the aerogel. Hits are the light green teardrop-shaped areas. Particles are represented by dots at the tips of the teardrops.
Credit: NASA/JPL

"Glycine is an amino acid used by living organisms to make proteins, and this is the first time an amino acid has been found in a comet," said Jamie Elsila of NASA's Goddard Space Flight Center in Greenbelt, Md. "Our discovery supports the theory that some of life's ingredients formed in space and were delivered to Earth long ago by meteorite and comet impacts."

Elsila is the lead author of a paper on this research accepted for publication in the journal Meteoritics and Planetary Science. The research was presented during the meeting of the American Chemical Society at the Marriott Metro Center in Washington, D.C., August 16.

"The discovery of glycine in a comet supports the idea that the fundamental building blocks of life are prevalent in space, and strengthens the argument that life in the universe may be common rather than rare," said Carl Pilcher, director of the NASA Astrobiology Institute, which co-funded the research.

Proteins are the workhorse molecules of life, used in everything from structures like hair to enzymes, the catalysts that speed up or regulate chemical reactions. Just as the 26 letters of the alphabet are arranged in limitless combinations to make words, life uses 20 different amino acids in a huge variety of arrangements to build millions of different proteins.

Stardust passed through dense gas and dust surrounding the icy nucleus of Wild 2 (pronounced "Vilt-2") on Jan. 2, 2004. As the spacecraft flew through this material, a special collection grid filled with aerogel – a novel sponge-like material that's more than 99 percent empty space – gently captured samples of the comet's gas and dust. The grid was stowed in a capsule that detached from the spacecraft and parachuted to Earth on Jan. 15, 2006. Since then, scientists around the world have been busy analyzing the samples to learn the secrets of comet formation and our solar system's history.

"We actually analyzed aluminum foil from the sides of tiny chambers that hold the aerogel in the collection grid," said Elsila. "As gas molecules passed through the aerogel, some stuck to the foil. We spent two years testing and developing our equipment to make it accurate and sensitive enough to analyze such incredibly tiny samples."

Earlier, preliminary analysis in the Goddard labs detected glycine in both the foil and a sample of the aerogel. However, since glycine is used by terrestrial life, at first the team was unable to rule out contamination from sources on Earth. "It was possible that the glycine we found originated from handling or manufacture of the Stardust spacecraft itself," said Elsila. The new research used isotopic analysis of the foil to rule out that possibility.

Isotopes are versions of an element with different weights or masses; for example, the most common carbon atom, Carbon 12, has six protons and six neutrons in its center (nucleus). However, the Carbon 13 isotope is heavier because it has an extra neutron in its nucleus. A glycine molecule from space will tend to have more of the heavier Carbon 13 atoms in it than glycine that's from Earth. That is what the team found. "We discovered that the Stardust-returned glycine has an extraterrestrial carbon isotope signature, indicating that it originated on the comet," said Elsila.

The team includes Daniel Glavin and Jason Dworkin of NASA Goddard. "Based on the foil and aerogel results it is highly probable that the entire comet-exposed side of the Stardust sample collection grid is coated with glycine that formed in space," adds Glavin.

"The discovery of amino acids in the returned comet sample is very exciting and profound," said Stardust Principal Investigator Donald E. Brownlee, a professor at the University of Washington, Seattle. "It is also a remarkable triumph that highlights the advancing capabilities of laboratory studies of primitive extraterrestrial materials."