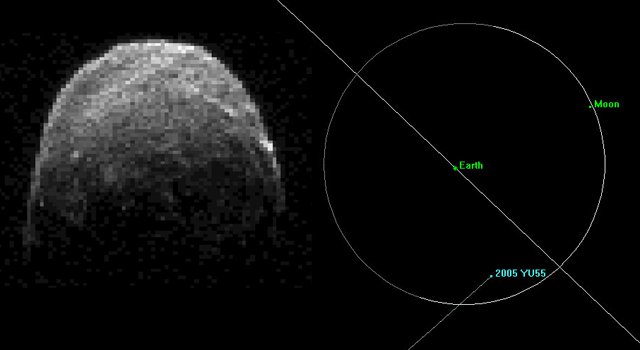 Each of the 28 frames required 20 minutes of data collection by the Goldstone radar. At the time of the observations, 2005 YU55 was approximately 860,000 miles (1.4 million kilometers) from Earth. The resolution is about 13 feet (4 meters) per pixel. 2005 YU55 takes approximately 18 hours to complete one rotation, so the rotation in the movie appears much more rapid than the actual asteroid rotation speed.

The Goldstone observations utilized a new system to obtain images with a resolution of 4 meters, which is five times finer than the highest resolution previously possible at Goldstone.

"The encounter with 2005 YU55 has produced an enormous amount of data that is still being processed." said radar astronomer Lance Benner, the principal investigator for the 2005 YU55 Goldstone observations, from NASA's Jet Propulsion Laboratory in Pasadena, Calif. "The sequence of images we obtained shows unprecedented fine-scale detail on this asteroid, which is comparable in size to the Empire State Building.  The Goldstone images show evidence for concavities, a ridge near the asteroid's equator, and numerous features that may be large boulders."

The trajectory of asteroid 2005 YU55 is well understood. Although the asteroid is in an orbit that regularly brings it to the vicinity of Earth, (and Venus and Mars), 2005 YU55's 2011 encounter with Earth was the closest for at least the last 200 years.