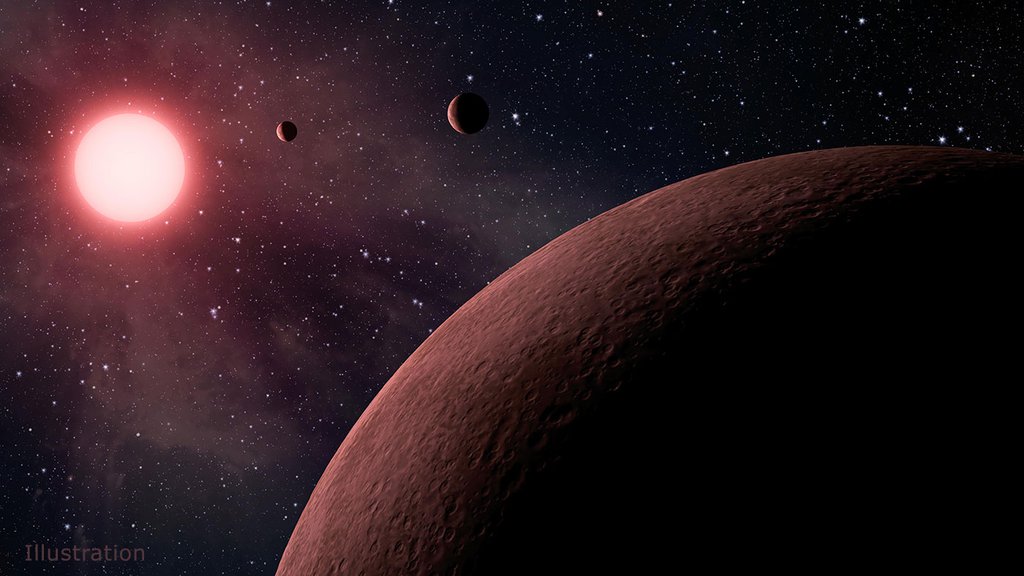 NASA's Kepler space telescope team has identified 219 new planet candidates, 10 of which are near-Earth size and in the habitable zone of their star.› Full image and caption
Credit: NASA/JPL-Caltech 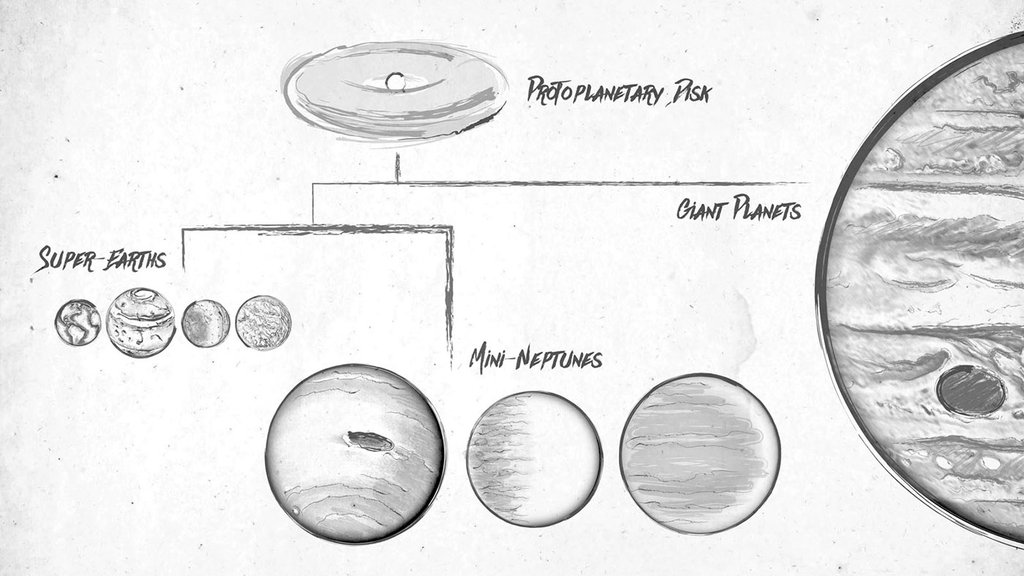 This sketch illustrates a family tree of exoplanets. Planets are born out of swirling disks of gas and dust called protoplanetary disks. The disks give rise to giant planets like Jupiter as well as smaller planets mostly between the size of Earth and Neptune. Researchers using data from the W. M. Keck Observatory and NASA's Kepler mission discovered that these smaller planets can be cleanly divided into two size groups: the rocky Earth-like planets and super-Earths, and the gaseous mini-Neptunes.
Credit: NASA/Kepler/Caltech (T. Pyle) 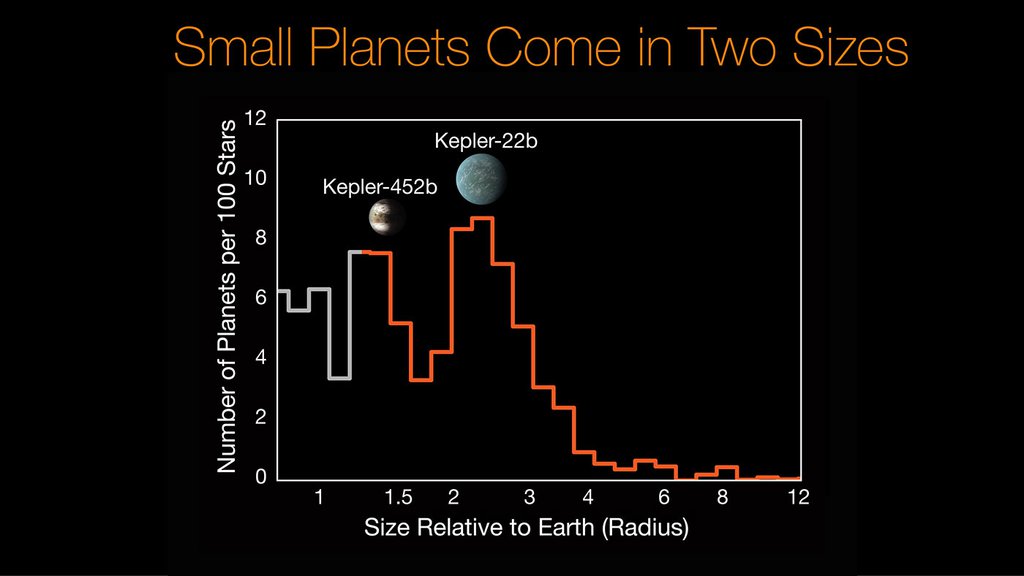 Researchers using data from the W. M. Keck Observatory and NASA's Kepler mission have discovered a gap in the distribution of planet sizes, indicating that most planets discovered by Kepler so far fall into two distinct size classes: the rocky Earths and super-Earths (similar to Kepler-452b), and the mini-Neptunes (similar to Kepler-22b). This histogram shows the number of planets per 100 stars as a function of planet size relative to Earth. 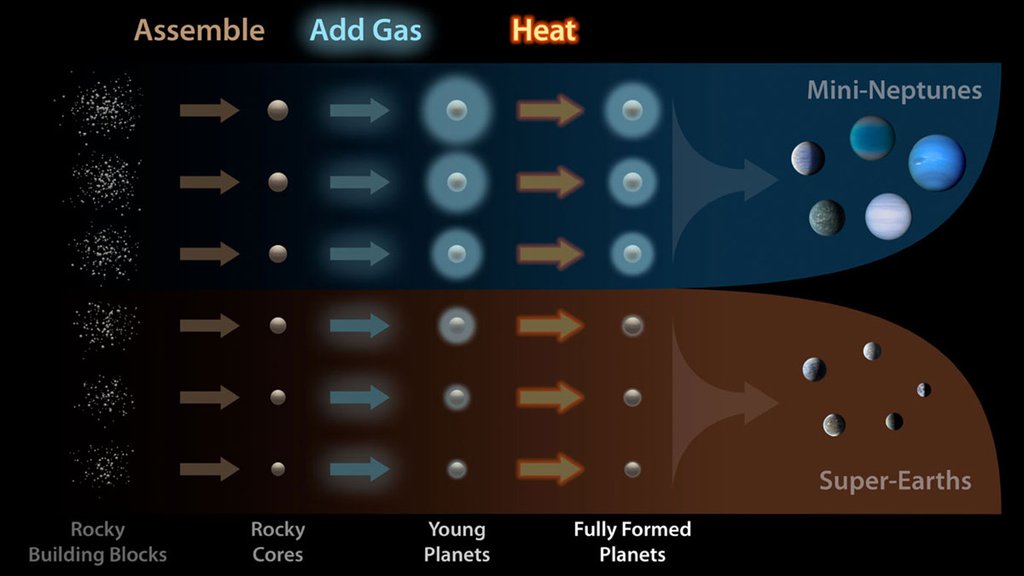 This diagram illustrates how planets are assembled and sorted into two distinct size classes. First, the rocky cores of planets are formed from smaller pieces. Then, the gravity of the planets attracts hydrogen and helium gas. Finally, the planets are "baked" by the starlight and lose some gas. At a certain mass threshold, planets retain the gas and become gaseous mini-Neptunes; below this threshold, the planets lose all their gas, becoming rocky super-Earths.
Credit: NASA/Kepler/Caltech (R. Hurt)

NASA's Kepler space telescope team has released a mission catalog of planet candidates that introduces 219 new candidates, 10 of which are near-Earth size and orbiting in their star's habitable zone, which is the range of distance from a star where liquid water could pool on the surface of a rocky planet.

This is the most comprehensive and detailed catalog release of candidate exoplanets, which are planets outside our solar system, from Kepler's first four years of data. It's also the final catalog from the spacecraft's view of the patch of sky in the Cygnus constellation.

Additionally, results using Kepler data suggest two distinct size groupings of small planets. Both results have significant implications for the search for life. The final Kepler catalog will serve as the foundation for more study to determine the prevalence and demographics of planets in the galaxy, while the discovery of the two distinct planetary populations shows that about half the planets we know of in the galaxy either have no surface, or lie beneath a deep, crushing atmosphere -- an environment unlikely to host life.

The findings were presented at a news conference Monday at NASA's Ames Research Center in California's Silicon Valley.

"The Kepler data set is unique, as it is the only one containing a population of these near Earth-analogs - planets with roughly the same size and orbit as Earth," said Mario Perez, Kepler program scientist in the Astrophysics Division of NASA's Science Mission Directorate. "Understanding their frequency in the galaxy will help inform the design of future NASA missions to directly image another Earth."

The Kepler space telescope hunts for planets by detecting the minuscule drop in a star's brightness that occurs when a planet crosses in front of it, called a transit.

This is the eighth release of the Kepler candidate catalog, gathered by reprocessing the entire set of data from Kepler's observations during the first four years of its primary mission. This data will enable scientists to determine what planetary populations -- from rocky bodies the size of Earth, to gas giants the size of Jupiter -- make up the galaxy's planetary demographics.

To ensure a lot of planets weren't missed, the team introduced their own simulated planet transit signals into the data set and determined how many were correctly identified as planets. Then, they added data that appear to come from a planet, but were actually false signals, and checked how often the analysis mistook these for planet candidates. This work told them which types of planets were overcounted and which were undercounted by the Kepler team's data processing methods.

"This carefully-measured catalog is the foundation for directly answering one of astronomy's most compelling questions - how many planets like our Earth are in the galaxy?" said Susan Thompson, Kepler research scientist for the SETI Institute in Mountain View, California, and lead author of the catalog study.

One research group took advantage of the Kepler data to make precise measurements of thousands of planets, revealing two distinct groups of small planets. The team found a clean division in the sizes of rocky, Earth-size planets and gaseous planets smaller than Neptune. Few planets were found between those groupings.

Using the W. M. Keck Observatory in Hawaii, the group measured the sizes of 1,300 stars in the Kepler field of view to determine the radii of 2,000 Kepler planets with exquisite precision.

"We like to think of this study as classifying planets in the same way that biologists identify new species of animals," said Benjamin Fulton, doctoral candidate at the University of Hawaii in Manoa, and lead author of the second study. "Finding two distinct groups of exoplanets is like discovering mammals and lizards make up distinct branches of a family tree."

It seems that nature commonly makes rocky planets up to about 75 percent bigger than Earth. For reasons scientists don't yet understand, about half of those planets take on a small amount of hydrogen and helium that dramatically swells their size, allowing them to "jump the gap" and join the population closer to Neptune's size.

The Kepler spacecraft continues to make observations in new patches of sky in its extended mission, searching for planets and studying a variety of interesting astronomical objects, from distant star clusters to objects such as the TRAPPIST-1 system of seven Earth-size planets, closer to home.