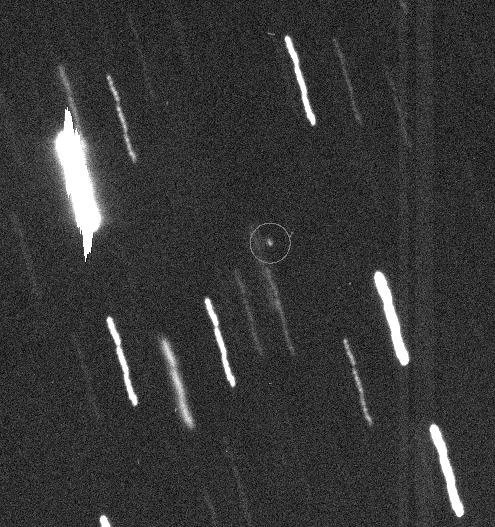 Using updated information, NASA scientists have recalculated the path of a large asteroid.

PASADENA, Calif. -- Using updated information, NASA scientists have recalculated the path of a large asteroid. The refined path indicates a significantly reduced likelihood of a hazardous encounter with Earth in 2036.

The Apophis asteroid is approximately the size of two-and-a-half football fields. The new data were documented by near-Earth object scientists Steve Chesley and Paul Chodas at NASA's Jet Propulsion Laboratory in Pasadena, Calif. They will present their updated findings at a meeting of the American Astronomical Society's Division for Planetary Sciences in Puerto Rico on Oct. 8.

"Apophis has been one of those celestial bodies that has captured the public's interest since it was discovered in 2004," said Chesley. "Updated computational techniques and newly available data indicate the probability of an Earth encounter on April 13, 2036, for Apophis has dropped from one-in-45,000 to about four-in-a million."

Tholen made improved measurements of the asteroid's position in the images, enabling him to provide Chesley and Chodas with new data sets more precise than previous measures for Apophis. Measurements from the Steward Observatory's 2.3 meter (90-inch) Bok telescope on Kitt Peak in Arizona and the Arecibo Observatory on the island of Puerto Rico also were used in Chesley's calculations.

The information provided a more accurate glimpse of Apophis' orbit well into the latter part of this century. Among the findings is another close encounter by the asteroid with Earth in 2068 with chance of impact currently at approximately three-in-a-million. As with earlier orbital estimates where Earth impacts in 2029 and 2036 could not initially be ruled out due to the need for additional data, it is expected that the 2068 encounter will diminish in probability as more information about Apophis is acquired.

Initially, Apophis was thought to have a 2.7 percent chance of impacting Earth in 2029. Additional observations of the asteroid ruled out any possibility of an impact in 2029. However, the asteroid is expected to make a record-setting -- but harmless -- close approach to Earth on Friday, April 13, 2029, when it comes no closer than 29,450 kilometers (18,300 miles) above Earth's surface.

"The refined orbital determination further reinforces that Apophis is an asteroid we can look to as an opportunity for exciting science and not something that should be feared," said Don Yeomans, manager of the Near-Earth Object Program Office at JPL. "The public can follow along as we continue to study Apophis and other near-Earth objects by visiting us on our AsteroidWatch Web site and by following us on the @AsteroidWatch Twitter feed."

The science of predicting asteroid orbits is based on a physical model of the solar system which includes the gravitational influence of the sun, moon, other planets and the three largest asteroids.

For more information about NASA, visit: