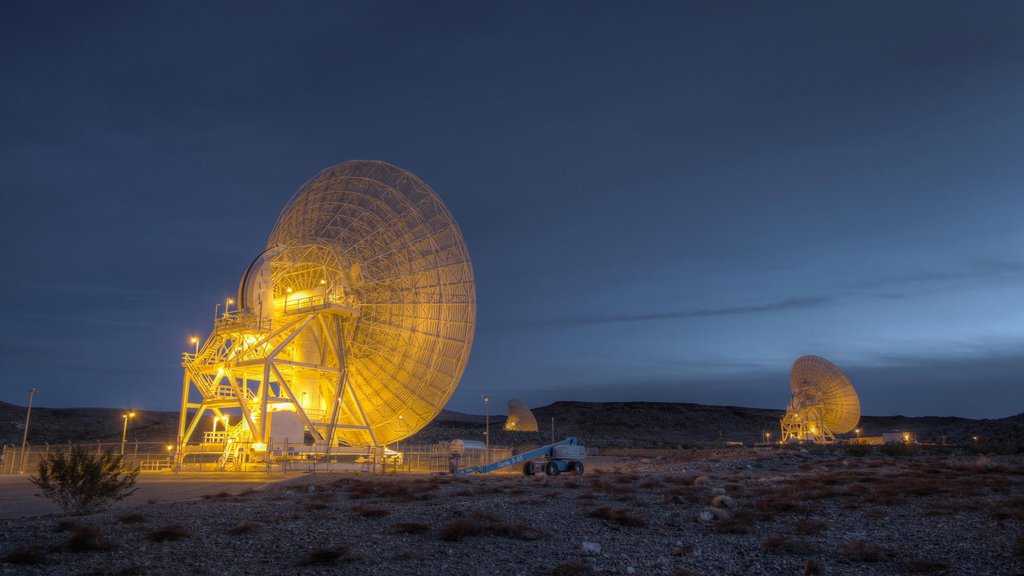 January 2l, l985 marked the first time that signals from the Soviet Venera-Halley (VEGA) space probes were received at NASA tracking station. As part of an international tracking network organized by the French space agency CNES, the giant 64-meter antenna of NASA's Deep Space Network (DSN) located at Goldstone, California, successfully homed in on the faint signals from the two spacecraft launched from the Soviet Union in December and currently on their way to Venus.

The VEGA-l and VEGA-2 probes were launched on December l5 and 2l, l984, respectively. Both spacecraft comprise Soviet mission to study Venus and Halley's Comet, and each will drop an instrument-laden balloon into the Venusian atmosphere in June l985. The balloons will be tracked by two networks: the international one in addition to Soviet network.

Each VEGA spacecraft will also drop lander to the Venus surface that will study the atmospheric properties on descent. The gravitational field of Venus will then bend the VEGA trajectories so as to put the spacecraft on precise course for their March l986 encounters with the comet.

Once deposited in the planet's equatorial region, the two balloons will be free to float in the middle, most active layer of Venus' three-tiered cloud system. Scientists hope that data obtained from the balloons will help further the understanding of the complex Venus weather machine.

The U.S. is cooperating with France in this balloon experiment which will investigate the characteristics and motions of the Venusian atmosphere.

To track the balloons' movements, and thus measure wind velocity, transmitters on the balloons will continually send signals to Earth during the two-day lifetime of each balloon. The signals will be received by three globally placed hyper- sensitive 64-meter diameter dish antennas of NASA's DSN, which are part of an international network of radio astronomy antennas organized by the Centre National d'Etudes Spatiales (CNFS), the French space agency. Using the signals from the combined array of at least ten antennas worldwide in addition to data from the Soviet network, scientists can calculate in detail the balloons' locations and motions, using radio astronomy technique known as Very Long Baseline Interferometry (VLBI). This technique can measure balloon velocity, and hence Venus wind velocity, with precision of approximately two miles per hour at distance of l08 million km (67 million miles) from Earth.

The DSN antennas will make unique contribution to the international tracking network in that they will also receive data from the other scientific instruments on the balloon gondola. These include instruments to measure the frequency of lightning flashes, the vertical velocity of wind gusts, the temperature and pressure of the atmosphere, and the location and density of clouds. One of the most important scientific objectives will be to determine how these measurements vary with time and place.

Certain aspects of the atmospheric circulations of Venus are not well understood, and scientists will be studying fluctuations in order to learn more about the circulation. Understanding turbulence and wave type motions in the clouds is important because Venus cloud layers are believed to be the driving gear of the planet's multi-layered weather machine. For example, scientists hope that data from the balloon mission will help explain why the atmosphere at Venus' cloud tops circles the planet at the amazing rate of once every four days, or at speed of 400 km (250 miles) per hour, as compared to near-calm at the surface of Venus.

Other atmospheric phenomena that are not fully understood include:

-- how the clouds evolve chemically; and

-- what chemical cycles are in force, i.e., how is the sulfur source for the clouds' sulfuric acid cycled up from the surface?

The balloon mission data may provide an insight to the solutions of these, and other, atmospheric puzzles of Venus.

In order to gather atmospheric data during the Venus encounter, each balloon will carry its scientific instruments housed in narrow segmented gondola about l.5 meters (five feet) in length. The balloons themselves will be helium- filled and will measure 3 meters (l0 feet) in diameter with the gondola suspended l2 meters (40 feet) below.

The U.S. science team has been working with French scientists of the Service d'Aeronomie of the Centre National de la Recherche Sciencetifique (CNRS) the Aeronomy Service of the French National Center for Scientific Research directed by Professor Jacques Blamont, who also was the initiator of this joint balloon project. The data from the balloons will be analyzed jointly. U.S. team member Boris Ragent of NASA's Ames Research Center, Mountain View, California, provided the design of one of the balloon instrument packages the nephelometer which measures cloud properties. The U.S. team will play an important role in the analysis of the precision tracking data to determine the wind velocities and turbulence in the Venus atmosphere. Robert Preston and other scientists of NASA's Jet Propulsion Laboratory (JPL) in Pasadena, California, were heavily involved in the conceptual design of the wind experiment. The first discovery of the super-rotation of the Venus atmospheric winds was made by French amateur astronomers Boyer and Camichel in l96l, and was later confirmed by the U.S. Pioneer Venus spacecraft.

The U.S. team of scientists is led by Robert Preston of JPL, and includes number of scientists with past experience in studying Venus in the U.S. Pioneer-Venus mission. Among those who will paricipate in the analysis of the Venus atmospheric data are Boris Ragent, Alvin Seiff and Richard Young of NASA's Ames Research Center; Jordan Ellis, Lee Elson, Claude Hildebrand, and George Purcell of JPL; and Andrew Ingersoll of the California Institute of Technology in Pasadena, California.

In order to track the Soviet spacecraft, the antennas of the DSN had to be converted to receiving frequency. Leading the complex DSN effort are Charles Stelzried, James Withington of JPL. They work with Gerard Laurans of CNES's Toulouse Space Center, who is coordinating the international network.

Although much is not understood about Venus' atmosphere, scientists do know some of the significant characteristics of the environment in which the balloons will float from Pioneer Venus probe data and from earlier USSR lander-probes. The middle cloud layer extends from 50.5 to 56.5 km (30.3 to 33.9 miles) above the surface of Venus, and the temperature in this layer varies from 72 to l3 (l62 to 55F). The pressure at the altitude in which the balloons will float is half an atmosphere about thousand times the pressure of Earth's atmosphere at the same altitude. As with all of Venus' cloud layers, the middle cloud layer is made up mostly of droplets of concentrated sulfuric acid.

The balloons' batteries will run out of power after 60 hours. However, after about two days the balloons will cross from the night side of Venus into the day side, and it is likely that they will not survive the Sun's heat. They will probably become too hot, causing their internal pressure to rise, and the balloons to pop.

By studying the atmospheric dynamics on Venus and other planets in the solar system, scientists strive to gain comprehensive understanding of atmospheric processes in general, so that all the planets, including Earth, can be understood in terms of general set of physical laws.