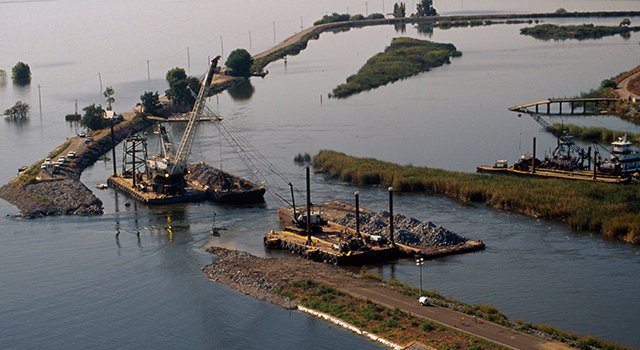 This 2004 levee break, caused by a burrowing beaver, did $90 million worth of damage. NASA's UAVSAR is monitoring levees for early signs of stress that could lead to failure.
Credit: Calif. DWR 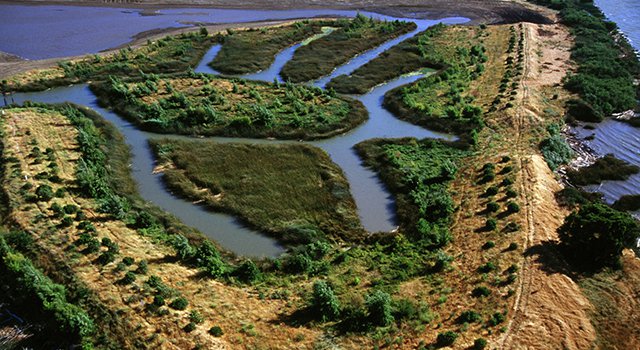 Levees and islands in the Sacramento River delta. There are an estimated 1,100 miles of levees.
Credit: U.S. Bureau of Reclamation

One morning in 2008, research scientist Cathleen Jones of NASA's Jet Propulsion Laboratory in Pasadena, Calif., was flying over the San Andreas fault near San Francisco, testing a new radar instrument built at JPL. As the plane banked to make a turn, she looked down to see the Sacramento River delta, a patchwork of low-lying lands crisscrossed by levees.

Jones was using an instrument that can measure tiny movements of the ground on the scale of less than half an inch (less than a centimeter). It's called the Uninhabited Aerial Vehicle Synthetic Aperture Radar (UAVSAR).

"It struck me that this new instrument might be perfect for monitoring movement of levees," said Jones. Checking the scientific literature, she found that nothing like that had been attempted before in the delta. She reported her idea to water managers at the California Department of Water Resources (DWR). She didn't know it, but she was at the beginning of a long-lived initiative to refine NASA technology for use in safeguarding the delta levees.

In the Sacramento River delta north of San Francisco Bay, islands, agricultural lands and communities below sea level are protected from surrounding water channels by more than 1,100 miles (1,800 kilometers) of dirt levees, many of which date back to the California Gold Rush. About two-thirds of all Californians and more than 4 million acres of irrigated farmland rely on the delta for water.

If a levee gives way, the results can be disastrous. A single 2004 levee failure created $90 million of damage and threatened the water supply to Southern California. However, the first warning that a levee is developing a structural problem can be a tiny soil deformation -- too small to be noticed by a visual inspection.

Remote sensing is a clear solution. The DWR managers had tried other remote sensing methods such as lidar, without complete satisfaction. They were immediately interested in the possibilities of UAVSAR. Joel Dudas, a senior water resources engineer with the DWR, said, "This technology has great possibility [as] an economic solution at a very precise scale."

Supported by NASA's Applied Sciences Program, JPL and the DWR established a partnership in 2009 to begin a research project testing how UAVSAR technology could be applied for monitoring the delta levees. Since then, Jones and UAVSAR have flown a mission over the delta on NASA's C-20A scientific research aircraft every four to eight weeks. Each mission flies along nine overlapping flight lines that were designed to observe every levee in the 700-square-mile (1,800-square kilometer) delta from at least three directions in about three hours.

Like all radars, UAVSAR shoots pulses of microwaves at the ground and records the signals that bounce back. By comparing the data from consecutive flights, Jones can measure the rate of upward or downward soil movement in the intervening time. The instrument is specifically designed to ignore larger-scale movements (such as airplane motion) and record tiny variations that other instruments cannot identify. The team has also developed a model to support the data processing. The model incorporates land use, soil type and other factors that affect subsidence rates, allowing researchers to put the data in a context that can help water resource managers find better ways to manage the delta.

From the first year of operation, the research flights have proved that UAVSAR can locate areas of concern. That year, it detected a damaged levee that had been rammed by a ship. More recently, it spotted an area behind a levee where land was subsiding a few inches a year -- fast, but not observable by eye. The DWR added soil and continues to monitor the area.

Dudas would like to study how this technology would perform if the delta went through a period of prolonged high water. "During high water we drive the levees, watching for leaks, but if there's a lot of vegetation or it's dark, we may not be able to see them. If we could fly this instrument during a flood, it would allow us to direct our emergency vehicles where they need to go.

If this work saves even one levee failure, that's more than worth all the time and energy we've put into it."