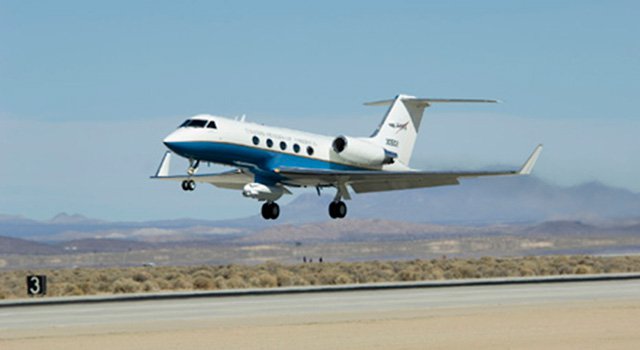 NASA's C-20A Earth science research aircraft with the UAVSAR slung underneath its belly lifts off the runway at Edwards Air Force Base on a prior radar survey mission.
Credit: NASA Armstrong 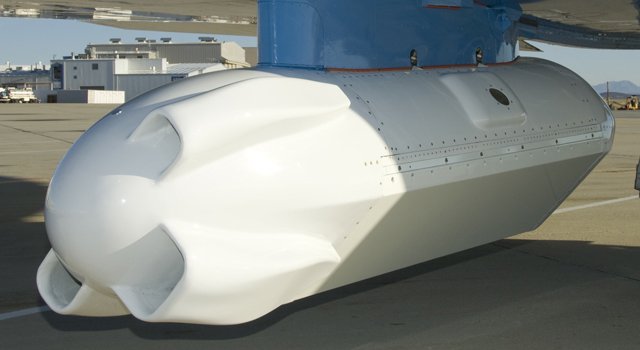 The magnitude 6.0 quake, centered near Napa, was the strongest to occur in the San Francisco Bay Area in a quarter-century. It caused extensive damage and numerous injuries in Napa and nearby areas, although no deaths were reported.

Data from the flight will be compared with data acquired by the UAVSAR on previous missions over the same area to determine if significant displacements have occurred along fault lines. The radar can measure tiny movements of the ground of less than half an inch, or less than a centimeter, from an altitude of almost 8 miles (13 kilometers) above ground.

According to Randal Albertson, deputy director of NASA's Airborne Science Program at NASA Armstrong, the mission will enable JPL scientists to acquire new data "to build on the data sets we already have to help us better understand the mosaic of Northern California faults, possible impacts of the drought and lower ground water, as well as the impact the earthquake had on the critical levee system" in the California delta east of the San Francisco Bay Area.

"What we are doing has real potential science benefit to Californians and the nation," he added.

JPL UAVSAR project manager Yunling Lou said obtaining new data shortly after the recent quake rather than waiting until later would have several benefits, among them:

• Early acquisition would enable scientists to distinguish between co-seismic and post-seismic deformation events. This means improved information on fault mechanics, better predictions of where aftershocks might occur and a better estimate of earthquake hazard.

• Results would be shared with agencies such as the California Earthquake Clearinghouse to support damage assessment efforts. The deformation is very subtle, so UAVSAR data can offer a critical contribution in terms of quantifying fault offsets.

• Two data lines will cover the North Bay Aqueduct. The California Department of Water Resources is still assessing the damage there and needs to know how much movement occurred in soft soil areas near the delta.

The UAVSAR radar survey missions are flown at an altitude of about 41,000 feet (12,500 meters). The comparison of data recorded during previous flights with new data is aided greatly by a Precision Platform Autopilot developed by NASA Armstrong engineers that enables the C-20A to fly its data collection flight tracks within about 30 feet of those previously flown.

NASA's Airborne Science Program is part of the Earth Science Division of NASA's Science Mission Directorate, which provides support for the UAVSAR project. For more information about NASA's Earth science activities in 2014, visit:

For more about NASA's C-20A and the UAVSAR, visit: