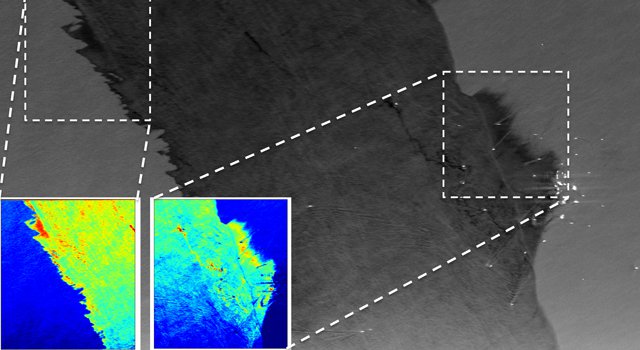 NASA UAVSAR image of the Deepwater Horizon oil spill, collected June 23, 2010. The oil appears much darker than the surrounding seawater in the greyscale image. This is because the oil smoothes the sea surface and reduces its electrical conductivity, causing less radar energy to bounce back to the UAVSAR antenna. Additional processing of the data by the UAVSAR team produced the two inset color images, which reveal the variability of the oil spill's characteristics, from thicker, concentrated emulsions (shown in reds and yellows) to minimal oil contamination (shown in greens and blues). Dark blues correspond to areas of clear seawater bordering the oil slick. Images
Credit: NASA/JPL-Caltech

Researchers at JPL and Caltech have developed a method to use a specialized NASA 3-D imaging radar to characterize the oil in oil spills like the 2010 BP Deepwater Horizon spill.

PASADENA, Calif. - Researchers at NASA's Jet Propulsion Laboratory and the California Institute of Technology in Pasadena have developed a method to use a specialized NASA 3-D imaging radar to characterize the oil in oil spills, such as the 2010 BP Deepwater Horizon spill in the Gulf of Mexico. The research can be used to improve response operations during future marine oil spills.

Caltech graduate student Brent Minchew and JPL researchers Cathleen Jones and Ben Holt analyzed NASA radar imagery collected over the main slick of the BP Deepwater Horizon oil spill on June 22 and June 23, 2010. The data were acquired by the JPL-developed Uninhabited Aerial Vehicle Synthetic Aperture Radar (UAVSAR) during the first of its three deployments over the spill area between June 2010 and July 2012. The UAVSAR was carried in a pod mounted beneath a NASA C-20A piloted aircraft, a version of the Gulfstream III business jet, based at NASA's Dryden Aircraft Operations Facility in Palmdale, Calif. The researchers demonstrated, for the first time, that a radar system like UAVSAR can be used to characterize the oil within a slick, distinguishing very thin films like oil sheen from more damaging thick oil emulsions.

"Our research demonstrates the tremendous potential of UAVSAR to automate the classification of oil in a slick and mitigate the effects of future oil spill tragedies," said Jones. "Such information can help spill incidence response commanders direct cleanup operations, such as the mechanical recovery of oil, to the areas of thick oil that would have the most damaging environmental impacts."

Current visual oil classification techniques are qualitative, and depend upon the skill of the people doing the assessment and the availability of skilled observers during an emergency. Remote sensing allows larger areas to be covered in a consistent manner in a shorter amount of time. Radar can be used at night or in other low-light or poor weather conditions when visual surveys can't be conducted.

Radar had previously been used to detect the extent of oil slicks, but not to characterize the oil within them. It had generally been assumed that radar had little to no use for this purpose. The team demonstrated that UAVSAR could be used to identify areas where thick oil had mixed with the surface seawater to form emulsions, which are mixtures of oil and seawater.

Identifying the type of oil in a spill is vital for assessing its potential harm and targeting response efforts. For example, thin oil consists of sheens that measure from less than 0.0002 inches (0.005 millimeters) to about 0.002 inches (0.05 millimeters) thick. Sheens generally form when little oil is released, as in the initial stages of a spill, or from lightweight, volatile components of spill material. Because sheens contain little oil volume, they weather and evaporate quickly, and are of minor concern from an environmental standpoint. Oil emulsions, on the other hand, are 0.04 inches (1 millimeter) thick, contain more oil, and persist on the ocean surface for much longer, thereby potentially having a greater environmental impact in the open sea and along the shoreline.

"Knowing the type of oil tells us a lot about the thickness of the oil in that area," said Jones.

The researchers acquired data in June 2010 along more than 3,400 miles (5,500 kilometers) of flight lines over an area of more than 46,330 square miles (120,000 square kilometers), primarily along the Gulf Coast. They found that at the time the slick was imaged by UAVSAR, much of the surface layer of the Deepwater Horizon spill's main slick consisted of thick oil emulsions.

UAVSAR characterizes an oil spill by detecting variations in the roughness of its surface and, for thick slicks, changes in the electrical conductivity of its surface layer. Just as an airport runway looks smooth compared to surrounding fields, UAVSAR "sees" an oil spill at sea as a smoother (radar-dark) area against the rougher (radar-bright) ocean surface because most of the radar energy that hits the smoother surface is deflected away from the radar antenna. UAVSAR's high sensitivity and other capabilities enabled the team to separate thick and thin oil for the first time using a radar system.

"We knew we were going to detect the extent of the spill," said Holt. "But we had this great new instrument, so we wanted to see how it would work in this extreme situation, and it turned out to be really unique and valuable, beyond all previous radar results for spills."

"We studied an unprecedented event using data collected by a sophisticated instrument and were able to show that there was a lot more information contained in the data than was apparent when we began," said Minchew. "This is a good example of how the tools of science could be used to help mitigate disasters in real time."

UAVSAR is returning to the Gulf of Mexico area this month and will image the area around the Deepwater Horizon site to look for leaks. In the future, UAVSAR data may be combined with imaging spectroscopic data from JPL's Airborne Visible/Infrared Imaging Spectrometer (AVIRIS) instrument to further improve the ability to characterize oil spills under a broader range of environmental conditions.

In addition to characterizing the oil slick, UAVSAR imaged most of the U.S. Gulf of Mexico coastline, extending from the Florida Keys to Corpus Christi, Texas, with extensive inland coverage of the southern Louisiana wetlands around Barataria Bay, the terrestrial ecosystem that ultimately sustained the greatest oiling from the massive spill. Researchers tracked the movement of the oil into coastal waterways and marshlands, monitored impact and recovery of oil-affected wetlands, and assessed how UAVSAR can support emergency responders in future disasters.

UAVSAR is also used to detect detailed Earth movements related to earthquakes, volcanoes and glaciers, as well as for soil moisture and forestry biomass studies. For more on UAVSAR, see: http://uavsar.jpl.nasa.gov/mission_flights.html .

Results of this study are published this month in the Institute of Electrical and Electronics Engineers journal Transactions on Geoscience and Remote Sensing. Caltech manages JPL for NASA.