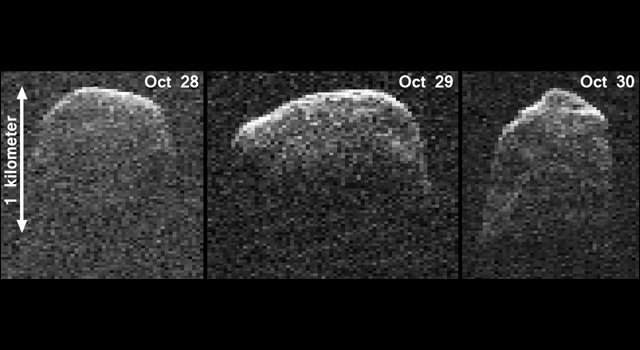 Scientists working with NASA's 230-foot-wide (70-meter) Deep Space Network antenna at Goldstone, Calif., have obtained several radar images depicting near-Earth asteroid 2007 PA8. The images were generated from data collected at Goldstone on Oct. 28, 29 and 30, 2012. The asteroid's distance from Earth on Oct. 28 was 6.5 million miles (10 million kilometers). The asteroid's distance to Earth was 5.6 million miles (9 million kilometers) on Oct. 30. The perspective in the images is analogous to seeing the asteroid from above its north pole. Each of the three images is shown at the same scale.

The radar images of asteroid 2007 PA8 indicate that it is an elongated, irregularly shaped object approximately one mile (1.6 kilometers) wide, with ridges and perhaps craters. The data also indicate that 2007 PA8 rotates very slowly, roughly once every three to four days.

JPL scientists chose to image asteroid 2007 PA8 due to its size and relative proximity to Earth at the point of closest approach. On Nov. 5 at 8:42 a.m. PST (11:42 a.m. EST /16:42 UTC), the space rock was about four million miles (6.5 million kilometers) from Earth, or 17 times the distance between Earth and the moon. The trajectory of asteroid 2007 PA8 is well understood. This flyby was the closest Earth approach by this asteroid for at least the next 200 years.