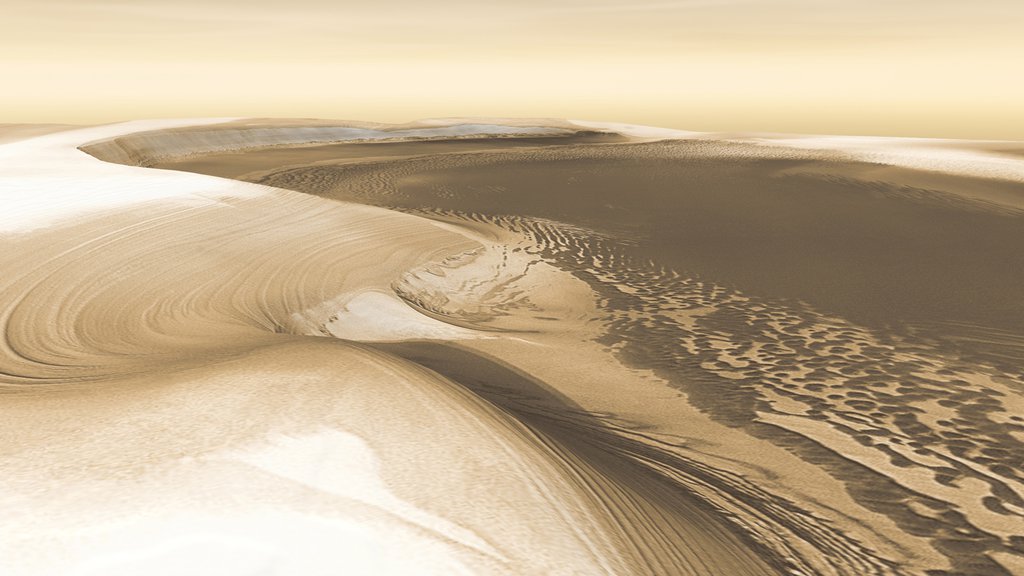 Climatic cycles of ice and dust build the Martian polar caps, season by season, year by year, and periodically whittle down their size when the climate changes. This image is a simulated 3-D perspective view, created from image data taken by the THEMIS instrument on NASA's Mars Odyssey spacecraft.› Full caption and related image
Credit: NASA/JPL/Arizona State University, R. Luk 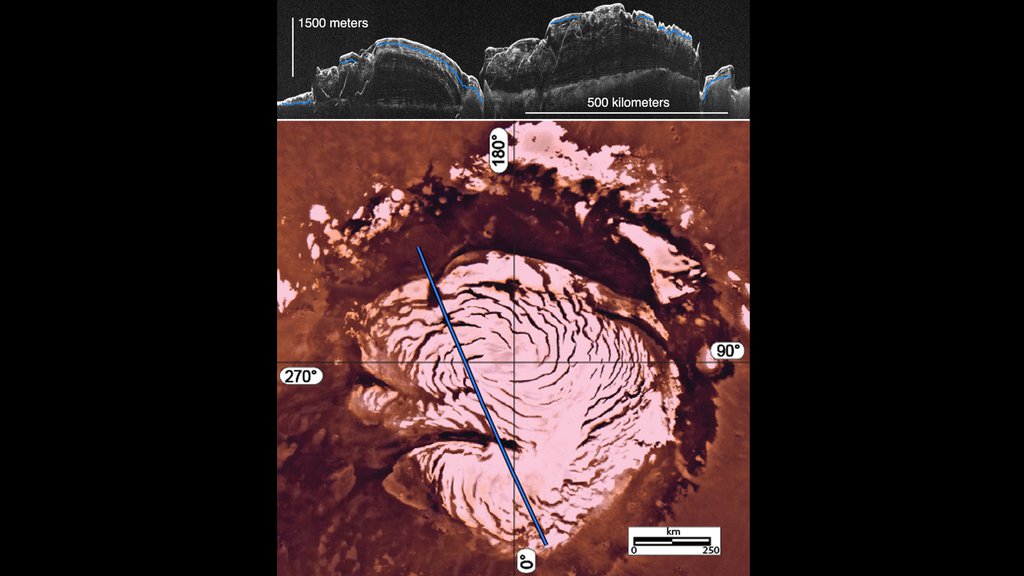 By analyzing radar images like the one at top of this montage, scientists discovered evidence for a past ice age in the northern polar ice cap of Mars.› Full image and caption
Credit: NASA/JPL-Caltech/Sapienza University of Rome

The new results agree with previous models that indicate a glacial period ended about 400,000 years ago, as well as predictions about how much ice would have been accumulated at the poles since then.

The results, published in the May 27 issue of the journal Science, help refine models of the Red Planet's past and future climate by allowing scientists to determine how ice moves between the poles and mid-latitudes, and in what volumes.

Mars has bright polar caps of ice that are easily visible from telescopes on Earth. A seasonal cover of carbon-dioxide ice and snow is observed to advance and retreat over the poles during the Martian year. During summertime in the planet's north, the remaining northern polar cap is all water ice; the southern cap is water ice as well, but remains covered by a relatively thin layer of carbon dioxide ice even in southern summertime.

But Mars also undergoes variations in its tilt and the shape of its orbit over hundreds of thousands of years. These changes cause substantial shifts in the planet's climate, including ice ages. Earth has similar, but less variable, phases called Milankovitch cycles.

Scientists use data from MRO's Shallow Subsurface Radar (SHARAD) to produce images called radargrams that are like vertical slices though the layers of ice and dust that comprise the Martian polar ice deposits. For the new study, researchers analyzed hundreds of such images to look for variations in the layer properties.

The researchers identified a boundary in the ice that extends across the entire north polar cap. Above the boundary, the layers accumulated very quickly and uniformly, compared with the layers below them.

"The layers in the upper few hundred meters display features that indicate a period of erosion, followed by a period of rapid accumulation that is still occurring today," said planetary scientist Isaac Smith, the study's lead author. Smith led the work while at Southwest Research Institute in Boulder, Colorado, but is now at the Planetary Science Institute in Tucson, Arizona.

On Earth, ice ages take hold when the polar regions and high latitudes become cooler than average for thousands of years, causing glaciers to grow toward the mid-latitudes. In contrast, the Martian variety occurs when -- as a result of the planet's increased tilt -- its poles become warmer than lower latitudes. During these periods, the polar caps retreat and water vapor migrates toward the equator, forming ground ice and glaciers at mid-latitudes. As the warm polar period ends, polar ice begins accumulating again, while ice is lost from mid-latitudes. This retreat and regrowth of polar ice is exactly what Smith and colleagues see in the record revealed by the SHARAD radar images.

An increase in polar ice following a mid-latitude ice age is also expected from climate models that show how ice moves around based on Mars' orbital properties, especially its tilt. These models predict the last Martian ice age ended about 400,000 years ago, as the poles began to cool relative to the equator. Models suggest that since then, the polar deposits would have thickened by about 980 feet (300 meters).

The upper unit identified by Smith and colleagues reaches a maximum thickness of 1,050 feet (320 meters) across the polar cap, which is equivalent to a 2-foot-thick (60-centimeter-thick) global layer of ice. That is essentially the same as model predictions made by other researchers in 2003 and 2007.

After 10 years in orbit, Mars Reconnaissance and its six science instruments are still in excellent shape. "The longevity of the mission has enabled more thorough and improved radar coverage of the Martian poles," said Richard Zurek, the mission's project scientist at NASA's Jet Propulsion Laboratory, Pasadena, California. "Our long life in orbit and powerful 3-D analysis tools are allowing scientists to unravel Mars' past climate history."