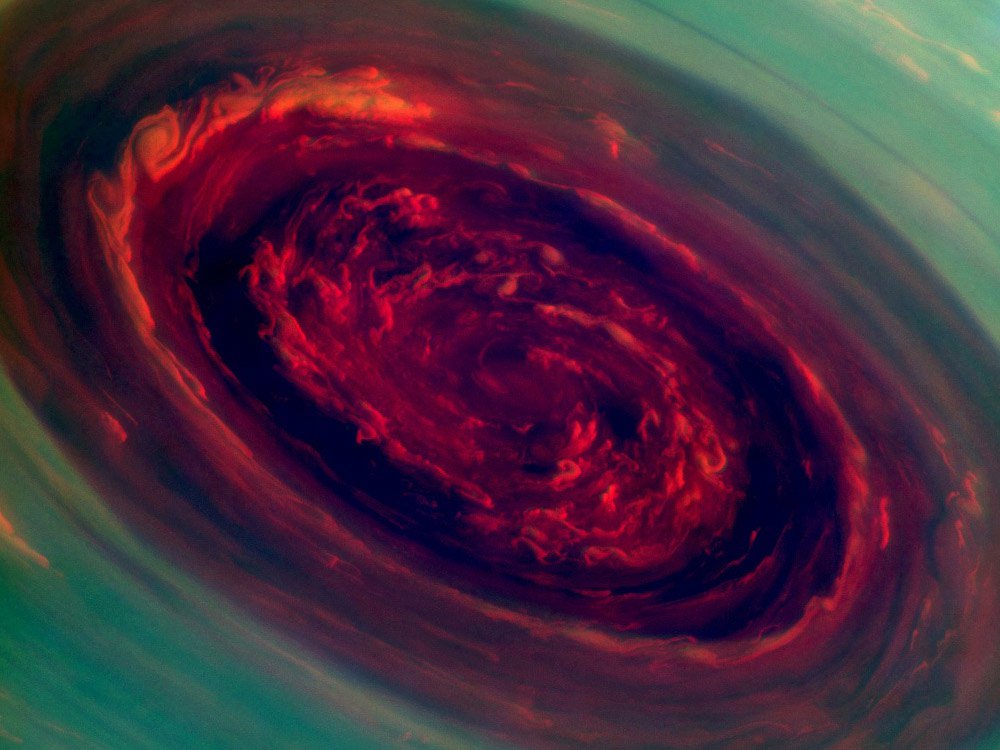 The spinning vortex of Saturn's north polar storm resembles a deep red rose of giant proportions surrounded by green foliage in this false-color image from NASA's Cassini spacecraft. Measurements have sized the eye at a staggering 1,250 miles (2,000 kilometers) across with cloud speeds as fast as 330 miles per hour (150 meters per second).› Full image and caption
Credit: NASA/JPL-Caltech/SSI 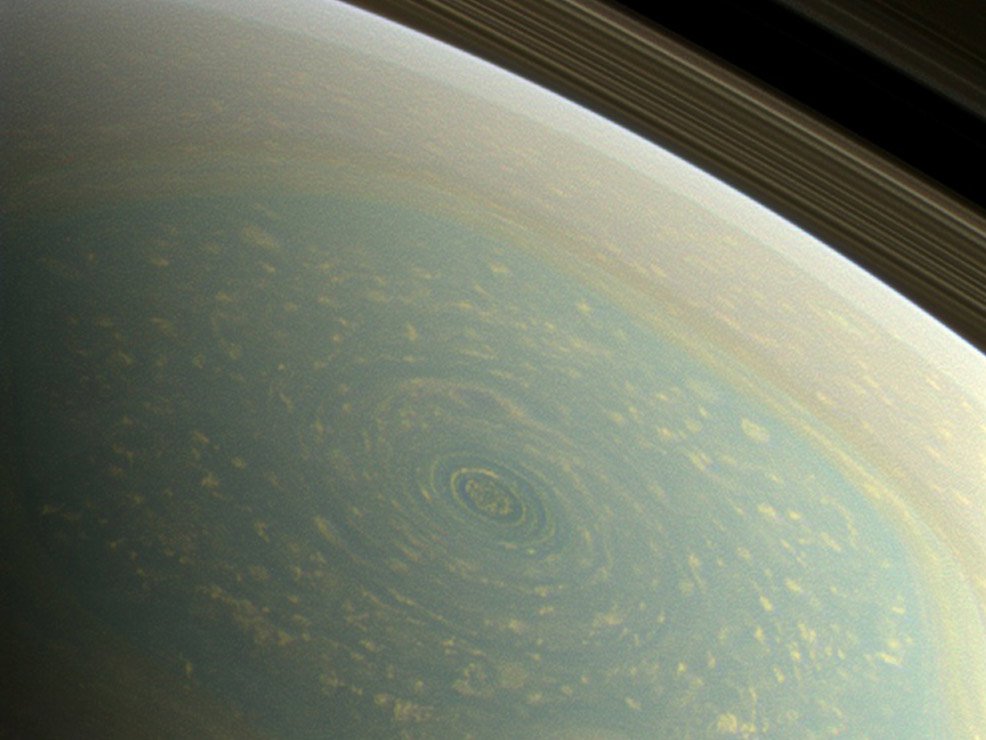 The north pole of Saturn, in the fresh light of spring, is revealed in this color image from NASA's Cassini spacecraft.› Full image and caption
Credit: NASA/JPL-Caltech/SSI 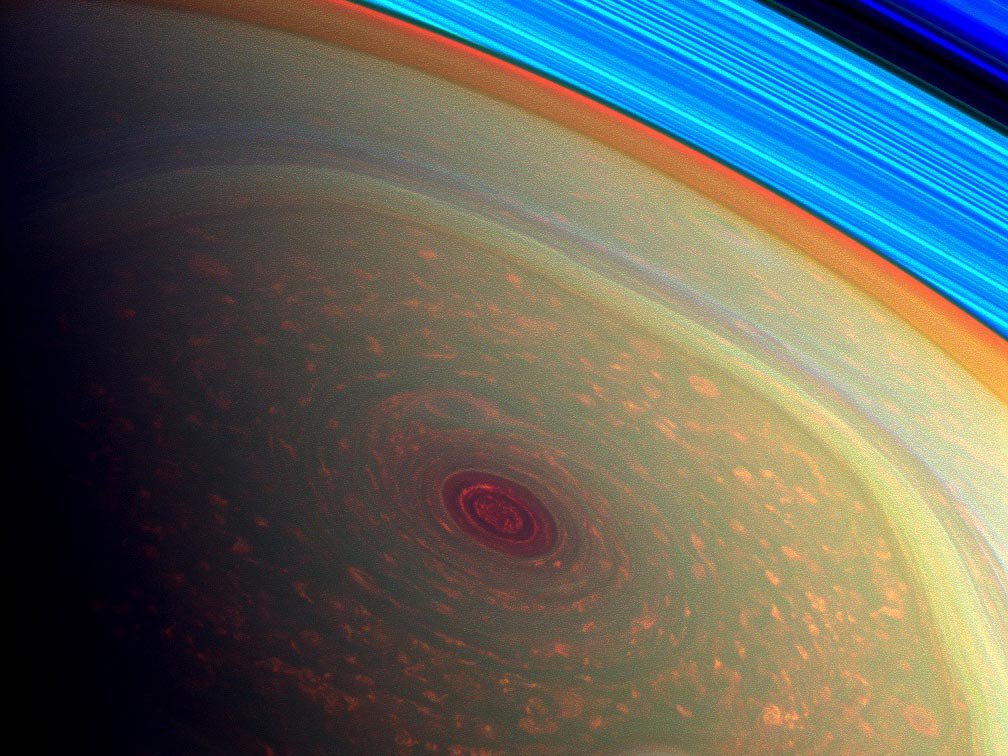 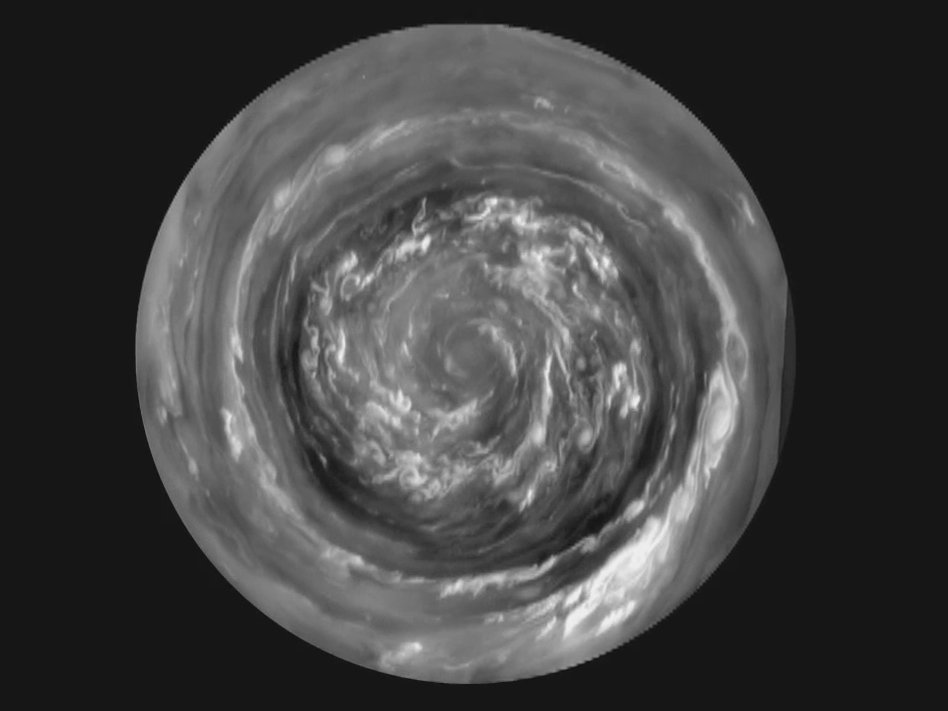 This movie, made from images obtained by NASA's Cassini spacecraft, shows the clouds of a hurricane-like storm, which circulate around the north pole of Saturn out to 88.5 degrees north latitude.› Play video
Credit: NASA/JPL-Caltech/Space Science Institute/Hampton University 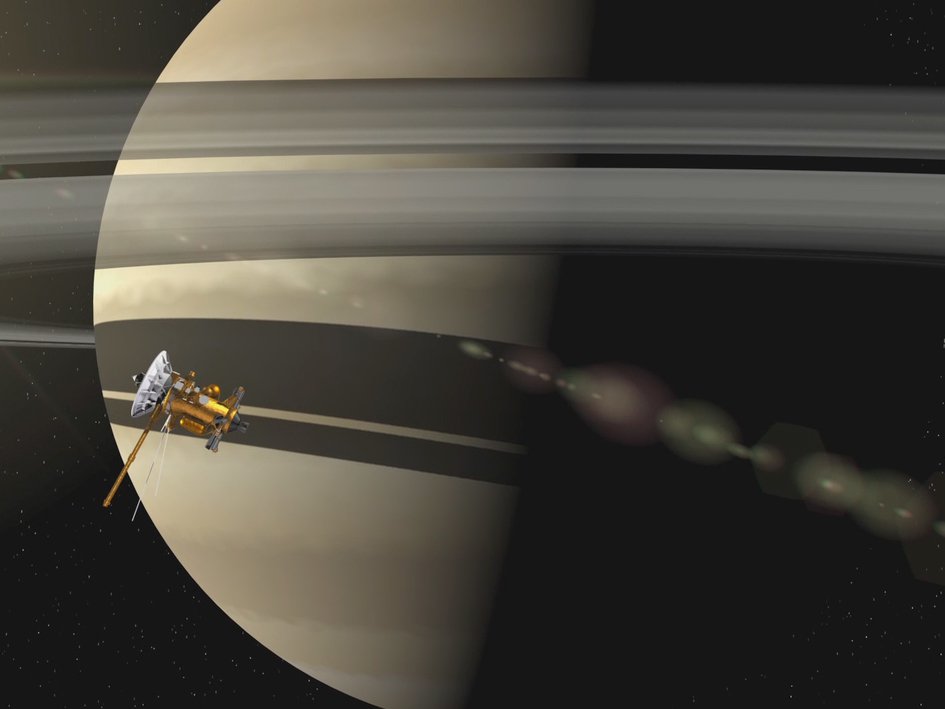 In high-resolution pictures and video, scientists see the hurricane's eye is about 1,250 miles (2,000 kilometers) wide, 20 times larger than the average hurricane eye on Earth. Thin, bright clouds at the outer edge of the hurricane are traveling 330 mph(150 meters per second). The hurricane swirls inside a large, mysterious, six-sided weather pattern known as the hexagon.

"We did a double take when we saw this vortex because it looks so much like a hurricane on Earth," said Andrew Ingersoll, a Cassini imaging team member at the California Institute of Technology in Pasadena. "But there it is at Saturn, on a much larger scale, and it is somehow getting by on the small amounts of water vapor in Saturn's hydrogen atmosphere."

Scientists will be studying the hurricane to gain insight into hurricanes on Earth, which feed off warm ocean water. Although there is no body of water close to these clouds high in Saturn's atmosphere, learning how these Saturnian storms use water vapor could tell scientists more about how terrestrial hurricanes are generated and sustained.

Both a terrestrial hurricane and Saturn's north polar vortex have a central eye with no clouds or very low clouds. Other similar features include high clouds forming an eye wall, other high clouds spiraling around the eye, and a counter-clockwise spin in the northern hemisphere.

A major difference between the hurricanes is that the one on Saturn is much bigger than its counterparts on Earth and spins surprisingly fast. At Saturn, the wind in the eye wall blows more than four times faster than hurricane-force winds on Earth. Unlike terrestrial hurricanes, which tend to move, the Saturnian hurricane is locked onto the planet's north pole. On Earth, hurricanes tend to drift northward because of the forces acting on the fast swirls of wind as the planet rotates. The one on Saturn does not drift and is already as far north as it can be.

"The polar hurricane has nowhere else to go, and that's likely why it's stuck at the pole," said Kunio Sayanagi, a Cassini imaging team associate at Hampton University in Hampton, Va.

Scientists believe the massive storm has been churning for years. When Cassini arrived in the Saturn system in 2004, Saturn's north pole was dark because the planet was in the middle of its north polar winter. During that time, the Cassini spacecraft's composite infrared spectrometer and visual and infrared mapping spectrometer detected a great vortex, but a visible-light view had to wait for the passing of the equinox in August 2009. Only then did sunlight begin flooding Saturn's northern hemisphere. The view required a change in the angle of Cassini's orbits around Saturn so the spacecraft could see the poles.

"Such a stunning and mesmerizing view of the hurricane-like storm at the north pole is only possible because Cassini is on a sportier course, with orbits tilted to loop the spacecraft above and below Saturn's equatorial plane," said Scott Edgington, Cassini deputy project scientist at NASA's Jet Propulsion Laboratory in Pasadena, Calif. "You cannot see the polar regions very well from an equatorial orbit. Observing the planet from different vantage points reveals more about the cloud layers that cover the entirety of the planet."

Cassini changes its orbital inclination for such an observing campaign only once every few years. Because the spacecraft uses flybys of Saturn's moon Titan to change the angle of its orbit, the inclined trajectories require attentive oversight from navigators. The path requires careful planning years in advance and sticking very precisely to the planned itinerary to ensure enough propellant is available for the spacecraft to reach future planned orbits and encounters.

Images and two versions of a movie of the hurricane can be viewed online at: http://go.nasa.gov/17tmHzo .