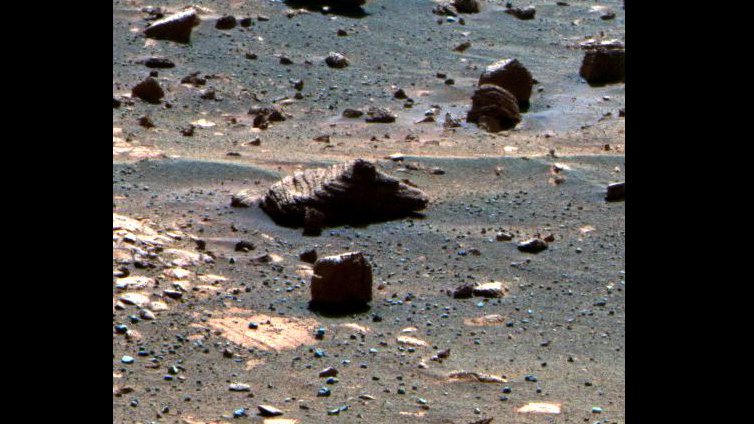 This view results from the observation of a target selected autonomously by AEGIS onboard the Opportunity Mars rover. This particular target (a piece of crater ejecta near the Mars Concepción crater) was detected on sol 2172, or March 4, 2010, and the image was captured by the Opportunity's Panoramic Camera.› Full image and caption
Credit: NASA/JPL-Caltech

PASADENA, Calif., - Autonomous Exploration for Gathering Increased Science (AEGIS), novel autonomy software that has been operating on the Mars Exploration Rover Opportunity since December 2009, is NASA's 2011 Software of the Year recipient.

The AEGIS software, developed by NASA's Jet Propulsion Laboratory in Pasadena, Calif., autonomously directs Opportunity's cameras to interesting science targets. AEGIS was developed to enhance the usual targeting process involving scientists on the ground, which can require the rover to stay in the same place for a day or more while data are transmitted to Earth and targets are selected from preliminary images.

With AEGIS, the rover software analyzes images onboard, detects and prioritizes science targets in those images, and autonomously obtains novel, high-quality science data of the selected targets, within 45 minutes, with no communication back to Earth required. AEGIS chooses science targets based on pre-specified criteria set by the mission science team.

AEGIS can be used as soon as the rover reaches a new area and is especially beneficial during and after long drives. It enables high-quality data to be collected more often and in a significantly reduced time frame.  The incorporation of AEGIS in the Mars Science Laboratory flight software is in progress, and it is also being considered for future NASA missions.

The AEGIS capability was developed as part of a larger autonomous science framework called OASIS (short for Onboard Autonomous Science Investigation System), which is designed to allow a rover to identify and react to serendipitous science opportunities. The AEGIS system takes advantage of the OASIS ability to detect and characterize interesting terrain features in rover images. This technology was created with assistance from NASA's Mars Exploration Rover Project and with funding from the New Millennium Program, the Mars Technology Program, the JPL Research and Technology Development Program, the JPL Interplanetary Network Development Program and the Intelligent Systems Program.