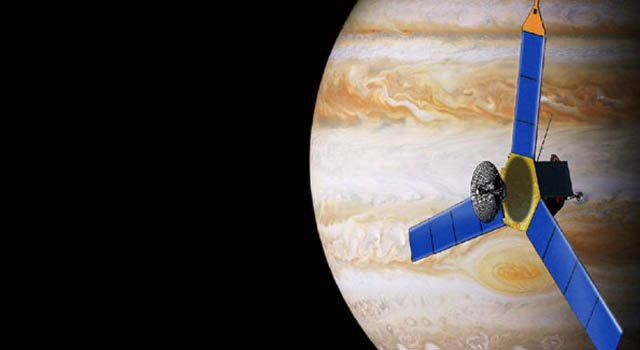 NASA is officially moving forward on a mission to conduct an unprecedented, in-depth study of Jupiter.

WASHINGTON -- NASA is officially moving forward on a mission to conduct an unprecedented, in-depth study of Jupiter.

Called Juno, the mission will be the first in which a spacecraft is placed in a highly elliptical polar orbit around the giant planet to understand its formation, evolution and structure. Underneath its dense cloud cover, Jupiter safeguards secrets to the fundamental processes and conditions that governed our early solar system.

"Jupiter is the archetype of giant planets in our solar system and formed very early, capturing most of the material left after the sun formed," said Scott Bolton, Juno principal investigator from the Southwest Research Institute in San Antonio. "Unlike Earth, Jupiter's giant mass allowed it to hold onto its original composition, providing us with a way of tracing our solar system's history."

The spacecraft is scheduled to launch aboard an Atlas rocket from Cape Canaveral, Fla., in August 2011, reaching Jupiter in 2016. The spacecraft will orbit Jupiter 32 times, skimming about 4,800 kilometers (3,000 miles) over the planet's cloud tops for approximately one year. The mission will be the first solar powered spacecraft designed to operate despite the great distance from the sun.

"Jupiter is more than 644 million kilometers (400 million miles) from the sun or five times further than Earth," Bolton said. "Juno is engineered to be extremely energy efficient."

The spacecraft will use a camera and nine science instruments to study the hidden world beneath Jupiter's colorful clouds. The suite of science instruments will investigate the existence of an ice-rock core, Jupiter's intense magnetic field, water and ammonia clouds in the deep atmosphere, and explore the planet's aurora borealis.

"In Greek and Roman mythology, Jupiter's wife Juno peered through Jupiter's veil of clouds to watch over her husband's mischief," said Professor Toby Owen, co-investigator at the University of Hawaii in Honolulu. "Our Juno looks through Jupiter's clouds to see what the planet is up to, not seeking signs of misbehavior, but searching for whispers of water, the ultimate essence of life."

Understanding the formation of Jupiter is essential to understanding the processes that led to the development of the rest of our solar system and what the conditions were that led to Earth and humankind. Similar to the sun, Jupiter is composed mostly of hydrogen and helium. A small percentage of the planet is composed of heavier elements. However, Jupiter has a larger percentage of these heavier elements than the sun.

"Juno's extraordinarily accurate determination of the gravity and magnetic fields of Jupiter will enable us to understand what is going on deep down in the planet," said Professor Dave Stevenson, co-investigator at the California Institute of Technology in Pasadena. "These and other measurements will inform us about how Jupiter's constituents are distributed, how Jupiter formed and how it evolved, which is a central part of our growing understanding of the nature of our solar system."

Deep in Jupiter's atmosphere, under great pressure, hydrogen gas is squeezed into a fluid known as metallic hydrogen. At these great depths, the hydrogen acts like an electrically conducting metal which is believed to be the source of the planet's intense magnetic field. Jupiter also may have a rocky solid core at the center.

"Juno gives us a fantastic opportunity to get a picture of the structure of Jupiter in a way never before possible," said James Green, director of NASA's Planetary Division at NASA Headquarters in Washington. "It will allow us to take a giant step forward in our understanding on how giant planets form and the role that plays in putting the rest of the solar system together. "

The Juno mission is the second spacecraft designed under NASA's New Frontiers Program. The first was the Pluto New Horizons mission, launched in January 2006 and scheduled to reach Pluto's moon Charon in 2015. The program provides opportunities to carry out several medium-class missions identified as top priority objectives in the Decadal Solar System Exploration Survey, conducted by the Space Studies Board of the National Research Council in Washington.

NASA's Jet Propulsion Laboratory in Pasadena, Calif., manages the Juno mission. Lockheed Martin of Denver is building the spacecraft. The Italian Space Agency is contributing an infrared spectrometer instrument and a portion of the radio science experiment.

For more information about the Juno mission, visit: http://juno.nasa.gov