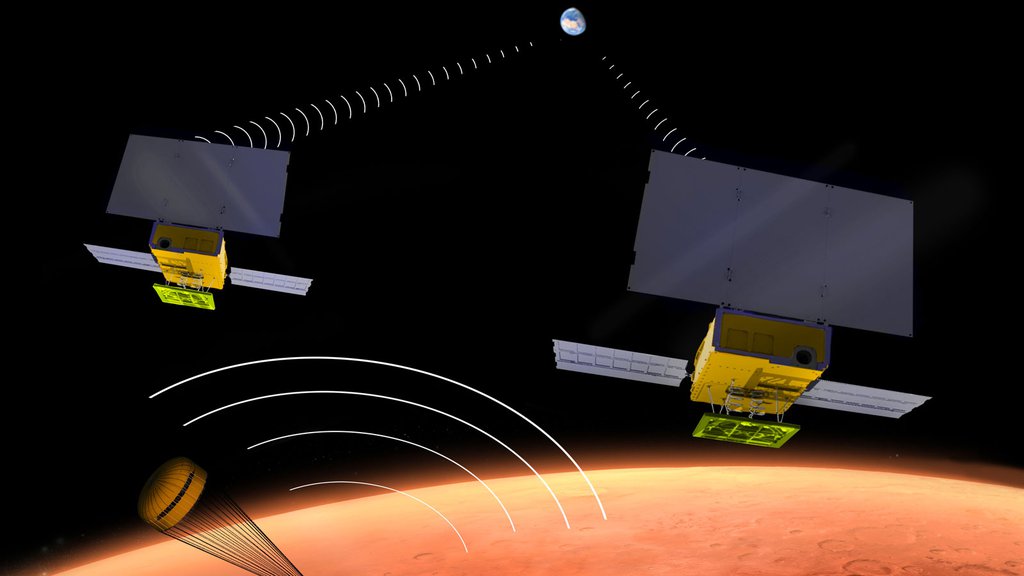 NASA's two small MarCO CubeSats will be flying past Mars in 2016 just as NASA's next Mars lander, InSight, is descending through the Martian atmosphere and landing on the surface. MarCO, for Mars Cube One, will provide an experimental communications relay to inform Earth quickly about the landing.› Full image and caption
Credit: NASA/JPL-Caltech 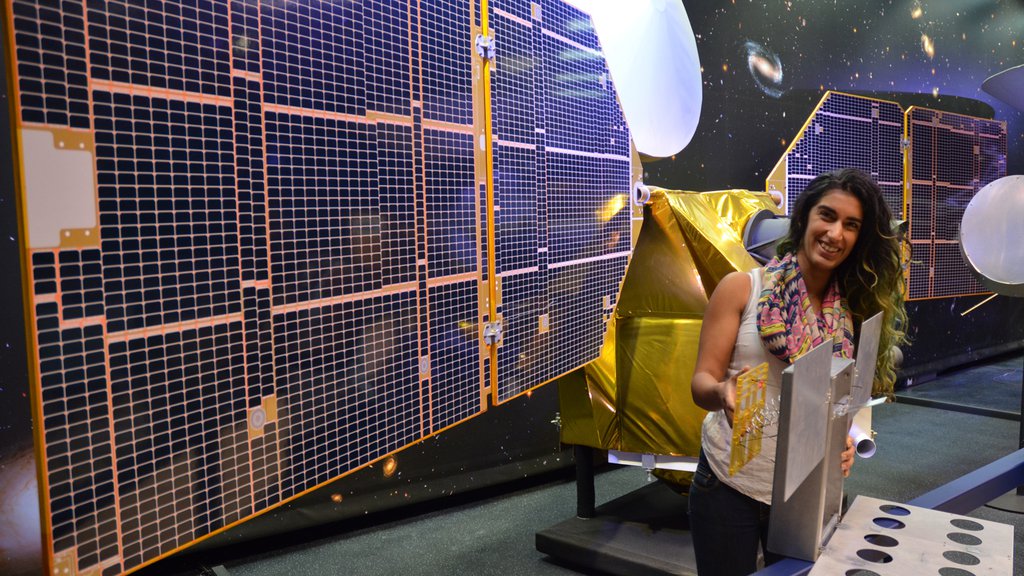 The full-scale mock-up of NASA's MarCO CubeSat held by Farah Alibay, a systems engineer for the technology demonstration, is dwarfed by the one-half-scale model of NASA's Mars Reconnaissance Orbiter behind her.› Full image and caption
Credit: NASA/JPL-Caltech 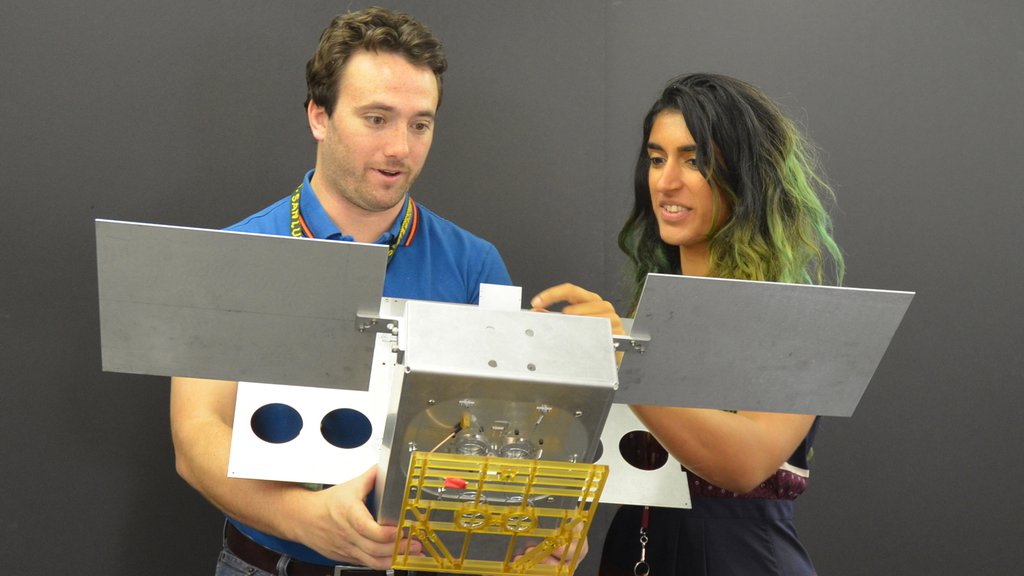 Engineers for NASA's MarCO Project display a full-scale mechanical mock-up of the small craft in development as part of NASA's next mission to Mars. Mechanical engineer Joel Steinkraus and systems engineer Farah Alibay are on the JPL team preparing twin MarCO (Mars Cube One) CubeSats for a March 2016 launch.› Full image and caption
Credit: NASA/JPL-Caltech

When NASA launches its next mission on the journey to Mars - a stationary lander in 2016 - the flight will include the first two CubeSats sent to deep space.

When NASA launches its next mission on the journey to Mars - a stationary lander in 2016 - the flight will include two CubeSats. This will be the first time CubeSats have flown in deep space. If this flyby demonstration is successful, the technology will provide NASA the ability to quickly transmit status information about the main spacecraft after it lands on Mars.

The twin communications-relay CubeSats, being built by NASA's Jet Propulsion Laboratory, Pasadena, California, constitute a technology demonstration called Mars Cube One (MarCO). CubeSats are a class of spacecraft based on a standardized small size and modular use of off-the-shelf technologies. Many have been made by university students, and dozens have been launched into Earth orbit using extra payload mass available on launches of larger spacecraft.

MarCO will launch in March 2016 from Vandenberg Air Force Base, California, on the same United Launch Alliance Atlas V rocket as NASA's Interior Exploration using Seismic Investigations, Geodesy and Heat Transport (InSight) lander. InSight is NASA's first mission devoted to understanding the interior structure of the Red Planet. MarCO will fly by Mars while InSight is landing, in September 2016.

"MarCO is an experimental capability that has been added to the InSight mission, but is not needed for mission success," said Jim Green, director of NASA's planetary science division at the agency's headquarters in Washington. "MarCO will fly independently to Mars."

During InSight's entry, descent and landing (EDL) operations on Sept. 28, 2016, the lander will transmit information in the UHF radio band to NASA's Mars Reconnaissance Orbiter (MRO) flying overhead. MRO will forward EDL information to Earth using a radio frequency in the X band, but cannot simultaneously receive information over one band while transmitting on another. Confirmation of a successful landing could be received by the orbiter more than an hour before it's relayed to Earth.

The two CubeSats will separate from the Atlas V booster after launch and travel along their own trajectories to the Red Planet. After release from the launch vehicle, MarCO's first challenges are to deploy two radio antennas and two solar panels. The high-gain, X-band antenna is a flat panel engineered to direct radio waves the way a parabolic dish antenna does. MarCO will be navigated to Mars independently of the InSight spacecraft, with its own course adjustments on the way.

Ultimately, if the MarCO demonstration mission succeeds, it could allow for a "bring-your-own" communications relay option for use by future Mars missions in the critical few minutes between Martian atmospheric entry and touchdown.

By verifying CubeSats are a viable technology for interplanetary missions, and feasible on a short development timeline, this technology demonstration could lead to many other applications to explore and study our solar system.

For information about MarCO, visit:

For information about InSight, visit: