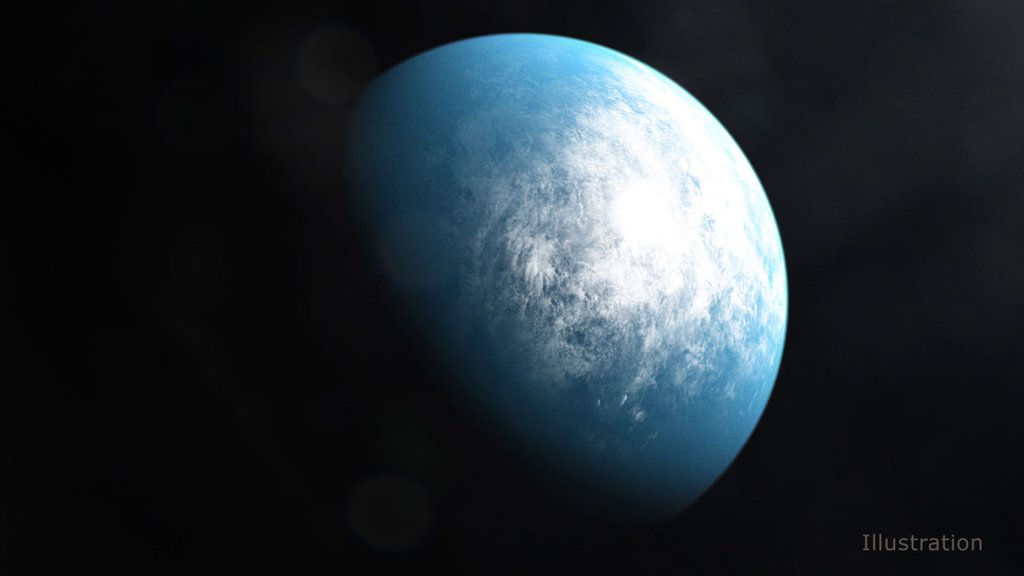 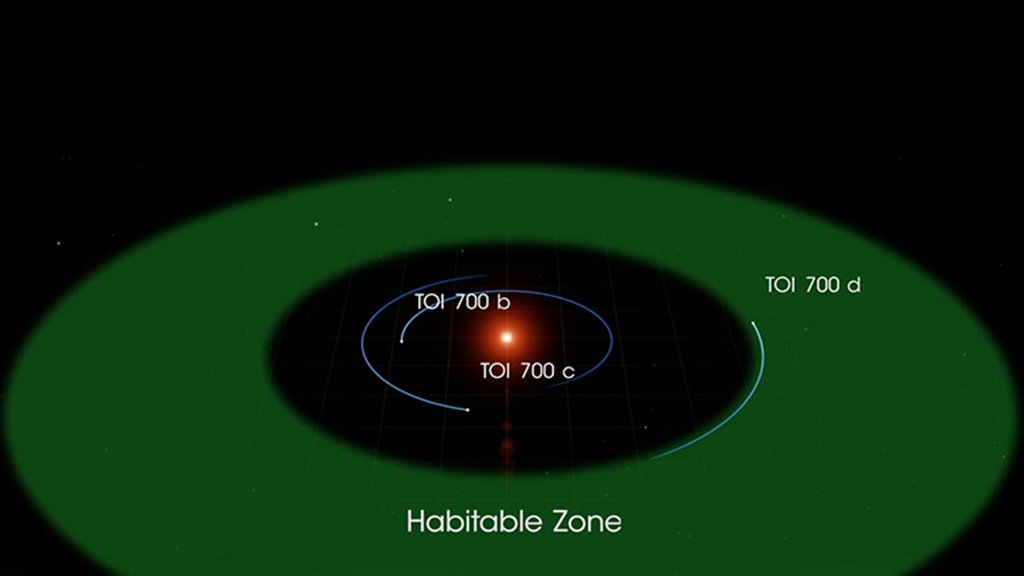 This illustration of TOI 700 d is based on several simulated environments for an ocean-covered version of the planet.› Full image and caption
Credit: NASA's Goddard Space Flight Center

The planet, TOI 700d, is the first Earth-size habitable-zone planet discovered by NASA's Transiting Exoplanet Survey Satellite. It was confirmed by the Spitzer Space Telescope.

TOI 700 d is one of only a few Earth-size planets discovered in a star's habitable zone so far. Others include several planets in the TRAPPIST-1 system and other worlds discovered by NASA's Kepler Space Telescope.

"TESS was designed and launched specifically to find Earth-sized planets orbiting nearby stars," said Paul Hertz, astrophysics division director at NASA Headquarters in Washington. "Planets around nearby stars are easiest to follow-up with larger telescopes in space and on Earth. Discovering TOI 700 d is a key science finding for TESS. Confirming the planet's size and habitable zone status with Spitzer is another win for Spitzer as it approaches the end of science operations this January."

TESS monitors large swaths of the sky, called sectors, for 27 days at a time. This long stare allows the satellite to track changes in stellar brightness caused by an orbiting planet crossing in front of its star from our perspective, an event called a transit.

TOI 700 is a small, cool M dwarf star located just over 100 light-years away in the southern constellation Dorado. It's roughly 40% of the Sun's mass and size and about half its surface temperature. The star appears in 11 of the 13 sectors TESS observed during the mission's first year, and scientists caught multiple transits by its three planets.

The star was originally misclassified in the TESS database as being more similar to our Sun, which meant the planets appeared larger and hotter than they really are. Several researchers, including Alton Spencer, a high school student working with members of the TESS team, identified the error.

"When we corrected the star's parameters, the sizes of its planets dropped, and we realized the outermost one was about the size of Earth and in the habitable zone," said Emily Gilbert, a graduate student at the University of Chicago. "Additionally, in 11 months of data we saw no flares from the star, which improves the chances TOI 700 d is habitable and makes it easier to model its atmospheric and surface conditions."

Gilbert and other researchers presented the findings at the 235th meeting of the American Astronomical Society in Honolulu, and three papers - one of which Gilbert led - have been submitted to scientific journals.

The innermost planet, called TOI 700 b, is almost exactly Earth-size, is probably rocky and completes an orbit every 10 days. The middle planet, TOI 700 c, is 2.6 times larger than Earth - between the sizes of Earth and Neptune - orbits every 16 days and is likely a gas-dominated world. TOI 700 d, the outermost known planet in the system and the only one in the habitable zone, measures 20% larger than Earth, orbits every 37 days and receives from its star 86% of the energy that the Sun provides to Earth. All of the planets are thought to be tidally locked to their star, which means they rotate once per orbit so that one side is constantly bathed in daylight.

A team of scientists led by Joseph Rodriguez, an astronomer at the Center for Astrophysics ' Harvard & Smithsonian in Cambridge, Massachusetts, requested follow-up observations with Spitzer to confirm TOI 700 d.

"Given the impact of this discovery - that it is TESS's first habitable-zone Earth-size planet - we really wanted our understanding of this system to be as concrete as possible," Rodriguez said. "Spitzer saw TOI 700 d transit exactly when we expected it to. It's a great addition to the legacy of a mission that helped confirm two of the TRAPPIST-1 planets and identify five more."

The Spitzer data increased scientists' confidence that TOI 700 d is a real planet and sharpened their measurements of its orbital period by 56% and its size by 38%. It also ruled out other possible astrophysical causes of the transit signal, such as the presence of a smaller, dimmer companion star in the system.

Rodriguez and his colleagues also used follow-up observations from a 1-meter ground-based telescope in the global Las Cumbres Observatory network to improve scientists' confidence in the orbital period and size of TOI 700 c by 30% and 36%, respectively.

Because TOI 700 is bright, nearby, and shows no sign of stellar flares, the system is a prime candidate for precise mass measurements by current ground-based observatories. These measurements could confirm scientists' estimates that the inner and outer planets are rocky and the middle planet is made of gas.

Future missions may be able to identify whether the planets have atmospheres and, if so, even determine their compositions.

While the exact conditions on TOI 700 d are unknown, scientists can use current information, like the planet's size and the type of star it orbits, to generate computer models and make predictions. Researchers at NASA's Goddard Space Flight Center in Greenbelt, Maryland, modeled 20 potential environments of TOI 700 d to gauge if any version would result in surface temperatures and pressures suitable for habitability.

Their 3D climate models examined a variety of surface types and atmospheric compositions typically associated with what scientists regard to be potentially habitable worlds. Because TOI 700 d is tidally locked to its star, the planet's cloud formations and wind patterns may be strikingly different from Earth's.

One simulation included an ocean-covered TOI 700 d with a dense, carbon-dioxide-dominated atmosphere similar to what scientists suspect surrounded Mars when it was young. The model atmosphere contains a deep layer of clouds on the star-facing side. Another model depicts TOI 700 d as a cloudless, all-land version of modern Earth, where winds flow away from the night side of the planet and converge on the point directly facing the star.

When starlight passes through a planet's atmosphere, it interacts with molecules like carbon dioxide and nitrogen to produce distinct signals, called spectral lines. The modeling team, led by Gabrielle Engelmann-Suissa, a Universities Space Research Association visiting research assistant at Goddard, produced simulated spectra for the 20 modeled versions of TOI 700 d.

"Someday, when we have real spectra from TOI 700 d, we can backtrack, match them to the closest simulated spectrum, and then match that to a model," Englemann-Suissa said. "It's exciting because no matter what we find out about the planet, it's going to look completely different from what we have here on Earth."

The Jet Propulsion Laboratory in Pasadena, California, manages the Spitzer Space Telescope mission for NASA's Science Mission Directorate in Washington. Science operations are conducted at the Spitzer Science Center at Caltech in Pasadena. Space operations are based at Lockheed Martin Space in Littleton, Colorado. Data are archived at the Infrared Science Archive housed at IPAC at Caltech. Caltech manages JPL for NASA.

The modeling work was funded through the Sellers Exoplanet Environments Collaboration at Goddard, a multidisciplinary collaboration that brings together experts to build comprehensive and sophisticated computer models to better analyze current and future exoplanet observations.