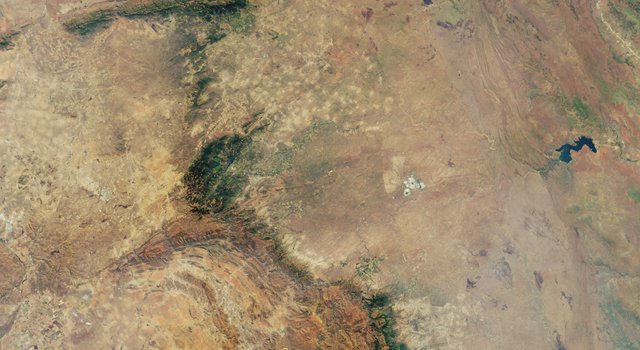 Downward-looking camera view of the area around Kruger National Park in northeastern South Africa, acquired Aug. 18, 2010, by the MISR instrument on NASA’s Terra spacecraft. The imaged area is 380 kilometers (236 miles) wide. The bright white feature above and to the right of image center is the Palabora Copper Mine, and the water body near upper right is Lake Massingir in Mozambique. Kruger National Park lies between these landmarks and stretches from north to south for some 350 kilometers (217 miles).› Full image and caption
Credit: NASA/GSFC/LaRC/JPL, MISR Team

A unique partnership between NASA and agencies in Africa and Europe has sent a massive amount of free NASA Earth science satellite data to South African researchers.

PASADENA, Calif. – A unique partnership between NASA and agencies in Africa and Europe has sent more than 30 terabytes of free Earth science satellite data to South African researchers to support sustainable development and environmental applications in Africa.

The data from one of the instruments on NASA's Terra satellite provide observations of Africa's surface and atmosphere, including vegetation structure, airborne pollution particles, cloud heights and winds. Transfer of these data to a distribution center in Africa will make it broadly accessible to African users who have not been able to remotely download the large data files because of limitations in the continent's Internet infrastructure.

The data are from the Multi-angle Imaging SpectroRadiometer (MISR) on Terra. NASA's Jet Propulsion Laboratory in Pasadena, Calif., built and manages the instrument, and NASA's Langley Research Center in Hampton, Va., processes, archives and distributes the data.

MISR has been making continuous measurements of Earth's surface and atmosphere for more than a decade. MISR observes the sunlit portion of Earth continuously, viewing the entire globe between 82 degrees north and 82 degrees south latitude every nine days. Instead of viewing Earth from a single perspective, the instrument collects images from nine widely spaced view angles.

"NASA is committed to helping governments, organizations and researchers around the world make effective use of Earth observation data to aid in environmental decision making," said Hal Maring, a program manager in the Earth Science Division of the Science Mission Directorate at NASA Headquarters in Washington. "These efforts support the goals of the Group on Earth Observations, a partnership of international agencies that promotes collaborative use of Earth science data."

South Africa's Council for Scientific and Industrial Research (CSIR) in Pretoria will distribute the data at no charge to the research community in the region. CSIR will facilitate access to the large volume of MISR data as part of its broad strategy of educating, training and transferring knowledge to the southern African research community.

"The data transfer can be seen as a birthday present from NASA to the newly-formed South African National Space Agency," said Bob Scholes, CSIR research group leader for ecosystem processes and dynamics. "It will kick-start a new generation of high-quality land surface products, with applications in climate change and avoiding desertification." Desertification is the gradual transformation of habitable land into desert due to climate change or destructive land use practices.

The partnership began in spring 2008, when MISR science team member Michel Verstraete of the European Commission Joint Research Centre Institute for Environment and Sustainability (JRC-IES) in Ispra, Italy, participated in an intensive CSIR field campaign to study the environment around Kruger National Park, a major wildlife reserve in South Africa. The researchers studied the area using direct, airborne and space-based measurements. During the campaign, Verstraete learned of the widespread interest by the South African research community in remote-sensing techniques and applications.

In response, JRC-IES and CSIR signed an agreement in July 2008 to facilitate the interaction and exchange of people, knowledge, data and software.

NASA became involved in the collaboration in 2009 after a training workshop for MISR users in Cape Town, South Africa, organized by JPL and Langley Research Center. Although the workshop sparked interest in the potential use of MISR data, it soon became apparent that accessing a large volume of data was a major hurdle for research and applications in developing countries in general and Africa in particular. While Internet connectivity in Africa has improved greatly in recent years, access and bandwidth remain too limited to support downloading vast data files. This led CSIR to host the data directly.

NASA shipped most of the data on high-density tapes this summer. The agencies will ensure the database stays updated with current MISR observations by upgrading connectivity and facilitating sharing of data among participating academic and research institutions.

"This multi-party collaboration will significantly strengthen academic and research institutions in southern Africa and support sustainable development of the entire subcontinent," said Verstraete, who will spend six months in southern Africa next year to help the regional remote-sensing community use the data.