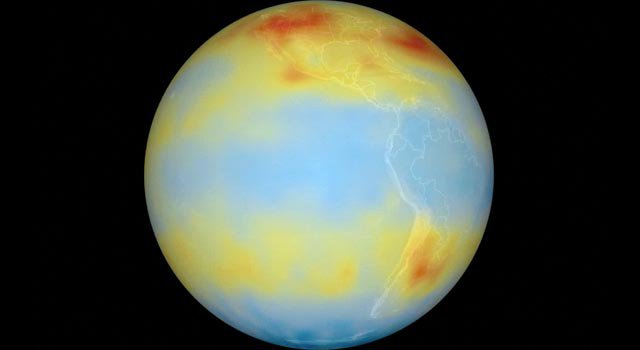 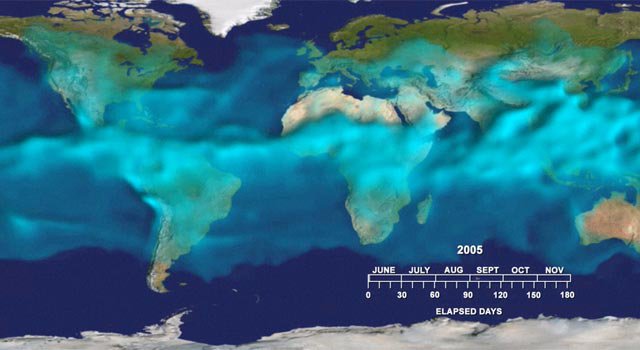 Animation of the 3-D transport and distribution of water vapor as measured by AIRS from June through November 2005.› Play animation (Quicktime)
Credit: NASA | |

Researchers studying carbon dioxide, a leading greenhouse gas and a key driver of global climate change, now have a new tool at their disposal.

WASHINGTON – Researchers studying carbon dioxide, a leading greenhouse gas and a key driver of global climate change, now have a new tool at their disposal: daily global measurements of carbon dioxide in a key part of our atmosphere. The data are courtesy of the Atmospheric Infrared Sounder (AIRS) instrument on NASA's Aqua spacecraft.

Moustafa Chahine, the instrument's science team leader at NASA's Jet Propulsion Laboratory, Pasadena, Calif., unveiled the new product at a briefing on recent breakthroughs in greenhouse gas, weather and climate research from AIRS at this week's American Geophysical Union meeting in San Francisco. The new data, which span the seven-plus years of the AIRS mission, measure the concentration and distribution of carbon dioxide in the mid-troposphere--the region of Earth's atmosphere that is located between 5 to 12 kilometers, or 3 to 7 miles, above Earth's surface. They also track its global transport. The product represents the first-ever release of global carbon dioxide data that are based solely on observations. The data have been extensively validated against both aircraft and ground-based observations.

"AIRS provides the highest accuracy and yield of any global carbon dioxide data set available to the research community, now and for the immediate future," said Chahine. "It will help researchers understand how this elusive, long-lived greenhouse gas is distributed and transported, and can be used to develop better models to identify 'sinks,' regions of the Earth system that store carbon dioxide. It's important to study carbon dioxide in all levels of the troposphere."

Chahine said previous AIRS research data have led to some key findings about mid-tropospheric carbon dioxide. For example, the data have shown that, contrary to prior assumptions, carbon dioxide is not well mixed in the troposphere, but is rather "lumpy." Until now, models of carbon dioxide transport have assumed its distribution was uniform.

In another major finding, scientists using AIRS data have removed most of the uncertainty about the role of water vapor in atmospheric models. The data are the strongest observational evidence to date for how water vapor responds to a warming climate.

Dessler explained that most of the warming caused by carbon dioxide does not come directly from carbon dioxide, but from effects known as feedbacks. Water vapor is a particularly important feedback. As the climate warms, the atmosphere becomes more humid. Since water is a greenhouse gas, it serves as a powerful positive feedback to the climate system, amplifying the initial warming. AIRS measurements of water vapor reveal that water greatly amplifies warming caused by increased levels of carbon dioxide. Comparisons of AIRS data with models and re-analyses are in excellent agreement.

"The implication of these studies is that, should greenhouse gas emissions continue on their current course of increase, we are virtually certain to see Earth's climate warm by several degrees Celsius in the next century, unless some strong negative feedback mechanism emerges elsewhere in Earth's climate system," Dessler said.

Originally designed to observe atmospheric temperature and water vapor, AIRS data are already responsible for the greatest improvement to five to six-day weather forecasts than any other single instrument, said Chahine. JPL scientists have shown a major consequence of global warming will be an increase in the frequency and strength of severe storms. Earlier this year, a team of NASA researchers showed how AIRS can significantly improve tropical cyclone forecasting. The researchers studied deadly Typhoon Nargis in Burma (Myanmar) in May 2008. They found the uncertainty in the cyclone's landfall position could have been reduced by a factor of six had more sophisticated AIRS temperature data been used in the forecasts.

AIRS observes and records the global daily distribution of temperature, water vapor, clouds and several atmospheric gases including ozone, methane and carbon monoxide. With the addition of the mid-tropospheric carbon dioxide data set this week, a seven-year digital record is now complete for use by the scientific community and the public.

For more on AIRS, see http://airs.jpl.nasa.gov/ .
› All related images and animations