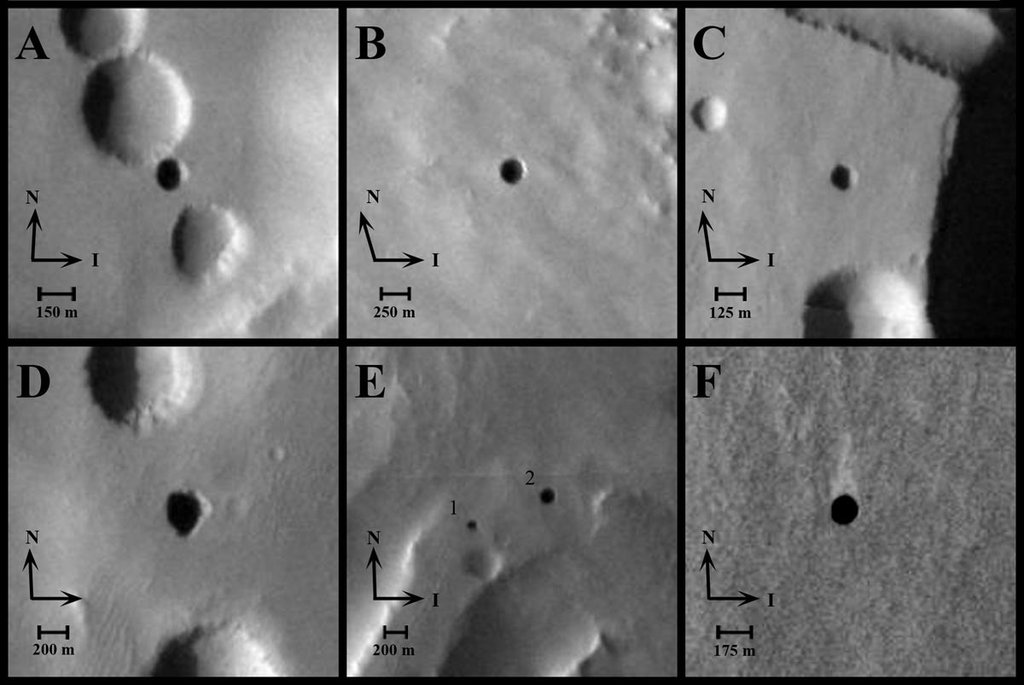 One of the three images in this set covers the same patch of Martian ground, centered on a possible cave skylight informally called "Annie," which has a diameter about double the length of a football field.+ Full image and caption
Credit: NASA/JPL-Caltech/ASU/USGS

PASADENA, Calif. -- NASA's Mars Odyssey spacecraft has discovered entrances to seven possible caves on the slopes of a Martian volcano. The find is fueling interest in potential underground habitats and sparking searches for caverns elsewhere on the Red Planet.

Very dark, nearly circular features ranging in diameter from about 100 to 250 meters (328 to 820 feet) puzzled researchers who found them in images taken by NASA's Mars Odyssey and Mars Global Surveyor orbiters. Using Mars Odyssey's infrared camera to check the daytime and nighttime temperatures of the circles, scientists concluded that they could be windows into underground spaces.

Evidence that the holes may be openings to cavernous spaces comes from the temperature differences detected from infrared images taken in the afternoon and in the pre-dawn morning. From day to night, temperatures of the holes change only about one-third as much as the change in temperature of surrounding ground surface.

"They are cooler than the surrounding surface in the day and warmer at night," said Glen Cushing of the U.S. Geological Survey's Astrogeology Team and of Northern Arizona University, Flagstaff, Ariz. "Their thermal behavior is not as steady as large caves on Earth that often maintain a fairly constant temperature, but it is consistent with these being deep holes in the ground."

A report of the discovery of the possible cave skylights by Cushing and his co-authors was published online recently by the journal Geophysical Research Letters.

"Whether these are just deep vertical shafts or openings into spacious caverns, they are entries to the subsurface of Mars," said co-author Tim Titus of the U.S. Geological Survey in Flagstaff. "Somewhere on Mars, caves might provide a protected niche for past or current life, or shelter for humans in the future."

The discovered holes, dubbed "Seven Sisters," are at some of the highest altitudes on the planet, on a volcano named Arsia Mons near Mars' tallest mountain.

"These are at such extreme altitude, they are poor candidates either for use as human habitation or for having microbial life," Cushing said. "Even if life has ever existed on Mars, it may not have migrated to this height."

The new report proposes that the deep holes on Arsia Mons probably formed as underground stresses around the volcano caused spreading and faults that opened spaces beneath the surface. Some of the holes are in line with strings of bowl-shaped pits where surface material has apparently collapsed to fill the gap created by a linear fault.

The observations have prompted researchers using Mars Odyssey and NASA's newer Mars Reconnaissance Orbiter to examine the Seven Sisters. The goal is to find other openings to underground spaces at lower elevations that are more accessible to future missions to Mars.

"The key to finding these was looking for temperature anomalies at night -- warm spots," said Phil Christensen of Arizona State University, Tempe, principal investigator for the Thermal Emission Imaging System on Mars Odyssey. That instrument produced both visible-light and infrared images researchers used for examining the possible caves.

"No other instrument at Mars could give the thermal information crucial to this research," said the project scientist for Mars Odyssey, Jeffrey Plaut of NASA's Jet Propulsion Laboratory, Pasadena, Calif. "This is a great example of the exciting discoveries Odyssey continues to make." Mars Odyssey reached Mars in 2001, years before any of the other spacecraft currently examining the planet. Its predecessor, Mars Global Surveyor, ended its mission last year.

Mars Odyssey is managed by JPL, a division of the California Institute of Technology, Pasadena, for NASA's Science Mission Directorate, Washington. Lockheed Martin Space Systems, Denver, is the prime contractor for the project and built the spacecraft. The orbiter's Thermal Emission Imaging System was developed by Arizona State University, Tempe, in collaboration with Raytheon Santa Barbara Remote Sensing, Santa Barbara, Calif., and is operated by Arizona State University. For additional information about Mars Odyssey and the new findings, visit: http://www.nasa.gov/mission_pages/odyssey.
Odyssey home page