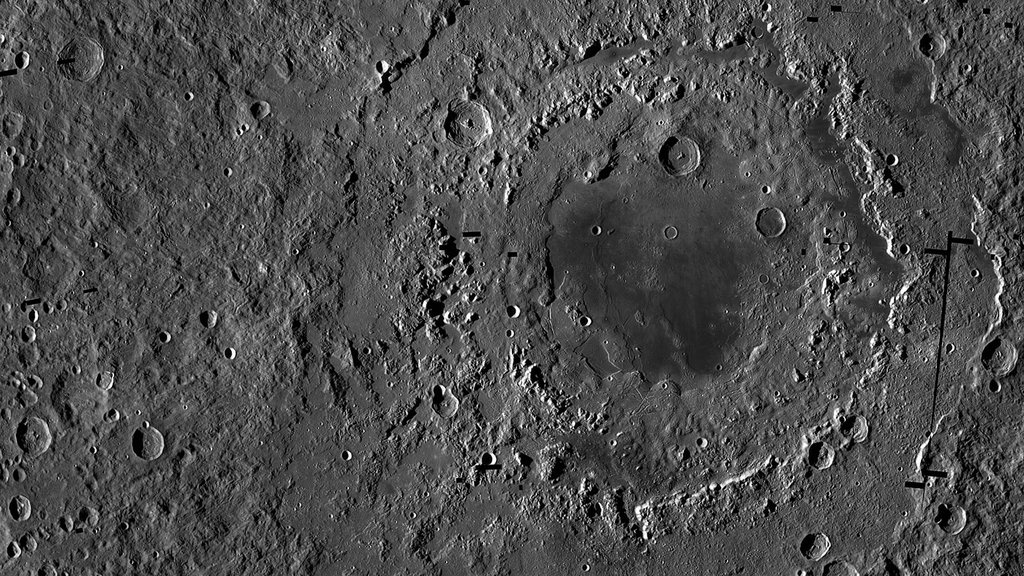 Orientale basin is about 580 miles (930 kilometers) wide and has three distinct rings, which form a bullseye-like pattern. This view is a mosaic of images from NASA's Lunar Reconnaissance Orbiter.
Credit: NASA/GSFC/Arizona State University 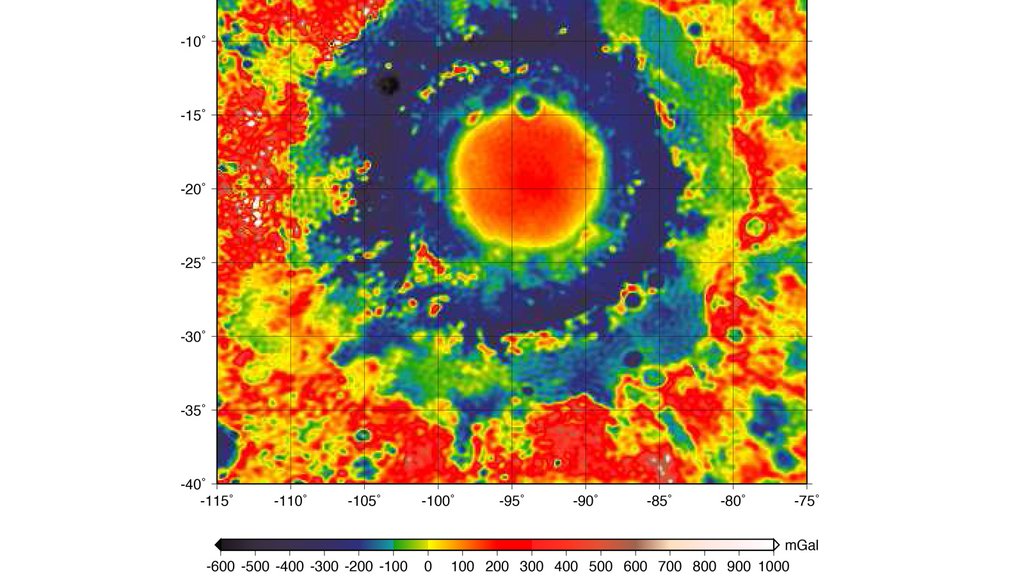 This color-coded map shows the strength of surface gravity around Orientale basin on the moon, derived from GRAIL data. (The color scale represents units of "gals" -- 1 gal is about 1/1000 of Earth's surface gravitational acceleration.)› Full image and caption
Credit: NASA/JPL-Caltech

New results from NASA's GRAIL mission yield insights into the huge impacts that dominated the early history of Earth's moon and other solid worlds in our solar system.

› Orientale basin is a giant, ringed impact crater on Earth's moon.
› Until now, how impact craters with rings form had not been well understood.
› Scientists have reconstructed Orientale's formation using data from NASA's GRAIL mission.

New results from NASA's Gravity Recovery and Interior Laboratory (GRAIL) mission are providing insights into the huge impacts that dominated the early history of Earth's moon and other solid worlds, like Earth, Mars, and the satellites of the outer solar system.

In two papers, published this week in the journal Science, researchers examine the origins of the moon's giant Orientale impact basin. The research helps clarify how the formation of Orientale, approximately 3.8 billion years ago, affected the moon's geology.

Located along the moon's southwestern limb -- the left-hand edge as seen from Earth -- Orientale is the largest and best-preserved example of what's known as a "multi-ring basin." Impact craters larger than about 180 miles (300 kilometers) in diameter are referred to as basins. With increasing size, craters tend to have increasingly complex structures, often with multiple concentric, raised rings. Orientale is about 580 miles (930 kilometers) wide and has three distinct rings, which form a bullseye-like pattern.

Multi-ring basins are observed on many of the rocky and icy worlds in our solar system, but until now scientists had not been able to agree on how their rings form. What they needed was more information about the crater's structure beneath the surface, which is precisely the sort of information contained in gravity science data collected during the GRAIL mission.

The powerful impacts that created basins like Orientale played an important role in the early geologic history of our moon. They were extremely disruptive, world-altering events that caused substantial fracturing, melting and shaking of the young moon's crust. They also blasted out material that fell back to the surface, coating older features that were already there; scientists use this layering of ejected material to help determine the age of lunar features as they work to unravel the moon's complex history.

The Importance of Orientale

Because scientists realized that Orientale could be quite useful in understanding giant impacts, they gave special importance to observing its structure near the end of the GRAIL mission. The orbit of the mission's two probes was lowered so they passed less than 1.2 miles (2 kilometers) above the crater's mountainous rings.

"No other planetary exploration mission has made gravity science observations this close to the moon. You could have waved to the twin spacecraft as they flew overhead if you stood at the ring's edge," said Sami Asmar, GRAIL project scientist at NASA's Jet Propulsion Laboratory, Pasadena, California.

In the first of the two new studies, scientists teased out the size of the transient crater from GRAIL's gravity field data. Their analysis shows that the initial crater was somewhere between the size of the basin's two innermost rings.

"We've been able to show that none of the rings in Orientale basin represent the initial, transient crater," said GRAIL Principal Investigator Maria Zuber of the Massachusetts Institute of Technology in Cambridge, lead author of the first paper. "Instead, it appears that, in large impacts like the one that formed Orientale, the surface violently rebounds, obliterating signs of the initial impact."

The analysis also shows that the impact excavated at least 816,000 cubic miles (3.4 million cubic kilometers) of material -- 153 times the combined volume of the Great Lakes.

"Orientale has been an enigma since the first gravity observations of the moon, decades ago," said Greg Neumann, a co-author of the paper at NASA's Goddard Space Flight Center in Greenbelt, Maryland. "We are now able to resolve the individual crustal components of the bullseye gravity signature and correlate them with computer simulations of the formation of Orientale."

The second study describes how scientists successfully simulated the formation of Orientale to reproduce the crater's structure as observed by GRAIL. These simulations show, for the first time, how the rings of Orientale formed, which is likely similar for multi-ring basins in general.

"Because our models show how the subsurface structure is formed, matching what GRAIL has observed, we're confident we've gained understanding of the formation of the basin close to 4 billion years ago," said Brandon Johnson of Brown University, Providence, Rhode Island, lead author of the second paper.

The results also shed light on another moon mystery: Giant impacts like Orientale should have dredged up deep material from the moon's mantle, but instead, the composition of the crater's surface is the same as that of the lunar crust. So, scientists have wondered, where did the mantle material go?

The simulation shows that the deep, initial crater quickly collapses, causing material around the outside to flow inward, and covering up the exposed mantle rock.

The new GRAIL insights about Orientale suggest that other ringed basins, invisible in images, could be discovered by their gravity signature. This may include ringed basins hidden beneath lunar maria -- the large, dark areas of solidified lava that include the Sea of Tranquility and the Sea of Serenity.

"The data set we obtained with GRAIL is incredibly rich," said Zuber. "There are many hidden wonders on the moon that we'll be uncovering for years to come."

The twin GRAIL probes were launched in 2011. The mission concluded in 2012.

The GRAIL mission was managed by NASA's Jet Propulsion Laboratory in Pasadena, California, for NASA's Science Mission Directorate in Washington. The mission was part of the Discovery Program managed at NASA's Marshall Space Flight Center in Huntsville, Alabama. GRAIL was built by Lockheed Martin Space Systems in Denver.