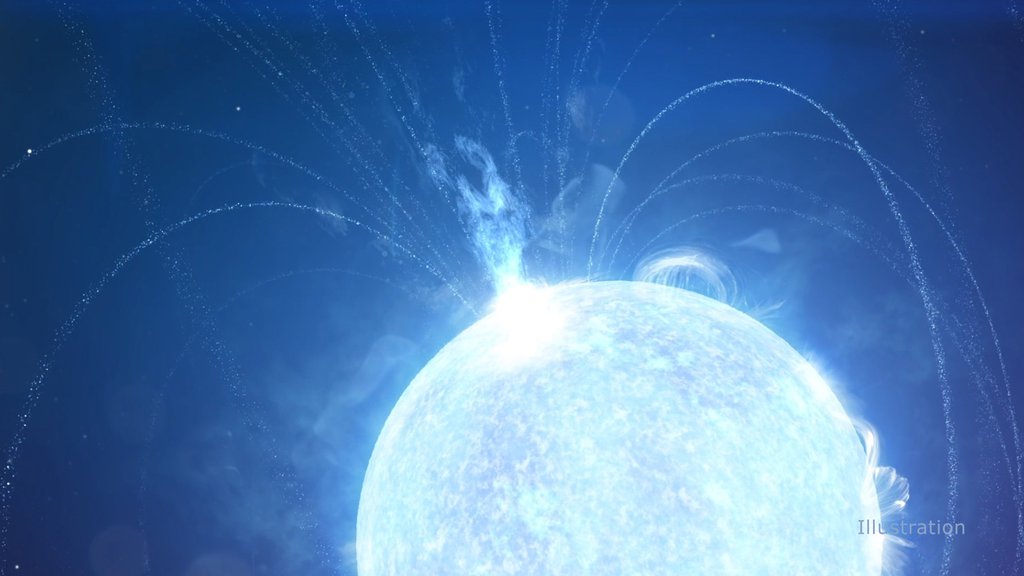 A powerful X-ray burst erupts from a magnetar - a supermagnetized version of a stellar remnant known as a neutron star - in this illustration. A radio burst detected April 28 occurred during a flare-up like this on a magnetar called SGR 1935.
Credit: NASA's Goddard Space Flight Center/Chris Smith (USRA) 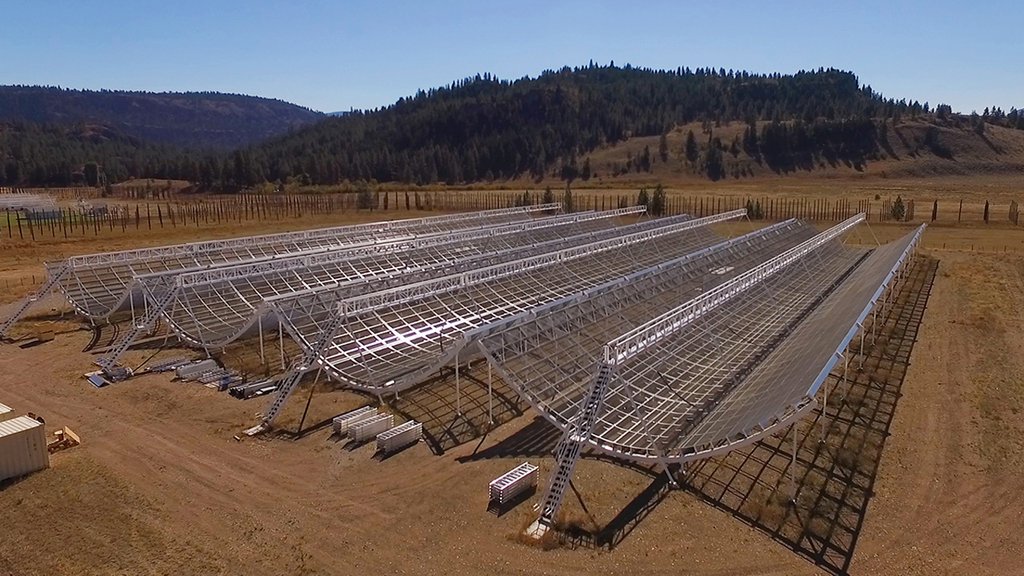 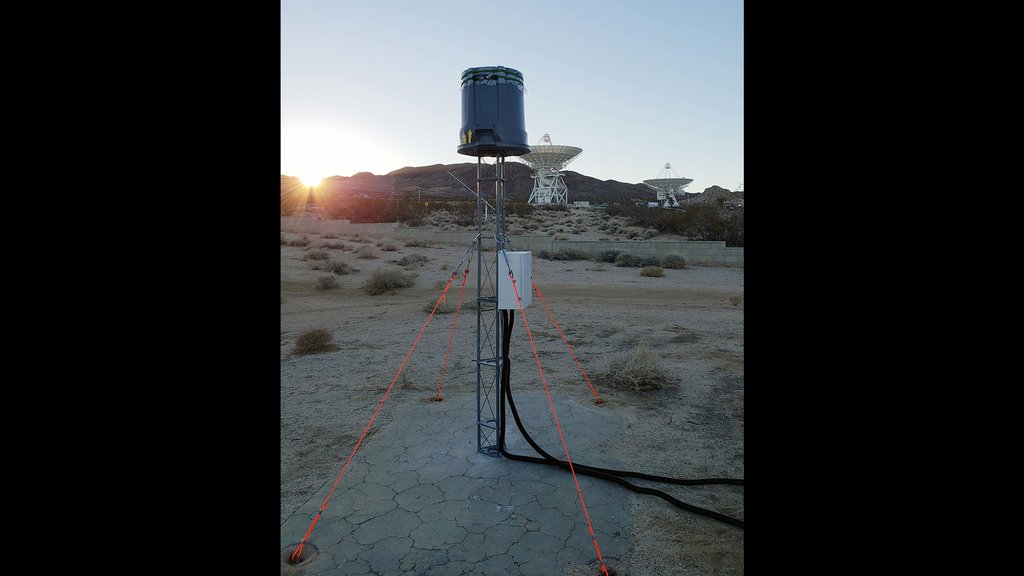 One of three radio detectors that make up the Survey for Transient Astronomical Radio Emission 2 (STARE2) array is shown here at the Goldstone Deep Space Communications Complex in California's Mojave Desert. The other detectors are in Big Pine, California, and Delta, Utah.
Credit: NASA

This is the first time one of these mysterious, repeating radio burst has been identified in our own galaxy, and the first identification of an object that caused one.

On April 28, a supermagnetized stellar remnant known as a magnetar blasted out a simultaneous mix of X-ray and radio signals never observed before. The flare-up included the first fast radio burst (FRB) ever seen from within our Milky Way galaxy and shows that magnetars can produce these mysterious and powerful radio blasts previously only seen in other galaxies.

"Before this event, a wide variety of scenarios could explain the origin of FRBs," said Chris Bochenek, a doctoral student in astrophysics at Caltech who led one study of the radio event. "While there may still be exciting twists in the story of FRBs in the future, for me, right now, I think it's fair to say that most FRBs come from magnetars until proven otherwise."

On April 28, space- and ground-based observatories detected powerful, simultaneous X-ray and radio bursts from a source in our galaxy. Watch to see how this unique event helps solve the long-standing puzzle of fast radio bursts observed in other galaxies.

A magnetar is a type of isolated neutron star, the crushed, city-size remains of a star many times more massive than our Sun. What makes a magnetar so special is its intense magnetic field. The field can be 10 trillion times stronger than a refrigerator magnet's and up to a thousand times stronger than a typical neutron star's. This represents an enormous storehouse of energy that astronomers suspect powers magnetar outbursts.

The X-ray portion of the synchronous bursts was detected by several satellites, including NASA's Wind mission.

A NASA-funded project called Survey for Transient Astronomical Radio Emission 2 (STARE2) also detected the radio burst seen by CHIME. Consisting of a trio of detectors in California and Utah and operated by Caltech and NASA's Jet Propulsion Laboratory in Southern California, STARE 2 is led by Bochenek, Shri Kulkarni at Caltech, and Konstantin Belov at JPL. They determined the burst's energy was comparable to FRBs.

By the time these bursts occurred, astronomers had already been monitoring their source for more than half a day.

Late on April 27, NASA's Neil Gehrels Swift Observatory spotted a new round of activity from a magnetar called SGR 1935+2154 (SGR 1935 for short) located in the constellation Vulpecula. It was the object's most prolific flare-up yet - a storm of rapid-fire X-ray bursts, each lasting less than a second. The storm, which raged for hours, was picked up at various times by Swift, NASA's Fermi Gamma-ray Space Telescope, and NASA's Neutron star Interior Composition Explorer (NICER), an X-ray telescope mounted on the International Space Station.

About 13 hours after the storm subsided, when the magnetar was out of view for Swift, Fermi and NICER, one special X-ray burst erupted. The blast was seen by the European Space Agency's INTEGRAL mission, the China National Space Administration's Huiyan X-ray satellite, and the Russian Konus instrument on Wind. As the half-second-long X-ray burst flared, CHIME and STARE2 detected the radio burst, which lasted only a thousandth of a second.

"The radio burst was far brighter than anything we had seen before, so we immediately knew it was an exciting event," said Paul Scholz, a researcher at the University of Toronto's Dunlap Institute for Astronomy & Astrophysics and a member of the CHIME/FRB Collaboration. "We've studied magnetars in our galaxy for decades, while FRBs are an extragalactic phenomenon whose origins have been a mystery. This event shows that the two phenomena are likely connected."

Papers from both the CHIME/FRB Collaboration and the STARE2 team were published on Nov. 4 in the journal Nature.

SGR 1935's distance remains poorly established, with estimates ranging from 14,000 to 41,000 light-years. Assuming it lies at the nearer end of this range, the X-ray portion of the simultaneous bursts carried as much energy as our Sun produces over a month. Intriguingly, however, it was not as powerful as some of the flares in the magnetar's storm eruption.

"The bursts seen by NICER and Fermi during the storm are clearly different in their spectral characteristics from the one associated with the radio blast," said George Younes, a researcher at George Washington University in Washington and the lead author of two papers analyzing the burst storm that are now undergoing peer review. "We attribute this difference to the location of the X-ray flare on the star's surface, with the FRB-associated burst likely occurring at or close to the magnetic pole. This may be key to understanding the origin of the exceptional radio signal."

SGR 1935's radio burst was thousands of times brighter than any radio emissions from magnetars in our galaxy. If this event had occurred in another galaxy, it would have been indistinguishable from some of the weaker FRBs observed.

In addition, the radio pulse arrived during an X-ray burst, something that has never before been seen in association with FRBs. Taken together, the observations strongly suggest that SGR 1935 produced the Milky Way's equivalent of an FRB, which means magnetars in other galaxies likely produce at least some of these signals.

For ironclad proof of the magnetar connection, researchers ideally would like to find an FRB outside of our galaxy that coincides with an X-ray burst from the same source. This combination may only be possible for nearby galaxies, which is why CHIME, STARE2 and NASA's high-energy satellites will keep watching the skies.