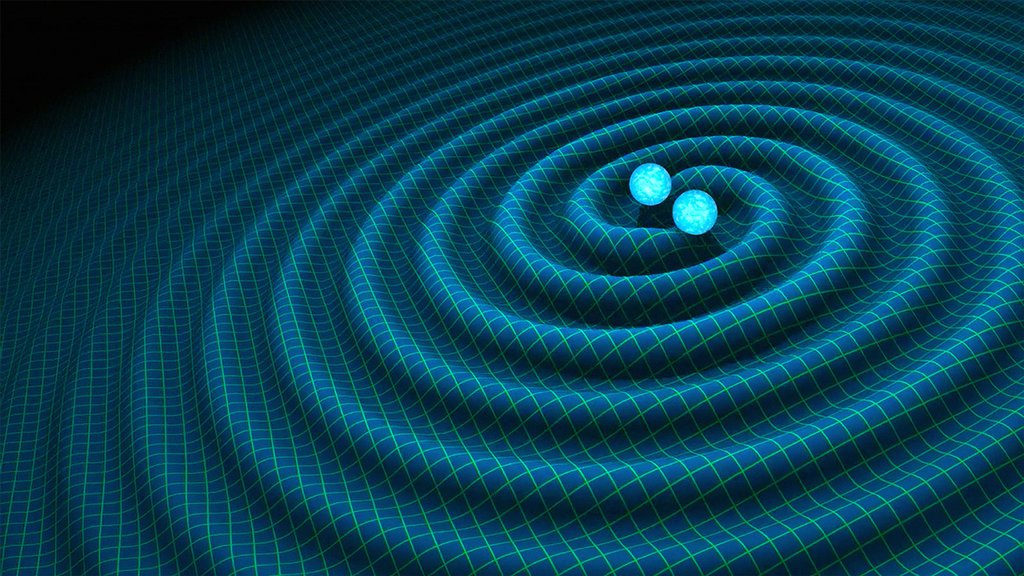 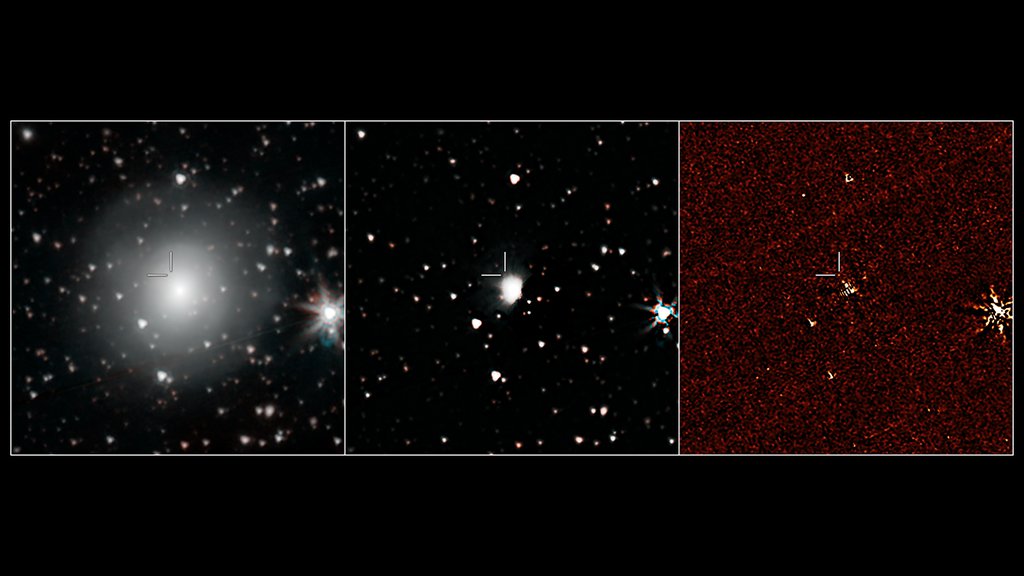 NASA's Spitzer Space Telescope has provisionally detected the faint afterglow of the explosive merger of two neutron stars in the galaxy NGC 4993. The event, labeled GW170817, was initially detected in gravitational waves and gamma rays. Subsequent observations by dozens of telescopes have monitored its afterglow across the entire spectrum of light. The event is located about 130 million light-years from Earth. › Full image and caption

Swift's Ultraviolet/Optical Telescope imaged the kilonova produced by merging neutron stars in the galaxy NGC 4993 (box) on Aug. 18, 2017, about 15 hours after gravitational waves and the gamma-ray burst were detected. The source was unexpectedly bright in ultraviolet light. It faded rapidly and was undetectable in UV when Swift looked again on Aug. 29. This false-color composite combines images taken through three ultraviolet filters. Inset: Magnified views of the galaxy. Credits: NASA/Swift

The kilonova associated with GW170817 (box) was observed by NASA's Hubble Space Telescope and Chandra X-ray Observatory. Hubble detected optical and infrared light from the hot expanding debris. The merging neutron stars produced gravitational waves and launched jets that produced a gamma-ray burst. Nine days later, Chandra detected the X-ray afterglow emitted by the jet directed toward Earth after it had spread into our line of sight. Credits: NASA/CXC/E. Troja

On August 17, 2017, the Laser Interferometer Gravitational-wave Observatory detected gravitational waves from a neutron star collision. Within 12 hours, observatories had identified the source of the event within the galaxy NGC 4993, shown in this Hubble Space Telescope image, and located an associated stellar flare called a kilonova (box). Inset: Hubble observed the kilonova fade over the course of six days. Credits: NASA and ESA

For the first time, NASA scientists have detected light tied to a gravitational-wave event.

For the first time, NASA scientists have detected light tied to a gravitational-wave event, thanks to two merging neutron stars in the galaxy NGC 4993, located about 130 million light-years from Earth in the constellation Hydra.

Shortly after 5:41 a.m. PDT (8:41 a.m. EDT) on Aug. 17, NASA's Fermi Gamma-ray Space Telescope picked up a pulse of high-energy light from a powerful explosion, which was immediately reported to astronomers around the globe as a short gamma-ray burst. The scientists at the National Science Foundation's Laser Interferometer Gravitational-wave Observatory (LIGO) detected gravitational waves dubbed GW170817 from a pair of smashing stars tied to the gamma-ray burst, encouraging astronomers to look for the aftermath of the explosion. Shortly thereafter, the burst was detected as part of a follow-up analysis by ESA's (European Space Agency's) INTEGRAL satellite.

NASA's Swift, Hubble, Chandra and Spitzer missions, along with dozens of ground-based observatories, including the NASA-funded Pan-STARRS survey, later captured the fading glow of the blast's expanding debris.

"This is extremely exciting science," said Paul Hertz, director of NASA's Astrophysics Division at the agency's headquarters in Washington. "Now, for the first time, we've seen light and gravitational waves produced by the same event. The detection of a gravitational-wave source's light has revealed details of the event that cannot be determined from gravitational waves alone. The multiplier effect of study with many observatories is incredible."

Neutron stars are the crushed, leftover cores of massive stars that previously exploded as supernovas long ago. The merging stars likely had masses between 10 and 60 percent greater than that of our Sun, but they were no wider than Washington, D.C. The pair whirled around each other hundreds of times a second, producing gravitational waves at the same frequency. As they drew closer and orbited faster, the stars eventually broke apart and merged, producing both a gamma-ray burst and a rarely seen flare-up called a "kilonova."

"This is the one we've all been waiting for," said David Reitze, executive director of the LIGO Laboratory at Caltech in Pasadena, California. "Neutron star mergers produce a wide variety of light because the objects form a maelstrom of hot debris when they collide. Merging black holes -- the types of events LIGO and its European counterpart, Virgo, have previously seen -- very likely consume any matter around them long before they crash, so we don't expect the same kind of light show."

"The favored explanation for short gamma-ray bursts is that they're caused by a jet of debris moving near the speed of light produced in the merger of neutron stars or a neutron star and a black hole," said Eric Burns, a member of Fermi's Gamma-ray Burst Monitor team at NASA's Goddard Space Flight Center in Greenbelt, Maryland. "LIGO tells us there was a merger of compact objects, and Fermi tells us there was a short gamma-ray burst. Together, we know that what we observed was the merging of two neutron stars, dramatically confirming the relationship."

Within hours of the initial Fermi detection, LIGO and the Virgo detector at the European Gravitational Observatory near Pisa, Italy, greatly refined the event's position in the sky with additional analysis of gravitational wave data. Ground-based observatories then quickly located a new optical and infrared source -- the kilonova -- in NGC 4993.

To Fermi, this appeared to be a typical short gamma-ray burst, but it occurred less than one-tenth as far away as any other short burst with a known distance, making it among the faintest known. Astronomers are still trying to figure out why this burst is so odd, and how this event relates to the more luminous gamma-ray bursts seen at much greater distances.

NASA's Swift, Hubble and Spitzer missions followed the evolution of the kilonova to better understand the composition of this slower-moving material, while Chandra searched for X-rays associated with the remains of the ultra-fast jet.

When Swift turned to the galaxy shortly after Fermi's gamma-ray burst detection, it found a bright and quickly fading ultraviolet (UV) source.

"We did not expect a kilonova to produce bright UV emission," said Goddard's S. Bradley Cenko, principal investigator for Swift. "We think this was produced by the short-lived disk of debris that powered the gamma-ray burst."

Over time, material hurled out by the jet slows and widens as it sweeps up and heats interstellar material, producing so-called afterglow emission that includes X-rays.

But the spacecraft saw no X-rays -- a surprise for an event that produced higher-energy gamma rays.

NASA's Chandra X-ray Observatory clearly detected X-rays nine days after the source was discovered. Scientists think the delay was a result of our viewing angle, and it took time for the jet directed toward Earth to expand into our line of sight.

"The detection of X-rays demonstrates that neutron star mergers can form powerful jets streaming out at near light speed," said Goddard's Eleonora Troja, who led one of the Chandra teams and found the X-ray emission.We had to wait for nine days to detect it because we viewed it from the side, unlike anything we had seen before."

On Aug. 22, NASA's Hubble Space Telescope began imaging the kilonova and capturing its near-infrared spectrum, which revealed the motion and chemical composition of the expanding debris.

"The spectrum looked exactly like how theoretical physicists had predicted the outcome of the merger of two neutron stars would appear," said Andrew Levan at the University of Warwick in Coventry, England, who led one of the proposals for Hubble spectral observations. "It tied this object to the gravitational wave source beyond all reasonable doubt."

Astronomers think a kilonova's visible and infrared light primarily arises through heating from the decay of radioactive elements formed in the neutron-rich debris. Crashing neutron stars may be the universe's dominant source for many of the heaviest elements, including platinum and gold.

Because of its Earth-trailing orbit, Spitzer was uniquely situated to observe the kilonova long after the Sun moved too close to the galaxy for other telescopes to see it. Spitzer's Sept. 30 observation captured the longest-wavelength infrared light from the kilonova, which unveils the quantity of heavy elements forged.

"Spitzer was the last to join the party, but it will have the final word on how much gold was forged," says Mansi Kasliwal, Caltech assistant professor and principal investigator of the Spitzer observing program.

Numerous scientific papers describing and interpreting these observations have been published in Science, Nature, Physical Review Letters and The Astrophysical Journal.

Gravitational waves were directly detected for the first time in 2015 by LIGO, whose architects were awarded the 2017 Nobel Prize in physics for the discovery.