NASA Mission Will Study the Cosmos With a Stratospheric Balloon 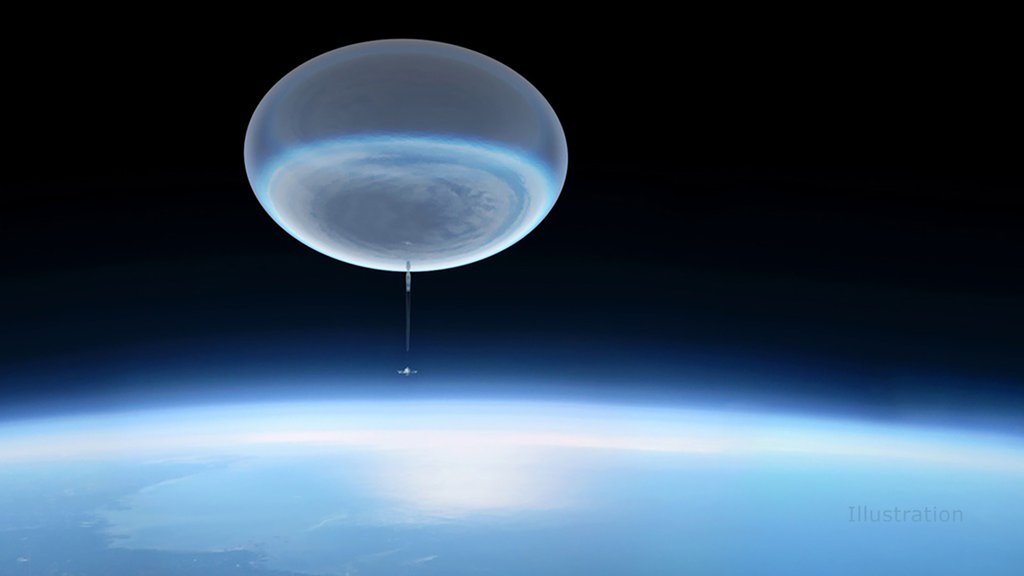 This illustration shows a high-altitude balloon ascending into the upper atmosphere. When fully inflated, these balloons are 400 feet (150 meters) wide, or about the size of a football stadium, and reach an altitude of 130,000 feet (24.6 miles or 40 kilometers).
Credit: NASA's Goddard Space Flight Center Conceptual Image Lab/Michael Lentz

Carried by a balloon the size of a football stadium, ASTHROS will use a cutting-edge telescope to observe wavelengths of light that aren't visible from the ground.

Work has begun on an ambitious new mission that will carry a cutting-edge 8.4-foot (2.5-meter) telescope high into the stratosphere on a balloon. Tentatively planned to launch in December 2023 from Antarctica, ASTHROS (short for Astrophysics Stratospheric Telescope for High Spectral Resolution Observations at Submillimeter-wavelengths) will spend about three weeks drifting on air currents above the icy southern continent and achieve several firsts along the way.

Managed by NASA's Jet Propulsion Laboratory, ASTHROS observes far-infrared light, or light with wavelengths much longer than what is visible to the human eye. To do that, ASTHROS will need to reach an altitude of about 130,000 feet (24.6 miles, or 40 kilometers) - roughly four times higher than commercial airliners fly. Though still well below the boundary of space (about 62 miles, or 100 kilometers, above Earth's surface), it will be high enough to observe light wavelengths blocked by Earth's atmosphere.

The mission team recently put the finishing touches on the design for the observatory's payload, which includes its telescope (which captures the light), its science instrument, and such subsystems as the cooling and electronic systems. In early August, engineers at JPL will begin integration and testing of those subsystems to verify that they perform as expected.

While balloons might seem like antiquated technology, they offer NASA unique advantages over ground- or space-based missions. NASA's Scientific Balloon Program has been operating for 30 years at Wallops Flight Facility in Virginia. It launches 10 to 15 missions a year from locations around the globe in support of experiments across all of NASA's science disciplines, as well as for technology development and education purposes. Balloon missions don't only have lower costs compared to space missions, they also have shorter times between early planning and deployment, which means they can accept the higher risks associated with using new or state-of-the-art technologies that haven't yet flown in space. These risks may come in the form of unknown technical or operational challenges that can impact a mission's science output. By working through these challenges, balloon missions can set the stage for future missions to reap the benefits of these new technologies.

"Balloon missions like ASTHROS are higher-risk than space missions but yield high-rewards at modest cost," said JPL engineer Jose Siles, project manager for ASTHROS. "With ASTHROS, we're aiming to do astrophysics observations that have never been attempted before. The mission will pave the way for future space missions by testing new technologies and providing training for the next generation of engineers and scientists."

Infrared Eyes in the Sky

ASTHROS will carry an instrument to measure the motion and speed of gas around newly-formed stars. During flight, the mission will study four main targets, including two star-forming regions in the Milky Way galaxy. It will also for the first time detect and map the presence of two specific types of nitrogen ions (atoms that have lost some electrons). These nitrogen ions can reveal places where winds from massive stars and supernova explosions have reshaped the gas clouds within these star-forming regions.

In a process known as stellar feedback, such violent outbursts can, over millions of years, disperse the surrounding material and impede star formation or halt it altogether. But stellar feedback can also cause material to clump together, accelerating star formation. Without this process, all the available gas and dust in galaxies like our own would have coalesced into stars long ago.

ASTHROS will make the first detailed 3D maps of the density, speed, and motion of gas in these regions to see how the newborn giants influence their placental material. By doing so, the team hopes to gain insight into how stellar feedback works and to provide new information to refine computer simulations of galaxy evolution.

The Carina Nebula, a star-forming region in the Milky Way galaxy, is among four science targets that scientists plan to observe with the ASTHROS high-altitude balloon mission. ASTHROS will study stellar feedback in this region, the process by which stars influence the formation of more stars in their environment. Image Credit: NASA, ESA, N. Smith (University of California, Berkeley) et al., the Hubble Heritage Team (STScI/AURA)
› Larger view

A third target for ASTHROS will be the galaxy Messier 83. Observing signs of stellar feedback there will enable the ASTHROS team to gain deeper insight into its effect on different types of galaxies. "I think it's understood that stellar feedback is the main regulator of star formation throughout the universe's history," said JPL scientist Jorge Pineda, principal investigator of ASTHROS. "Computer simulations of galaxy evolution still can't quite replicate the reality that we see out in the cosmos. The nitrogen mapping that we'll do with ASTHROS has never been done before, and it will be exciting to see how that information helps make those models more accurate."

Finally, as its fourth target, ASTHROS will observe TW Hydrae, a young star surrounded by a wide disk of dust and gas where planets may be forming. With its unique capabilities, ASTHROS will measure the total mass of this protoplanetary disk and show how this mass is distributed throughout. These observations could potentially reveal places where the dust is clumping together to form planets. Learning more about protoplanetary disks could help astronomers understand how different types of planets form in young solar systems.

To do all this, ASTHROS will need a big balloon: When fully inflated with helium, it will be about 400 feet (150 meters) wide, or about the size of a football stadium. A gondola beneath the balloon will carry the instrument and the lightweight telescope, which consists of an 8.4-foot (2.5-meter) dish antenna as well as a series of mirrors, lenses, and detectors designed and optimized to capture far-infrared light. Thanks to the dish, ASTHROS tied for the largest telescope to ever fly on a high-altitude balloon. During flight, scientists will be able to precisely control the direction that the telescope points and download the data in real-time using satellite links.

This time-lapse video shows the launch of the Stratospheric Terahertz Observatory II (STO-2), a NASA astrophysics mission, from Antarctica in 2016. Such high-altitude balloon missions provide the opportunity to observe wavelengths of light that are blocked by Earth's atmosphere. Credit: NASA/JPL-Caltech
› Larger view

Because far-infrared instruments need to be kept very cold, many missions carry liquid helium to cool them. ASTHROS will instead rely on a cryocooler, which uses electricity (supplied by ASTHROS' solar panels) to keep the superconducting detectors close to minus 451.3 degrees Fahrenheit (minus 268.5 degrees Celsius) - a little above absolute zero, the coldest temperature matter can reach. The cryocooler weighs much less than the large liquid helium container that ASTHROS would need to keep its instrument cold for the entire mission. That means the payload is considerably lighter and the mission's lifetime is no longer limited by how much liquid helium is on board.

The team expects the balloon will complete two or three loops around the South Pole in about 21 to 28 days, carried by prevailing stratospheric winds. Once the science mission is complete, operators will send flight termination commands that separate the gondola, which is connected to a parachute, from the balloon. The parachute returns the gondola to the ground so that the telescope can be recovered and refurbished to fly again.

"We will launch ASTHROS to the edge of space from the most remote and harsh part of our planet," said Siles. "If you stop to think about it, it's really challenging, which makes it so exciting at the same time."

A division of Caltech in Pasadena, JPL manages the ASTHROS mission for the Astrophysics Division of NASA's Science Mission Directorate. JPL is also building the mission payload. The Johns Hopkins Applied Physics Laboratory in Maryland is developing the gondola and pointing systems. The 2.5-meter antenna unit is being built by Media Lario S.r.l. in Lecco, Italy. The payload cryocooler was developed by Lockheed Martin under NASA's Advanced Cryocooler Technology Development Program. NASA's Scientific Balloon Program and its Columbia Science Balloon Facility will provide the balloon and launch services. ASTHROS is scheduled to launch from McMurdo Station in Antarctica, which is managed by the National Science Foundation through the U.S. Antarctic Program. Other key partners include Arizona State University and the University of Miami.