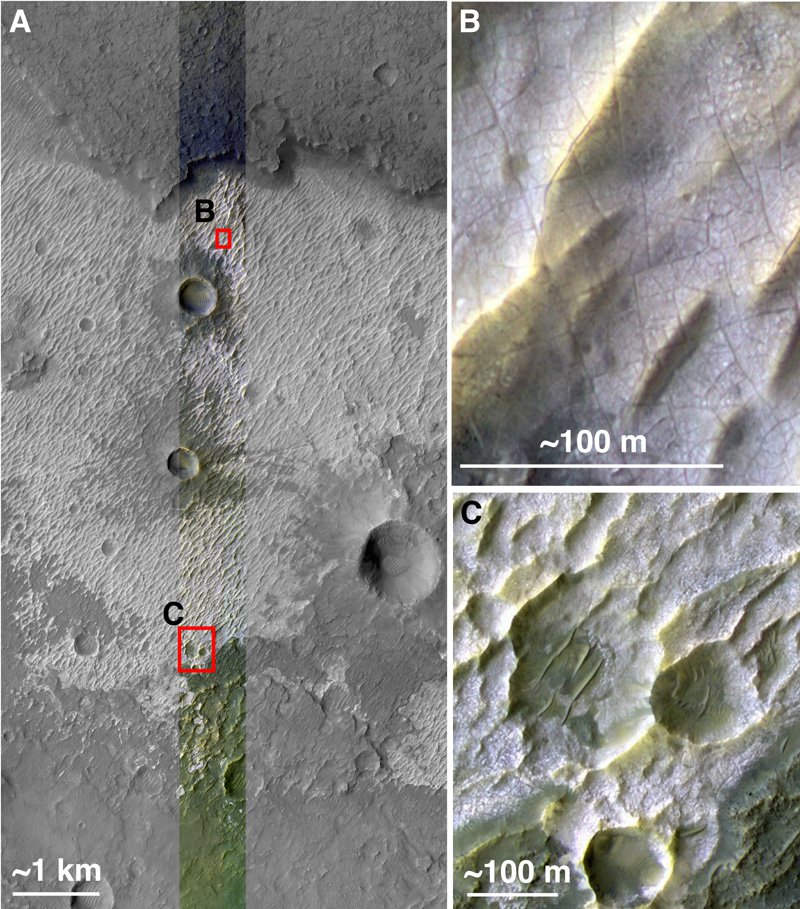 This image provides higher-resolution views of a site where another observation indicates the presence of chloride salt deposits.› Full image and caption
Credit: NASA/JPL-Caltech/University of Arizona/Arizona State University/University of Hawaii 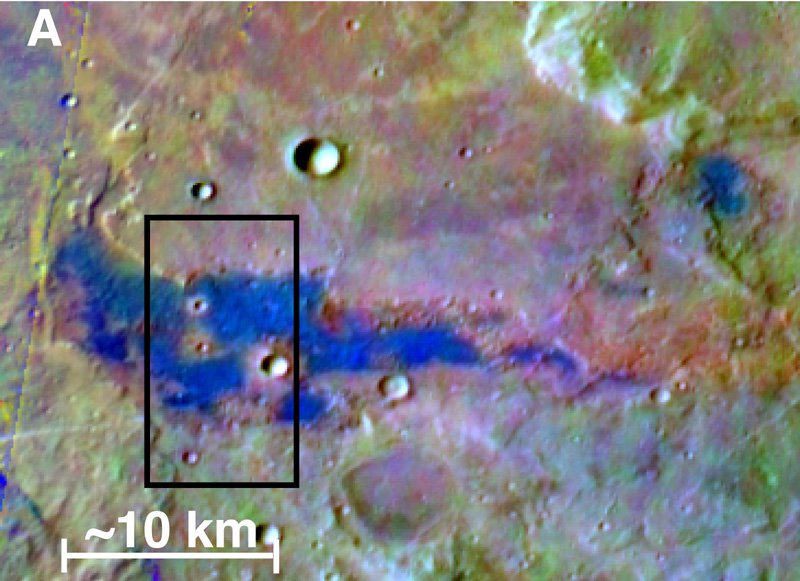 NASA's Mars Odyssey orbiter has found evidence of salt deposits. These deposits point to places where water once was abundant and where evidence might exist of possible Martian life from the Red Planet's past.

PASADENA , Calif. -NASA's Mars Odyssey orbiter has found evidence of salt deposits. These deposits point to places where water once was abundant and where evidence might exist of possible Martian life from the Red Planet's past.

A team led by Mikki Osterloo of the University of Hawaii, Honolulu, found approximately 200 places on southern Mars that show spectral characteristics consistent with chloride minerals. Chloride is part of many types of salt, such as sodium chloride or table salt. The sites range from about a square kilometer (0.4 square mile) to 25 times that size.

"They could come from groundwater reaching the surface in low spots," Osterloo said. "The water would evaporate and leave mineral deposits, which build up over years. The sites are disconnected, so they are unlikely to be the remnants of a global ocean."

Plotted on a Mars map, the chloride sites appear only in the southern highlands, the most ancient rocks on Mars. Osterloo and seven co-authors report the findings in this week's issue of the journal Science.

"Many of the deposits lie in basins with channels leading into them," said Philip Christensen, co-author and principal investigator for the camera at Arizona State University. "This is the kind of feature, like salt-pan deposits on Earth, that's consistent with water flowing in over a long time."

Scientists looking for evidence of past life on Mars have focused mainly on a handful of places that show evidence of clay or sulfate minerals. Clays indicate weathering by water, and sulfates may have formed by water evaporation. The new research, however, suggests an alternative mineral target to explore for biologi cal remains.

"By their nature, salt deposits point to a lot of water, which potentially could remain standing in pools as it evaporates," said Christensen. "That's crucial. For life, it's all about a habitat that endures for some time."

Whether life ever has existed on Mars is the biggest scientific question driving Mars research. On Earth, salt is good at preserving organic material. Bacteria have been revived in the laboratory after being preserved in salt deposits for millions of years.

"This is a wonderful and scientifically exciting result obtained from a relatively low cost NASA Mars orbiter mission which still has years of life left," said Alan Stern, associate administrator for NASA's Science Mission Directorate in Washington. "Hold on to your hats, more exciting results from Mars are sure to be coming."

JPL, a division of the California Institute of Technology, Pasadena, manages Odyssey for the NASA Science Mission Directorate. Lockheed Martin Space Systems, Denver, is the prime contractor for the project and built the spacecraft. Additional information about Odyssey is at http://www.nasa.gov/mission_pages/odyssey . More information about the camera and the new findings is at http://themis.asu.edu .