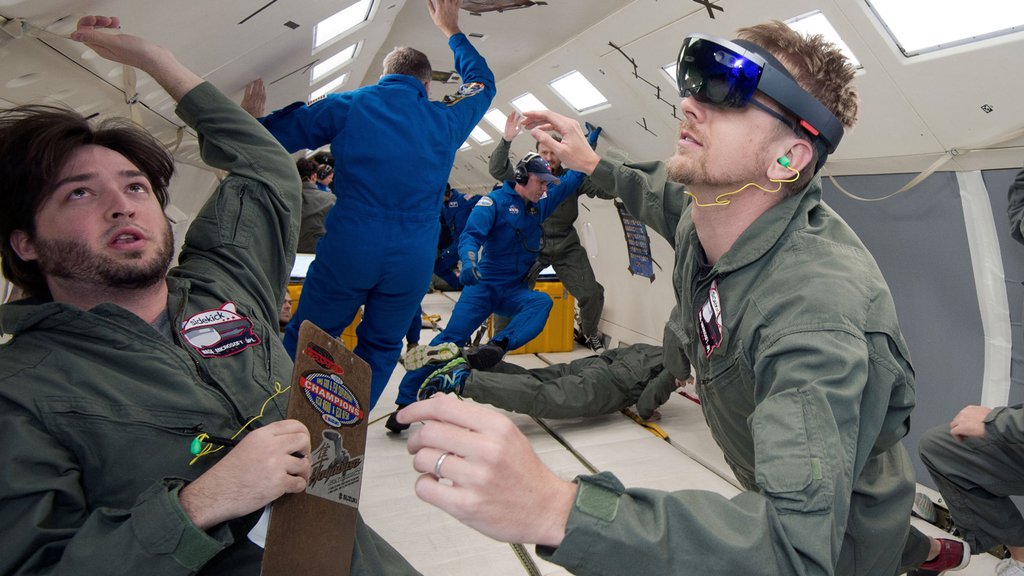 NASA and Microsoft are teaming up to develop Sidekick, a new project using commercial technology to empower astronauts aboard the International Space Station (ISS).

Update: The Hololens device launched to the International Space Station on December 6, 2015

NASA and Microsoft are teaming up to develop Sidekick, a new project using commercial technology to empower astronauts aboard the International Space Station (ISS).

Sidekick uses Microsoft HoloLens to provide virtual aid to astronauts working off the Earth, for the Earth. A pair of the devices is scheduled to launch on SpaceX's seventh commercial resupply mission to the station on June 28.

"HoloLens and other virtual and mixed reality devices are cutting edge technologies that could help drive future exploration and provide new capabilities to the men and women conducting critical science on the International Space Station," said Sam Scimemi, director of the ISS program at NASA Headquarters in Washington. "This new technology could also empower future explorers requiring greater autonomy on the journey to Mars."

The goal of Sidekick is to enable station crews with assistance when and where they need it. This new capability could reduce crew training requirements and increase the efficiency at which astronauts can work in space.

"Microsoft HoloLens is about transforming the ways you create, connect, and explore," said Alex Kipman, technical fellow, Windows and Devices Group at Microsoft. "Sidekick is a prime example of an application for which we envisioned HoloLens being used - unlocking new potential for astronauts and giving us all a new perspective on what is possible with holographic computing."

NASA and Microsoft engineers tested Project Sidekick and the Microsoft HoloLens aboard NASA's Weightless Wonder C9 jet to ensure they function as expected in free-fall in advance of their delivery to the microgravity environment of the space station.

Sidekick has two modes of operation. The first is "Remote Expert Mode," which uses Skype, part of Microsoft, to allow a ground operator to see what a crew member sees, provide real-time guidance, and draw annotations into the crew member's environment to coach him or her through a task. Until now, crew members have relied on written and voice instructions when performing complex repair tasks or experiments.

The second mode is "Procedure Mode," which augments standalone procedures with animated holographic illustrations displayed on top of the objects with which the crew is interacting. This capability could lessen the amount of training that future crews will require and could be an invaluable resource for missions deep into our solar system, where communication delays complicate difficult operations.

After the devices arrive at the space station, crew members will test and verify the software and hardware functionality in a standalone mode. A second set of devices to be delivered on a future mission will test and verify Sidekick functionality with network connectivity to test the Remote Expert Mode. NASA expects astronauts on the station will first use Sidekick by the end of the year.

Sidekick also will be used and evaluated during the NASA Extreme Environment Mission Operations (NEEMO) 20 expedition set to begin July 21 when a group of astronauts and engineers live in the world's only undersea research station, Aquarius, for two weeks. The Aquarius habitat and its surroundings provide a convincing analog for space exploration.

The Sidekick project is part of a larger partnership formed by NASA and Microsoft to explore applications of holographic computing in space exploration. Earlier this year, NASA and Microsoft announced a collaboration to develop software called OnSight, a new technology that will enable scientists to work virtually on Mars using the same HoloLens technology. NASA's Jet Propulsion Laboratory (JPL) in Pasadena, California, led the development of Sidekick and OnSight. NASA's Johnson Space Center in Houston led testing and certification of Sidekick for use onboard the space station.

"Our team is excited to be building virtual and mixed reality tools that will make our explorers more efficient and effective," said Jeff Norris, project lead for Sidekick and OnSight at JPL.

The International Space Station is a convergence of science, technology and human innovation that enables us to demonstrate new technologies and make research breakthroughs not possible on Earth. It has been continuously occupied since November 2000 and, since then, has been visited by more than 200 people and a variety of international and commercial spacecraft. The space station remains the springboard to NASA's next giant leap in exploration, including future missions to an asteroid and Mars.

For more about the ISS, visit: