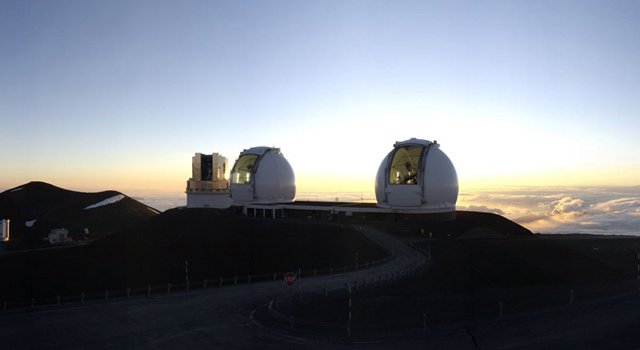 The Keck Interferometer, with the telescopes' doors open to equalize temperature inside and outside of the domes.
Credit: NASA/JPL

NASA has selected three teams of scientists to begin studying disks of dust around nearby stars starting in February 2008, using the Keck Interferometer in Mauna Kea, Hawaii.

NASA has selected three teams of scientists to begin studying disks of dust around nearby stars starting in February 2008, using the Keck Interferometer in Mauna Kea, Hawaii. This sophisticated new system combines the observing power of the two large Keck telescopes into a single mega-telescope.

The announcement follows completion of the Keck Interferometer's technology phase, in which its detectors, starlight trackers, active optics and computer control systems were installed, tested and integrated. Testing was conducted on stars, in the first on-sky demonstration of long-baseline nulling interferometry, a technique that "cancels" the bright light from the star to see fainter material around it.

The teams will study stars with known debris disks and look for signs of dust around other stars. Some debris disks are remnants from planet formation; others contain material kicked up when asteroids collide. Asteroid collisions in our solar system produce a disk of what's called "zodiacal dust." This can be seen when sunlight scatters small dust grains to produce a faint band of light visible against a dark sky just after sunset or before dawn. The Keck Interferometer science teams are looking for comparable, although much brighter, disks in other planetary systems.

More information on the Keck Interferometer is at http://planetquest.jpl.nasa.gov/Keck/keck_index.cfm. Click "Visualizations" for a virtual tour and animation.