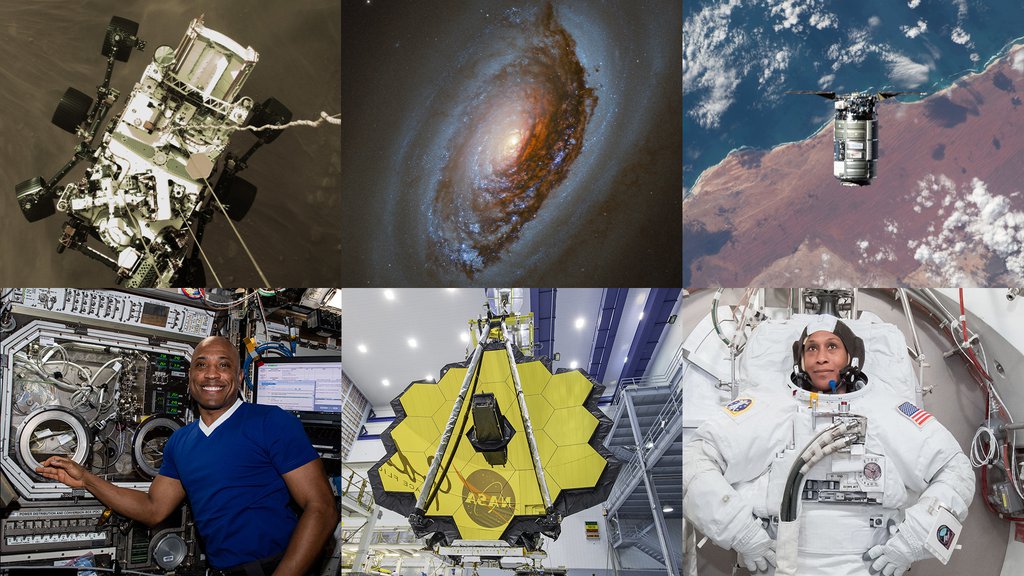 When NASA touches down at the virtual South by Southwest this year, with experts at the ready to discuss topics far and wide.

Attendees can catch agency experts – including astronauts, JPL Director Michael Watkins, and many more – sharing their insights about NASA’s missions and programs.

NASA returns to South by Southwest (SXSW) this year for a virtual viewing of the agency’s missions and programs during the online festival, which takes place March 9-11 for SXSWedu for educators and March 16-20 for SXSW Online.

Agency experts will participate in this year’s digital experience with featured sessions and informative panel discussions on topics ranging from space exploration to diversity and inclusion.

Attendees are welcome to share their NASA experience by tagging posts and photos with #NASASXSW.

A full list of panels with NASA participants is listed below:

The STEM Future Is Female 2.0 Leading and Empowering

Today’s students are the Artemis Generation and they will take space exploration farther than we’ve ever gone before. The Artemis program will send the first woman and next man to the Moon and build a sustainable presence to prepare for missions to Mars and beyond. Women leaders from NASA will discuss how the agency’s broad STEM outreach opportunities can be tailored to support girls in STEM to become the future women leading the way in STEM discoveries, policies, and careers.

Space Is for Everybody: Insights From NASA Astronauts

For 20 years, humans have conducted science from humanity’s home in orbit – the International Space Station. Join NASA astronauts Victor Glover and Kate Rubins for a SXSW keynote address from 250 miles (400 kilometers) above Earth as these space travelers provide insight about their experience working and living in space, international collaboration aboard the station, space technology, and how research in microgravity benefits everybody back on Earth.

NASA-JPL & the Search for Life in the Universe

In this featured session, go inside NASA’s Jet Propulsion Laboratory with center director Mike Watkins. JPL is a research facility managed for NASA by Caltech, and is home to the interstellar Voyager spacecraft, all successful Mars rovers, and mission control for deep space. You’ll go on a virtual trip inside mission control, off to Mars and an icy moon of Jupiter, and see current and future ways we might #SearchForLife beyond Earth.

Living on Mars, Beyond Surviving

In 2019, NASA concluded a competition that sought perspectives from outside the traditional aerospace industry to explore how a human habitat could be designed and delivered on Mars using autonomous 3D printing technologies. The competition’s goal was to advance construction technology needed to create sustainable habitation solutions for Mars and beyond.

This was an opportunity for designers and engineers to push the thinking on human-centric design with an approach that moves beyond the idea of astronauts as purely operators, to create habitats where people can not only survive, but also thrive.

This panel will bring together NASA, an architect, and an Antarctic doctor to discuss what is required to create spaces where people can live and explore the far reaches of space.

In 1849, James Marshall discovered gold at Sutter’s Mill, sparking a surge of gold-seekers in California and the rise of massive industries in rail and shipping. Today, innovative entrepreneurs aren’t looking to the West for the next “gold rush,” but to the sky. A host of voices in fields as diverse as finance and astrophysics have predicted that Earth’s first trillionaires will be minted in space through asteroid mining, 3D printing, and satellite servicing. When will the generation of 2049-ers take to the stars, and how will the space rush change our world and our lives?

This year NASA will launch its next great telescope, the James Webb Space Telescope, into space. This cosmic time machine, which NASA built, tested, and assembled in partnering with ESA (European Space Agency) and the Canadian Space Agency, will be the largest and most complex telescope ever to launch into space and an engineering feat like no other. As the scientific successor to the beloved Hubble Space Telescope and 100 times more powerful, Webb will look back 13.5 billion years to explore uncharted territories in the first epoch of galaxy formation – a part of the universe never seen before. Webb will also have the amazing capability to study exoplanet atmospheres in unprecedented detail. The tennis court-size observatory is designed to answer some of humankind’s most puzzling questions.

We Live in a Universe of Horrors

There are many deadly and mysterious phenomena in the universe – from powerful gamma ray bursts and invisible dark matter, to exoplanets (planets outside our solar system) that literally rain glass. Join NASA scientists and communicators in a panel discussion about some of the real and terrifying marvels beyond our solar system. They will expose some of the dangers lurking in the darkness of space and reveal the process of communicating these chilling phenomena by intersecting science and visual arts.

Data of objects from space have been liberated from the 2D imagery they have long lived inside. NASA experts now deliver these data so that people can listen, feel, and (virtually) move through the cosmos via holograms and other forms of extended reality. These data taken from telescopes in space – often in light invisible to the human eye – can be transformed into many different modes of experience, providing access to some of space’s most interesting and mysterious objects, and making it more inclusive across platforms used for education, entertainment and research. From listening to sounds around the giant black hole at the Milky Way’s center to walking through the debris of an exploded star in virtual reality, our universe is universally designed and revealed anew.

By All, for All: Citizen Science to Reveal Cosmos

Confirming an exoplanet from another solar system, fighting light pollution to view the cosmos, or refining the trajectory and the shape of an asteroid coming near Earth: Uncharted space territories can now be explored by the people, leading to a much better understanding of our cosmic surroundings. Come chat with NASA, the SETI Institute, Globe at Night, and citizen astronomers from the Unistellar network to learn how you, too, can join this space journey.

Rise Up: Black Women & Girls Reaching for the Stars

At the critical juncture of the national reckonings on racial and gender equality are women of color, with Black women often the most marginalized and underrepresented. Yet they have remarkable potential to elevate our nation and the world because diversity is key to innovation, and those who have persevered are uniquely suited to excellence. As such, the voices of Black women are crucial in any discussion of the future. This presentation will feature two women from JHU/APL and NASA who have made history in their own right, sharing their inspirational journeys, compelling data illustrating the current status and historic achievements of Black women, thoughts from notable Black women in STEM across the country, and experiences of real hidden figures submitted by attendees and the public.

Stepping Into Space: The ISS Experience

Join NASA astronaut Jessica Meir, Félix Lajeunesse, creative director from Felix & Paul Studios, and Jonathan Woods, executive producer from TIME Studios, as they discuss the making of Space Explorers: The ISS Experience, the largest production ever filmed in space. Shot over two years, the series offers an intimate take on the joy, wonder, and dangers of life in orbit as Jessica Meir and seven of her fellow astronauts take on life-changing missions aboard the International Space Station. Joined by moderator Laura Mingail, Meir, Lajeunesse and Woods will share their personal experiences, challenges and the meaning that their epic four-part immersive series conveys for each.

Learn more about NASA and its missions and programs at: