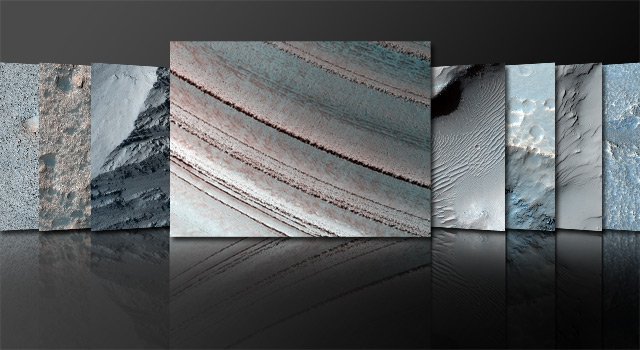 A composite of the first images of Martian sites suggested by the public as part of a participatory exploration program with NASA's Mars Reconnaissance Orbiter.› See all images
Credit: NASA/JPL-Caltech/University of Arizona

The most powerful camera aboard a NASA spacecraft orbiting Mars has returned the first pictures of locations on the Red Planet suggested by the public.

PASADENA, Calif. -- The most powerful camera aboard a NASA spacecraft orbiting Mars has returned the first pictures of locations on the Red Planet suggested by the public.

The High Resolution Imaging Science Experiment, or HiRISE camera, aboard NASA's Mars Reconnaissance Orbiter is nicknamed, "the people's camera." Through a program called HiWish that began in January, scientists have received approximately 1,000 suggestions. The first eight images of areas the public selected are available online at: http://www.nasa.gov/mission_pages/MRO/multimedia/images20100331.html .

"NASA's Mars program is a prime example of what we call participatory exploration," NASA Administrator Charlie Bolden said. "To allow the public to aim a camera at a specific site on a distant world is an invaluable teaching tool that can help educate and inspire our youth to pursue careers in science, technology, engineering and math."

Since 2006, HiRISE has obtained approximately 13,000 observations covering dozens of square miles, including areas from a student-suggestion program called NASA Quest. However, only about 1 percent of the Martian surface has been photographed.

NASA has provided other opportunities for the public to see and explore Mars. A camera on NASA's Mars Global Surveyor imaged 1,086 targets suggested through a public-request program from 2003 until 2006. Launched on Nov. 7, 1996, the probe pioneered the use of aerobraking at Mars and mapped the surface. The original one-year mission was extended four times until November 2006.

"Some people get into model railroading or Civil War re-enactments. My thing is exploring Mars," said James Secosky, a retired teacher in Manchester, N.Y., who suggested an area for HiRISE imaging after he examined online images from other Mars-orbiting cameras.

Another camera aboard NASA's Mars Odyssey orbiter has taken nearly 500 images after receiving approximately 1,400 suggestions through a public-request program initiated in 2009. Odyssey has been orbiting Mars since 2001. It serves as a communications relay for Mars rovers and makes its own observations and discoveries.

HiRISE is one of six instruments on the Mars Reconnaissance Orbiter. Launched in August 2005, the orbiter reached Mars the following year to begin a two-year primary science mission. The spacecraft has found that Mars has had diverse wet environments at many locations for differing durations in the planet's history, and Martian climate-change cycles persist into the present era. The mission is in an extended science phase. The spacecraft will continue to take several thousand images a year. The mission has returned more data about Mars than all other spacecraft to the Red Planet combined.

"What we hope is that people become more interested in science and appreciate this opportunity to explore another world," said Alfred McEwen, principal investigator for the camera at the University of Arizona in Tucson. "We appreciate fresh thinking outside the box and look for things we may not have chosen otherwise. It's good to have a lot of eyes on Mars."