These images from the High Resolution Imaging Science Experiment (HiRISE) camera on NASA's Mars Reconnaissance Orbiter show how the appearance of dark markings on Martian slope changes with the seasons.› Full image and caption
Credit: NASA/JPL-Caltech/Univ. of Arizona 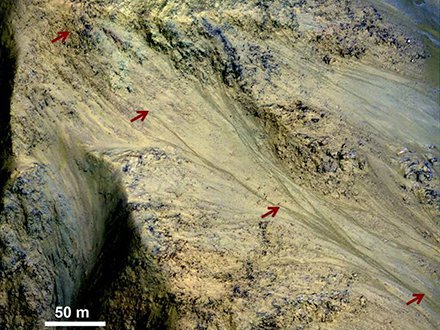 This image includes an especially long example of a type of dark marking that advances down some Martian slopes in warmer months and fades away in cooler months.› Full image and caption
Credit: NASA/JPL-Caltech/Univ. of Arizona 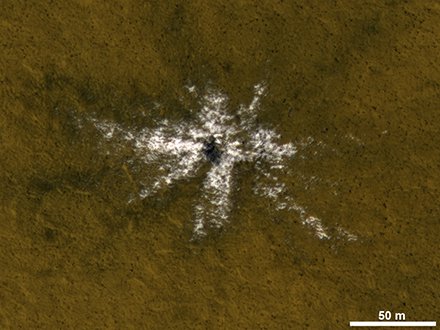 This image taken on May 19, 2010, shows an impact crater that had not existed when the same location on Mars was previously observed in March 2008.› Full image and caption
Credit: NASA/JPL-Caltech/Univ. of Arizona 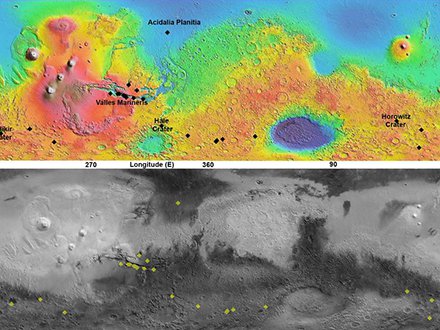 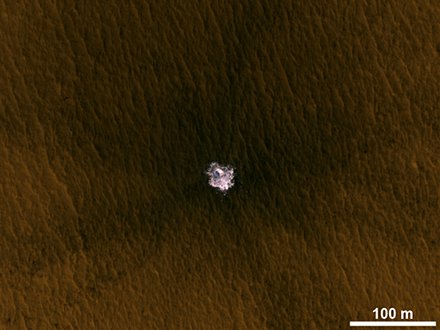 A meteorite impact that excavated this crater on Mars exposed bright ice that had been hidden just beneath the surface at this location: latitude 43.9 degrees north, longitude 204.3 degrees east.› Full image and caption
Credit: NASA/JPL-Caltech/Univ. of Arizona

"The equatorial surface region of Mars has been regarded as dry, free of liquid or frozen water, but we may need to rethink that," said Alfred McEwen of the University of Arizona in Tucson, principal investigator for the Mars Reconnaissance Orbiter (MRO) High Resolution Imaging Science Experiment (HiRISE) camera.

Tracking how these features recur each year is one example of how the longevity of NASA orbiters observing Mars is providing insight about changes on many time scales. Researchers at the American Geophysical Union meeting Tuesday in San Francisco discussed a range of current Martian activity, from fresh craters offering glimpses of subsurface ice to multi-year patterns in the occurrence of large, regional dust storms.

The seasonally changing surface flows were first reported two years ago on mid-latitude southern slopes. They are finger-like features typically less than 16 feet (5 meters) wide that appear and extend down steep, rocky slopes during spring through summer, then fade in winter and return the next spring. Recently observed slopes stretch as long as 4,000 feet (1,200 meters).

McEwen and co-authors reported the equatorial flows at the conference and in a paper published online Tuesday by Nature Geoscience. Five well-monitored sites with these markings are in Valles Marineris, the largest canyon system in the solar system. At each of these sites, the features appear on both north- and south-facing walls. On the north-facing slopes, they are active during the part of the year when those slopes get the most sunshine. The counterparts on south-facing slopes start flowing when the season shifts and more sunshine hits their side.

"The explanation that fits best is salty water is flowing down the slopes when the temperature rises," McEwen said. "We still don't have any definite identification of water at these sites, but there's nothing that rules it out, either."

Dissolved salts can keep water melted at temperatures when purer water freezes, and they can slow the evaporation rate so brine can flow farther. This analysis used data from the Compact Reconnaissance Imaging Spectrometer for Mars and the Context Camera on the MRO as well as the Thermal Emission Imaging System experiment on NASA's Mars Odyssey orbiter.

Water ice has been identified in another dynamic process researchers are monitoring with MRO. Impacts of small asteroids or bits of comets dig many fresh craters on Mars every year. Twenty fresh craters have exposed bright ice previously hidden beneath the surface. Five were reported in 2009. The 15 newly reported ones are distributed over a wider range of latitudes and longitudes.

"The more we find, the more we can fill in a global map of where ice is buried," said Colin Dundas of the U.S. Geological Survey in Flagstaff, Ariz. "We've now seen icy craters down to 39 degrees north, more than halfway from the pole to the equator. They tell us that either the average climate over several thousand years is wetter than present or that water vapor in the current atmosphere is concentrated near the surface. Ice could have formed under wetter conditions, with remnants from that time persisting today, but slowly disappearing."

Mars' modern climate becomes better known each year because of a growing set of data from a series of orbiters that have been studying Mars continually since 1997. That has been almost nine Martian years because a year on Mars is almost two years long on Earth. Earlier missions and surface landers have added insight about the dynamics of Mars' atmosphere and its interaction with the ground.

"The dust cycle is the main driver of the climate system," said Robert Haberle of NASA's Ames Research Center in Moffett Field, Calif.

One key question researchers want to answer is why dust storms encircle Mars in some years and not in others. These storms affect annual patterns of water vapor and carbon dioxide in the atmosphere, freezing into polar ice caps in winter and replenishing the atmosphere in spring. Identifying significant variations in annual patterns requires many Martian years of observations.

The data emerging from long-term studies will help future human explorers of Mars know where to find resources such as water, how to prepare for hazards such as dust storms, and where to be extra careful about contamination with Earth microbes.

Launched in 2005, Mars Reconnaissance Orbiter and its six instruments have provided more high-resolution data about the Red Planet than all other Mars orbiters combined. Data are made available for scientists worldwide to research, analyze and report their findings.