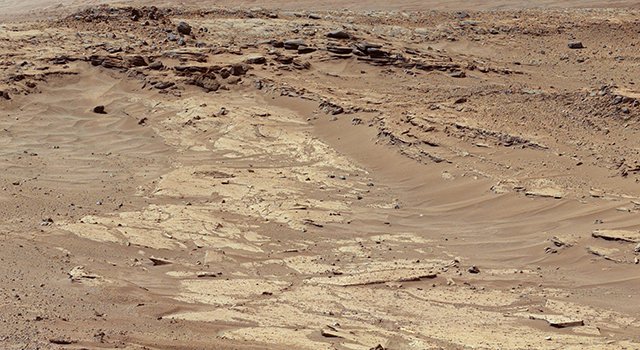 Sandstone layers with varying resistance to erosion are evident in this Martian scene recorded by the Mast Camera on NASA's Curiosity Mars rover on Feb. 25, 2014, about one-quarter mile (about 400 meters) from a planned waypoint called "the Kimberley."› Full image and caption
Credit: NASA/JPL-Caltech/MSSS 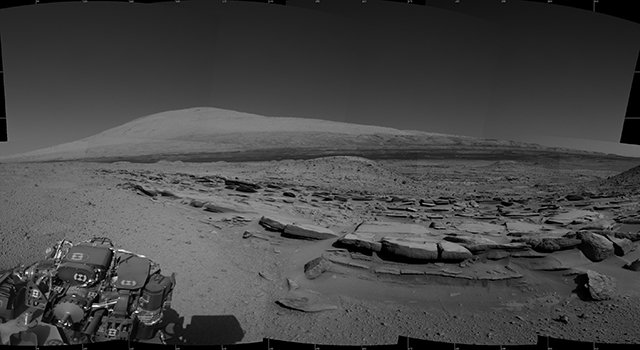 This view from NASA's Curiosity Mars rover spans 360 degrees, centered southward toward a planned science waypoint at "the Kimberley," with an outcrop of eroded sandstone in the foreground.› Full image and caption
Credit: NASA/JPL-Caltech 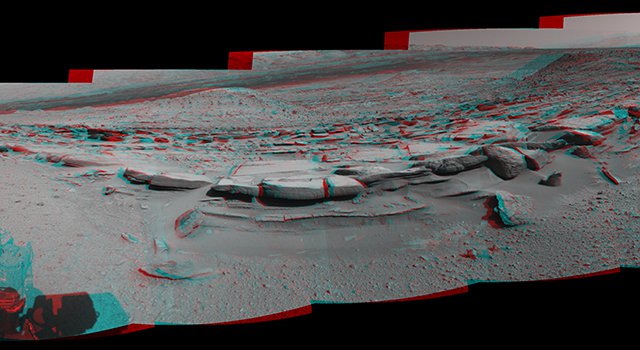 NASA's Curiosity Mars rover is approaching a waypoint where sandstone layers exhibit textures that may tell of ancient environmental changes.

Variations in the stuff that cements grains together in sandstone have shaped the landscape surrounding NASA's Curiosity Mars rover and could be a study topic at the mission's next science waypoint.

On a journey with many months yet to go toward prime destinations on the lower slope of Mount Sharp, Curiosity is approaching a site called "the Kimberley." Scientists on the team picked this location last year as a likely place to pause for investigation. Its informal name comes from a northwestern Australia region known as the Kimberley. The Martian site's geological appeal, based on images taken from orbit, is that four types of terrain with different rock textures intersect there.

"The orbital images didn't tell us what those rocks are, but now that Curiosity is getting closer, we're seeing a preview," said Curiosity Deputy Project Scientist Ashwin Vasavada of NASA's Jet Propulsion Laboratory, Pasadena, Calif. "The contrasting textures and durabilities of sandstones in this area are fascinating. While superficially similar, the rocks likely formed and evolved quite differently from each other."

The rocks that the Curiosity mission has studied most intensively so far are finer-grain mudstone, rather than sandstone. The rover found evidence for an ancient lakebed environment favorable for microbial life when it analyzed sample powder drilled from mudstone last year in an area called "Yellowknife Bay."

The rover team is eager to inspect sandstone at the planned waypoint, now just 282 feet (86 meters) south of the rover. The pause for investigations at this site might include time for collecting rock-sample material with the rover's drill, for delivery to the laboratory instruments inside the vehicle.

Material filling the space between grains of sand in sandstone is called cement, whatever its composition. Characteristics of the cement can vary greatly, depending on the environmental history that affected the rock. Sandstones with some clay-mineral cements are quite soft. Tap them with a hammer and they crumble. Sandstones with quartz cement can be very hard. Hit them with a hammer and they ring.

"A major issue for us now is to understand why some rocks resist erosion more than other rocks, epecially when they are so close to each other and are both likely to be sandstones," said Michael Malin of Malin Space Science Systems, San Diego. He is the principal investigator for the Mast Camera and the Mars Descent Camera on Curiosity.

Malin said that variations in cement material of sandstones could provide clues to different types of wet environmental conditions in the area's history.

As in the southwestern United States, understanding why some sandstones are harder than others could help explain the major shapes of the landscape where Curiosity is working inside Gale Crater on Mars. Erosion-resistant sandstone forms a capping layer of mesas and buttes. It could even hold hints about why Gale Crater has a large layered mountain, Mount Sharp, at its center.

Erosion-resistant capping layers that Curiosity has sometimes driven across during the rover's traverse since leaving Yellowknife Bay have also presented an engineering challenge for the mission. Some rocks within those layers have sharp points that have punched holes in the rover's aluminum wheels. One of the strategies the rover team has used to reduce the pace of wheel damage is choosing routes that avoid crossing the hard caprock, where feasible.

"The wheel damage rate appears to have leveled off, thanks to a combination of route selection and careful driving," said JPL's Richard Rainen, mechanical engineering team leader for Curiosity. "We're optimistic that we're doing OK now, though we know there will be challenging terrain to cross in the future."

The pace at which new holes have appeared in the wheels during recent drives is less than one-tenth what it was a few months ago. Activities with a test rover at JPL this month show that wheels with much more extensive damage than has been sustained by any of Curiosity's six wheels can still perform well. The holes in Curiosity's wheels are all in the thin aluminum skin between much thicker treads. These tests on Earth are using wheels so damaged that many treads are broken, but they still provide traction.