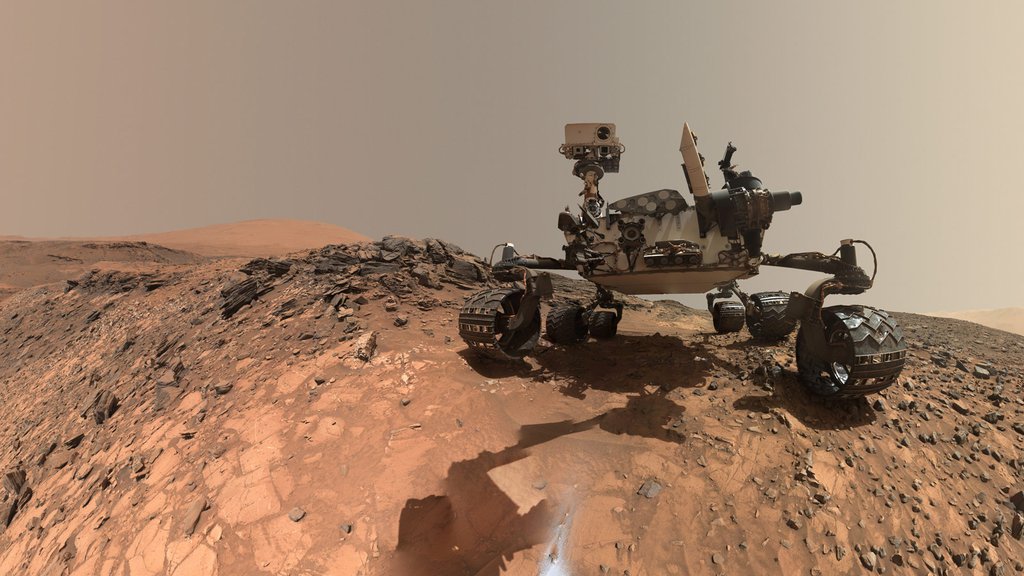 This low-angle self-portrait of NASA's Curiosity Mars rover shows the vehicle at the site from which it reached down to drill into a rock target called "Buckskin."› Full image and caption
Credit: NASA/JPL-Caltech/MSSS 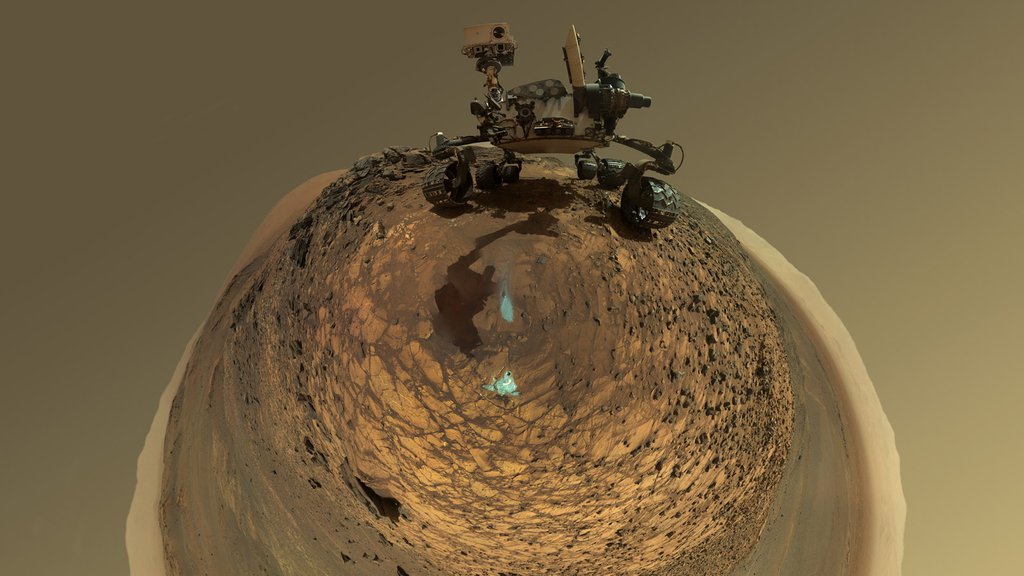 This version of a self-portrait of NASA's Curiosity Mars rover at a drilling site called "Buckskin" is presented as a stereographic projection, which shows the horizon as a circle.› Full image and caption
Credit: NASA/JPL-Caltech/MSSS 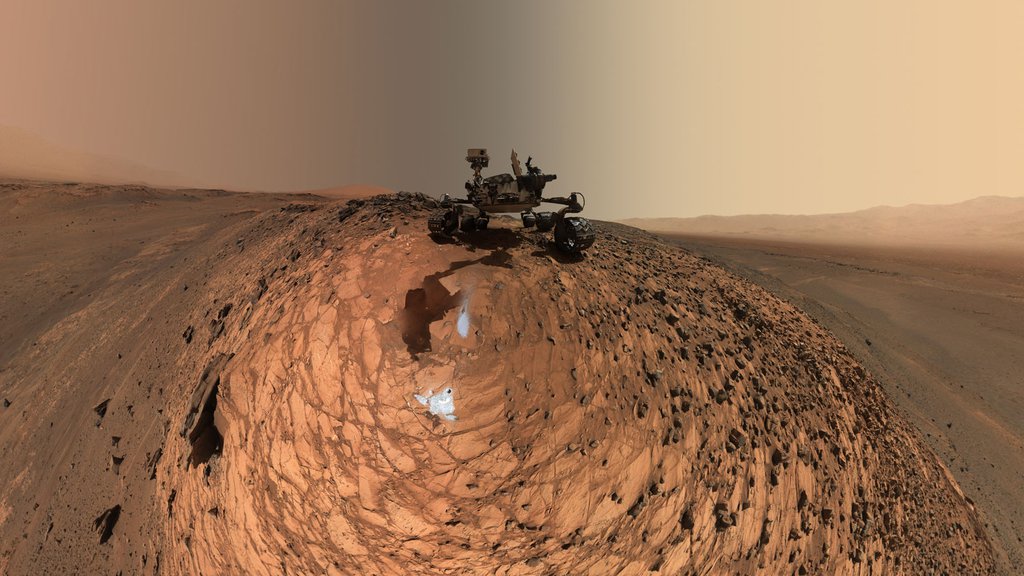 This low-angle self-portrait of NASA's Curiosity Mars rover from Aug. 5, 2015, shows the vehicle above the "Buckskin" rock target in the "Marias Pass" area of lower Mount Sharp.› Full image and caption
Credit: NASA/JPL-Caltech/MSSS 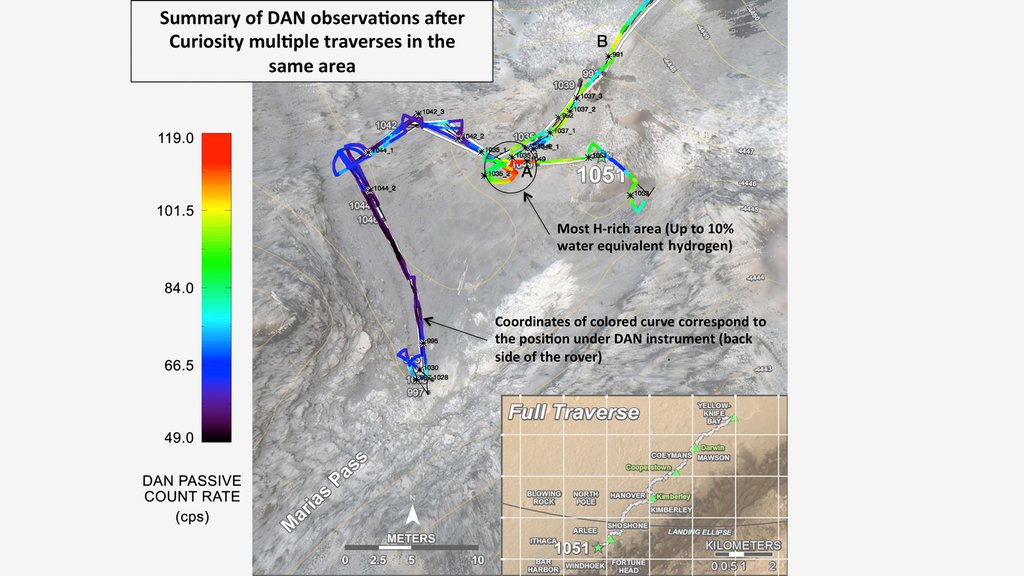 Curiosity's DAN instrument for checking hydration levels in the ground beneath the rover detected an unusually high amount at a site near "Marias Pass," prompting repeated passes over the area to map the hydrogen amounts.› Full image and caption
Credit: NASA/JPL-Caltech/Russian Space Research Institute 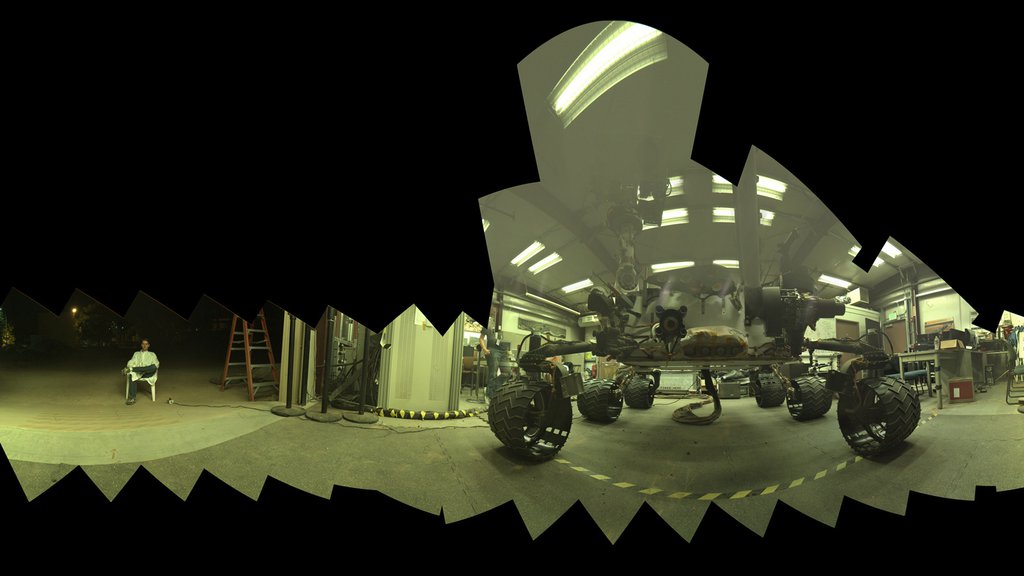 This view of a test rover at NASA's Jet Propulsion Laboratory in California results from advance testing of arm positions and camera pointings for taking a low-angle selfie of NASA's Curiosity Mars rover.› Full image and caption
Credit: NASA/JPL-Caltech/MSSS

After taking a low-angle selfie at its latest drilling site, NASA's Curiosity Mars rover has departed the area called "Marias Pass," where it had been working since May.

NASA's Curiosity Mars rover is driving toward the southwest after departing a region where for several weeks it investigated a geological contact zone and rocks that are unexpectedly high in silica and hydrogen content. The hydrogen indicates water bound to minerals in the ground.

In this "Marias Pass" region, Curiosity successfully used its drill to sample a rock target called "Buckskin" and then used the camera on its robotic arm for multiple images to be stitched into a self-portrait at the drilling site. The new Curiosity selfie from a dramatically low angle is online at:

Curiosity is carrying with it some of the sample powder drilled from Buckskin. The rover's internal laboratories are analyzing the material. The mission's science team members seek to understand why this area bears rocks with significantly higher levels of silica and hydrogen than other areas the rover has traversed.

Silica, monitored with Curiosity's laser-firing Chemistry and Camera (ChemCam) instrument, is a rock-forming chemical containing silicon and oxygen, commonly found on Earth as quartz. Hydrogen in the ground beneath the rover is monitored by the rover's Dynamic Albedo of Neutrons (DAN) instrument. It has been detected at low levels everywhere Curiosity has driven and is interpreted as the hydrogen in water molecules or hydroxyl ions bound within or absorbed onto minerals in the rocks and soil.

"The ground about 1 meter beneath the rover in this area holds three or four times as much water as the ground anywhere else Curiosity has driven during its three years on Mars," said DAN Principal Investigator Igor Mitrofanov of Space Research Institute, Moscow. DAN first detected the unexpectedly high level of hydrogen using its passive mode. Later, the rover drove back over the area using DAN in active mode, in which the instrument shoots neutrons into the ground and detects those that bounce off the subsurface, but preferentially interacting with hydrogen. The measurements confirmed hydrated material covered by a thin layer of drier material.

Curiosity initially noted the area with high silica and hydrogen on May 21 while climbing to a site where two types of sedimentary bedrock lie in contact with each other. Such contact zones can hold clues about ancient changes in environment, from conditions that produced the older rock type to conditions that produced the younger one. This contact is the lure that led the rover team to choose Marias Pass as a route toward higher layers of Mount Sharp. Pale mudstone, like bedrock the mission examined for the first several months after reaching Mount Sharp at an area called "Pahrump Hills," forms one side of the contact. The overlying side is darker, finely bedded sandstone.

Curiosity examined the Marias Pass contact zone closely with instruments mounted on its mast and arm. The unusual levels of silica and hydrogen in rocks passed during the climb prompted a choice to backtrack to examine that area and acquire a drilled sample.

Buckskin was the first rock drilled by Curiosity since an electrical circuit in the drill's percussion mechanism exhibited a small, transient short circuit in February during transfer of sample powder from the third target drilled in the Pahrump Hills area.

"We were pleased to see no repeat of the short circuit during the Buckskin drilling and sample transfer," said Steven Lee, deputy project manager for Curiosity at NASA's Jet Propulsion Laboratory, Pasadena, California. "It could come back, but we have made changes in fault protection to continue safely drilling even in the presence of small shorts. We also improved drill percuss circuit telemetry to gain more diagnostic information from any future occurrences."

Curiosity reached the base of Mount Sharp after two years of fruitfully investigating outcrops closer to its landing site and trekking to the mountain. The main mission objective now is to examine layers of lower Mount Sharp for ancient habitable environments and evidence about how early Mars environments evolved from wetter to drier conditions.