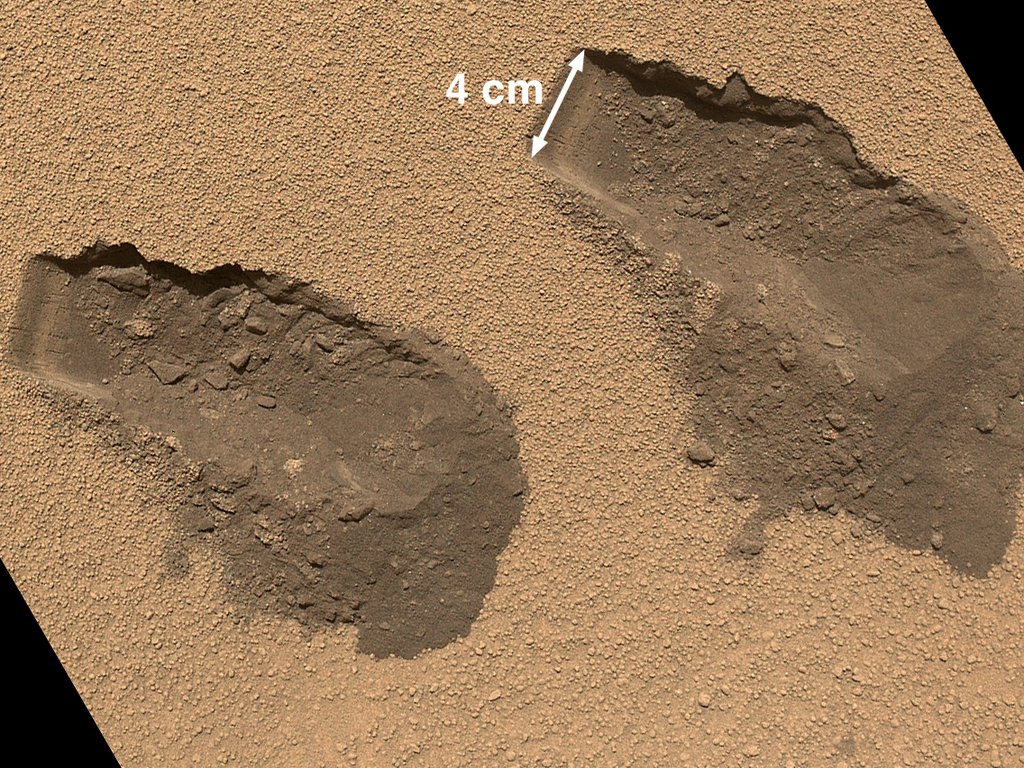 This is a view of the third (left) and fourth (right) trenches made by the 1.6-inch-wide (4-centimeter-wide) scoop on NASA's Mars rover Curiosity in October 2012.
Credit: NASA/JPL-Caltech/MSSS 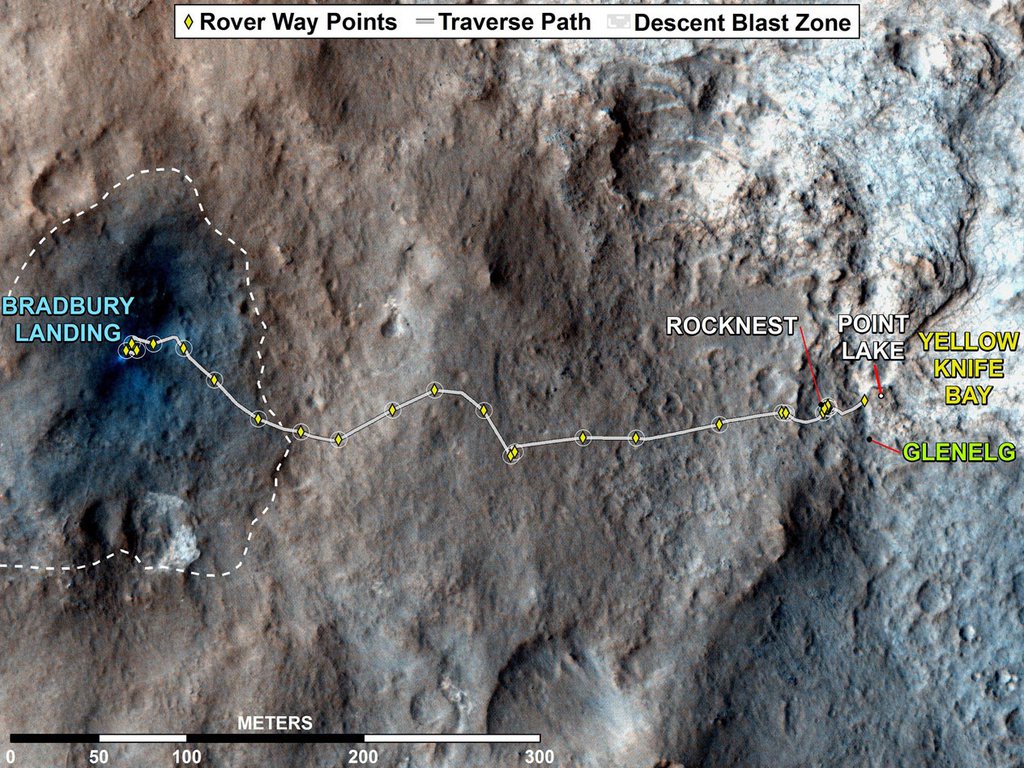 This map shows where NASA's Mars rover Curiosity has driven since landing at a site subsequently named "Bradbury Landing," and traveling to an overlook position near beside "Point Lake," in drives totaling 1,703 feet (519 meters).› Full image and caption
Credit: NASA/JPL-Caltech/Univ. of Arizona 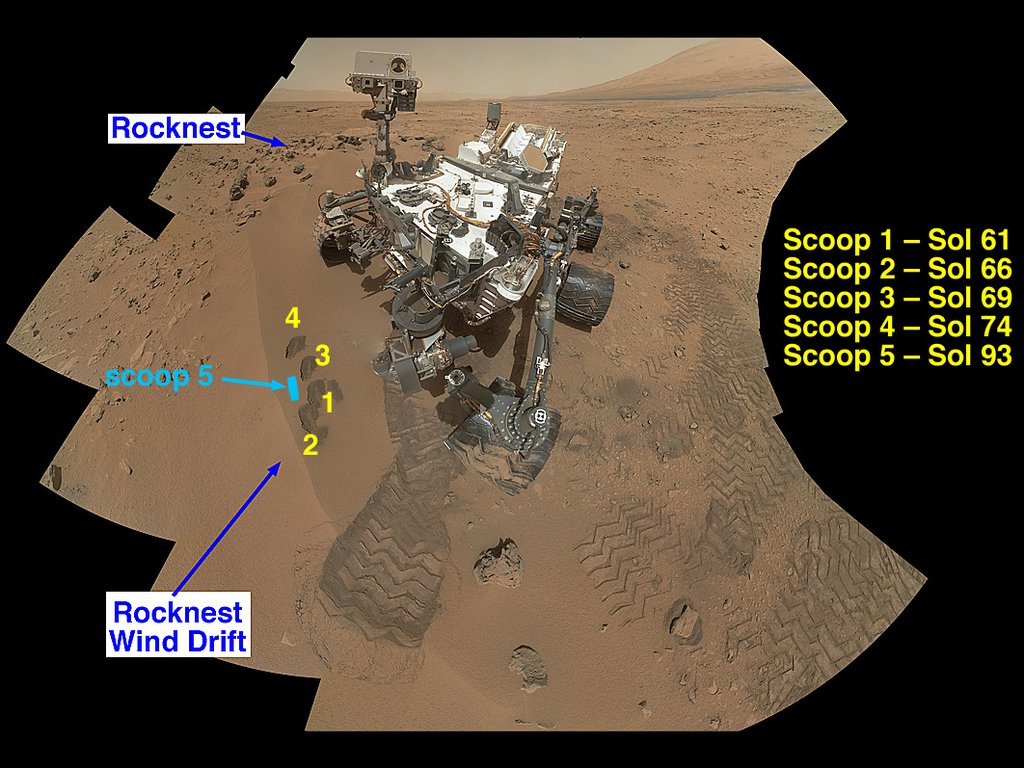 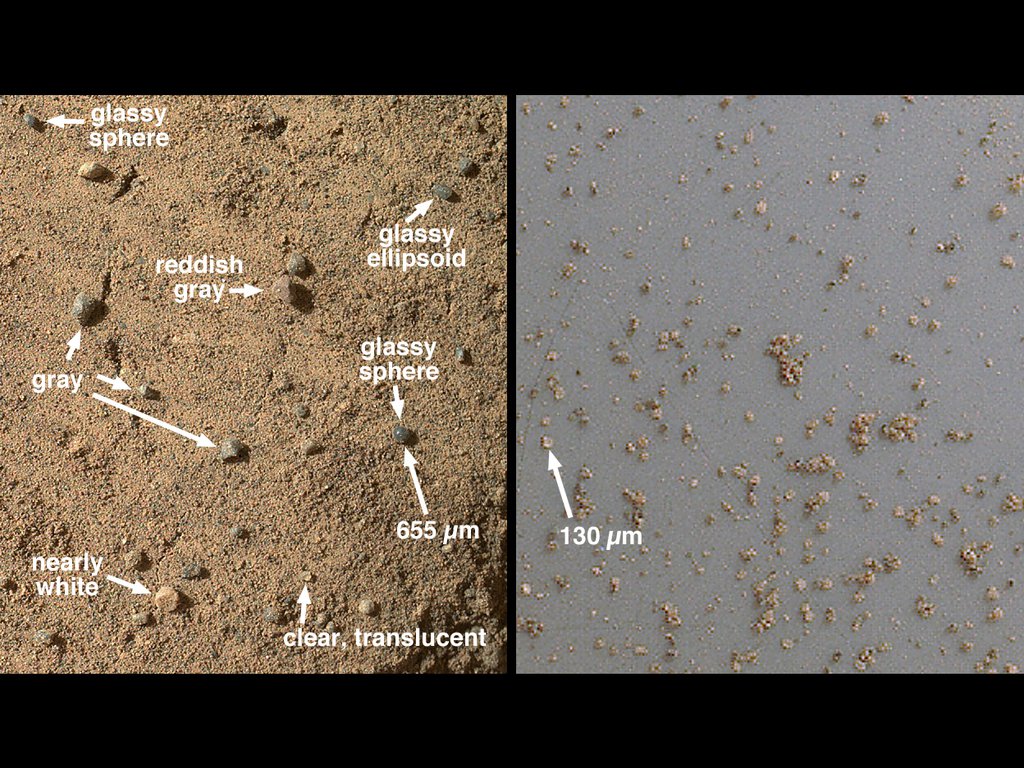 The Mars Hand Lens Imager (MAHLI) on NASA's Mars rover Curiosity acquired close-up views of sands in the "Rocknest" wind drift to document the nature of the material that the rover scooped, sieved and delivered to the Chemistry and Mineralogy Experiment (CheMin) and the Sample Analysis at Mars (SAM) in October and November 2012.
Credit: NASA/JPL-Caltech/MSSS 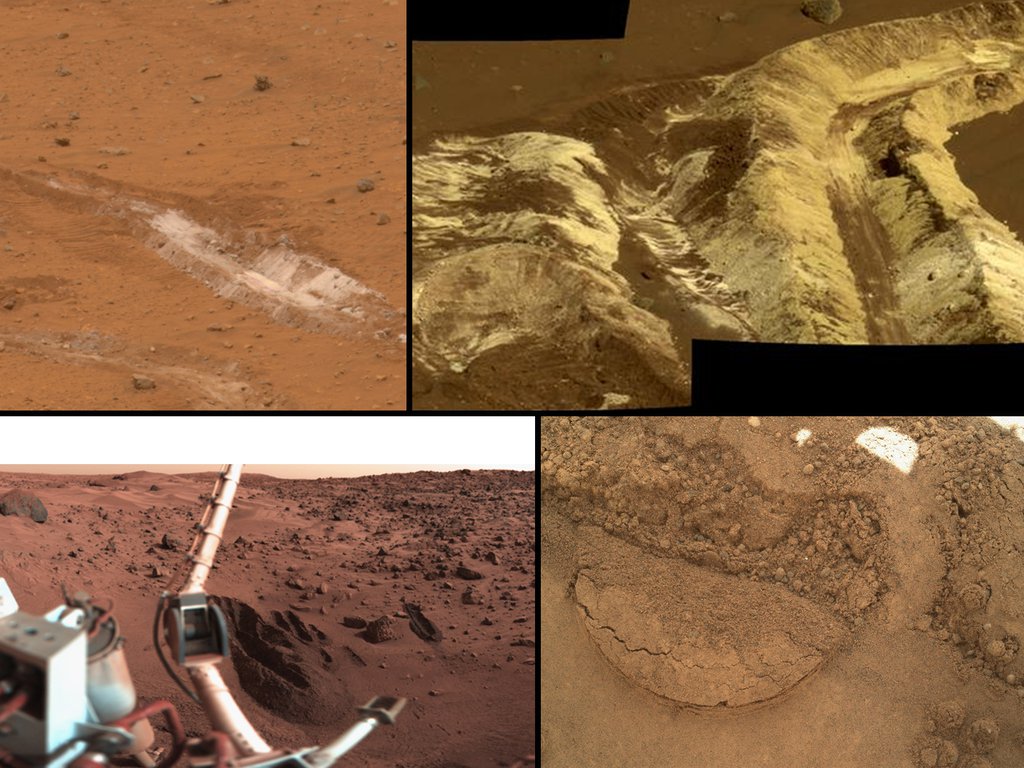 This collage shows the variety of soils found at landing sites on Mars. The elemental composition of the typical, reddish soils were investigated by NASA's Viking, Pathfinder and Mars Exploration Rover missions, and now with the Curiosity rover, using X-ray spectroscopy.› Full image and caption
Credit: NASA/JPL-Caltech 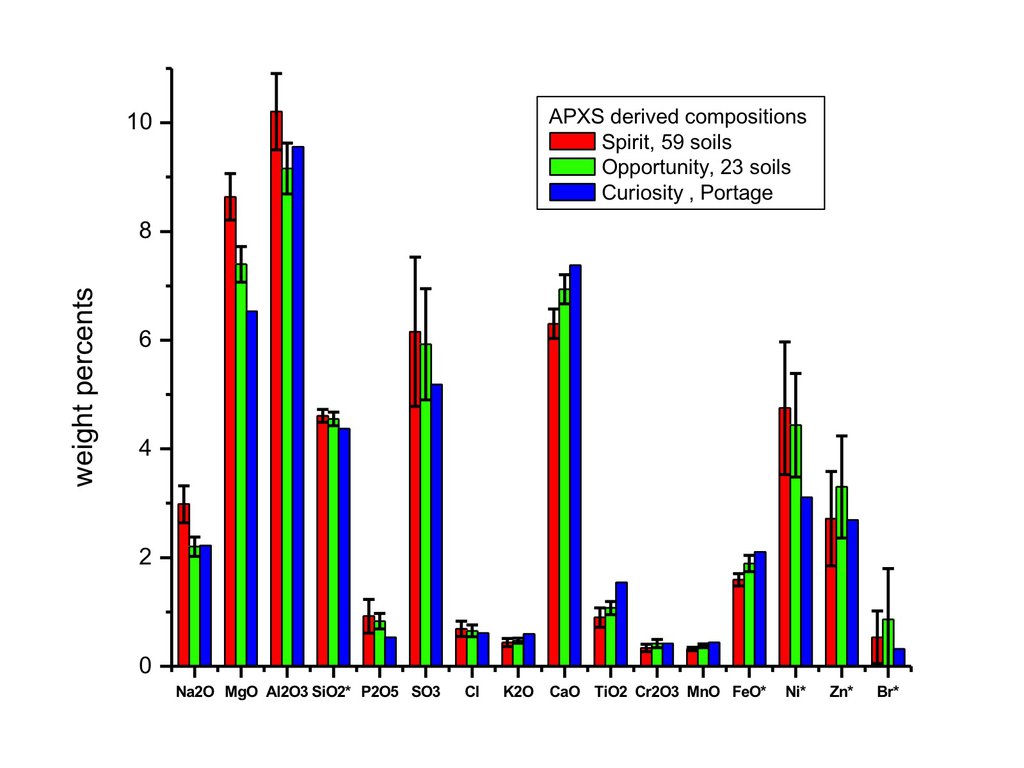 NASA's Mars Curiosity rover has used its full array of instruments to analyze Martian soil for the first time, and found a complex chemistry within the Martian soil.

PASADENA, Calif. - NASA's Mars Curiosity rover has used its full array of instruments to analyze Martian soil for the first time, and found a complex chemistry within the Martian soil. Water and sulfur and chlorine-containing substances, among other ingredients, showed up in samples Curiosity's arm delivered to an analytical laboratory inside the rover.

Detection of the substances during this early phase of the mission demonstrates the laboratory's capability to analyze diverse soil and rock samples over the next two years. Scientists also have been verifying the capabilities of the rover's instruments.

Curiosity is the first Mars rover able to scoop soil into analytical instruments. The specific soil sample came from a drift of windblown dust and sand called "Rocknest." The site lies in a relatively flat part of Gale Crater still miles away from the rover's main destination on the slope of a mountain called Mount Sharp. The rover's laboratory includes the Sample Analysis at Mars (SAM) suite and the Chemistry and Mineralogy (CheMin) instrument. SAM used three methods to analyze gases given off from the dusty sand when it was heated in a tiny oven. One class of substances SAM checks for is organic compounds -- carbon-containing chemicals that can be ingredients for life.

"We have no definitive detection of Martian organics at this point, but we will keep looking in the diverse environments of Gale Crater," said SAM Principal Investigator Paul Mahaffy of NASA's Goddard Space Flight Center in Greenbelt, Md.

Curiosity's team selected Rocknest as the first scooping site because it has fine sand particles suited for scrubbing interior surfaces of the arm's sample-handling chambers. Sand was vibrated inside the chambers to remove residue from Earth. MAHLI close-up images of Rocknest show a dust-coated crust one or two sand grains thick, covering dark, finer sand.

"Active drifts on Mars look darker on the surface," said MAHLI Principal Investigator Ken Edgett, of Malin Space Science Systems in San Diego. "This is an older drift that has had time to be inactive, letting the crust form and dust accumulate on it."

CheMin's examination of Rocknest samples found the composition is about half common volcanic minerals and half non-crystalline materials such as glass. SAM added information about ingredients present in much lower concentrations and about ratios of isotopes. Isotopes are different forms of the same element and can provide clues about environmental changes. The water seen by SAM does not mean the drift was wet. Water molecules bound to grains of sand or dust are not unusual, but the quantity seen was higher than anticipated.

SAM tentatively identified the oxygen and chlorine compound perchlorate. This is a reactive chemical previously found in arctic Martian soil by NASA's Phoenix Lander. Reactions with other chemicals heated in SAM formed chlorinated methane compounds -- one-carbon organics that were detected by the instrument. The chlorine is of Martian origin, but it is possible the carbon may be of Earth origin, carried by Curiosity and detected by SAM's high sensitivity design.

"We used almost every part of our science payload examining this drift," said Curiosity Project Scientist John Grotzinger of the California Institute of Technology in Pasadena. "The synergies of the instruments and richness of the data sets give us great promise for using them at the mission's main science destination on Mount Sharp."

NASA's Mars Science Laboratory Project is using Curiosity to assess whether areas inside Gale Crater ever offered a habitable environment for microbes. NASA's Jet Propulsion Laboratory in Pasadena, a division of Caltech, manages the project for NASA's Science Mission Directorate in Washington, and built Curiosity.

For more information about Curiosity and other Mars missions, visit: http://www.nasa.gov/mars .