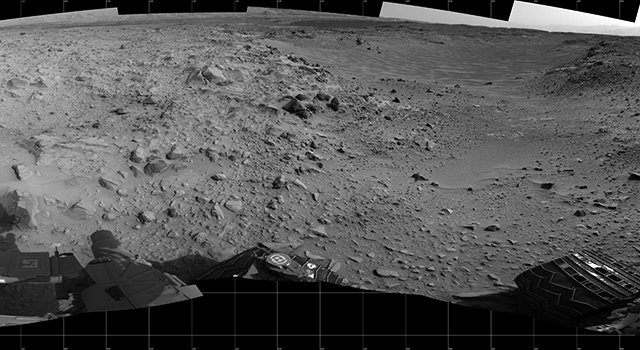 This full-circle panorama of the landscape surrounding NASA's Curiosity Mars rover on July 31, 2014, offers a view into sandy lower terrain called "Hidden Valley," which is on the planned route ahead. It combines several images from Curiosity's Navigation Camera. South is at the center.› Full image and caption
Credit: NASA/JPL-Caltech 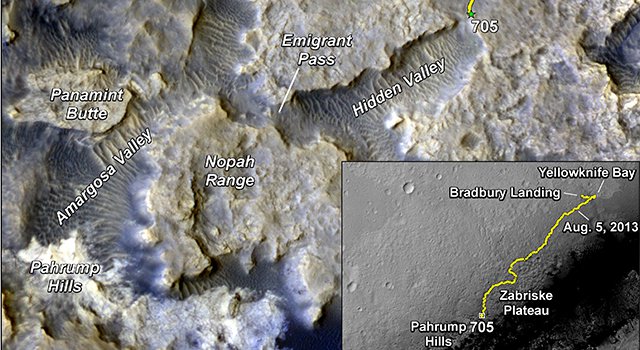 The main map shows landforms near NASA's Curiosity Mars rover as the rover's second anniversary of landing on Mars nears. The gold traverse line ends at Curiosity's position as of July 31, 2014 (Sol 705). The inset shows the entire traverse and the remaining distance to Murray Buttes.› Full image and caption
Credit: NASA/JPL-Caltech

NASA's Curiosity Mars rover has just crossed one stretch of rocks hazardous to its wheels and may soon reach rocks different from any it has examined so far.

As it approaches the second anniversary of its landing on Mars, NASA's Curiosity rover is also approaching its first close look at bedrock that is part of Mount Sharp, the layered mountain in the middle of Mars' Gale Crater.

The mission made important discoveries during its first year by finding evidence of ancient lake and river environments. During its second year, it has been driving toward long-term science destinations on lower slopes of Mount Sharp. Those destinations are in an area beginning about 2 miles (3 kilometers) southwest of the rover's current location, but an appetizer outcrop of a base layer of the mountain lies much closer -- less than one-third of a mile (500 meters) from Curiosity. The rover team is calling the outcrop "Pahrump Hills."

"We're coming to our first taste of a geological unit that's part of the base of the mountain rather than the floor of the crater," said Curiosity Project Scientist John Grotzinger of the California Institute of Technology, Pasadena. "We will cross a major terrain boundary."

For about half of July, the rover team at NASA's Jet Propulsion Laboratory in Pasadena, California, drove Curiosity across an area of hazardously sharp rocks called "Zabriskie Plateau." Damage to Curiosity's aluminum wheels from driving across similar terrain last year prompted a change in route planning to skirt such rock-studded terrain wherever feasible. The one-eighth mile (200 meters) across Zabriski Plateau was one of the longest stretches without a suitable detour on the redesigned route toward the long-term science destination.

"The wheels took some damage getting across Zabriskie Plateau, but it's less than I expected from the amount of hard, sharp rocks embedded there," said JPL's Jim Erickson, project manager for Curiosity. "The rover drivers showed that they're up to the task of getting around the really bad rocks. There will still be rough patches ahead. We didn't imagine prior to landing that we would see this kind of challenge to the vehicle, but we're handling it."

Another recent challenge appeared last week in the form of unexpected behavior by an onboard computer currently serving as backup. Curiosity carries duplicate main computers. It has been operating on its B-side computer since a problem with the A-side computer prompted the team to command a side swap in February 2013. Work in subsequent weeks of 2013 restored availability of the A-side as a backup in case of B-side trouble. Last week, fresh commanding of the rover was suspended for two days while engineers confirmed that the A-side computer remains reliable as a backup.

Curiosity landed inside Gale Crater on Aug. 5, 2012, PDT (Aug. 6, 2012, EDT). During its first year of operations, it fulfilled its major science goal of determining whether Mars ever offered environmental conditions favorable for microbial life. Clay-bearing sedimentary rocks on the crater floor in an area called Yellowknife Bay yielded evidence of a lakebed environment billions of years ago that offered fresh water, all of the key elemental ingredients for life, and a chemical source of energy for microbes, if any existed there.

NASA's Mars Science Laboratory Project continues to use Curiosity to assess ancient habitable environments and major changes in Martian environmental conditions. The destinations on Mount Sharp offer a series of layers that recorded different chapters in the environmental evolution of early Mars.