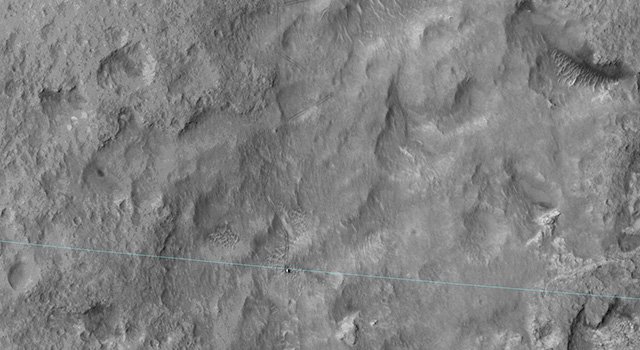 This June 27, 2014, image from the HiRISE camera on NASA's Mars Reconnaissance Orbiter shows NASA's Curiosity Mars rover on the rover's landing-ellipse boundary, which is superimposed on the image. The 12-mile-wide ellipse was mapped as safe terrain for its 2012 landing inside Gale Crater.› Full image and caption
Credit: NASA/JPL-Caltech/Univ. of Arizona

NASA Mars rover Curiosity has driven out of the ellipse, approximately 4 miles wide and 12 miles long (7 kilometers by 20 kilometers), that was mapped as safe terrain for its 2012 landing inside Gale Crater.

The High Resolution Imaging Science Experiment (HiRISE) camera on NASA's Mars Reconnaissance Orbiter photographed the rover on June 27 at the end of a drive that put Curiosity right on the ellipse boundary. An image from that observation is online at:

The landing ellipse is the area within which the rover had a very high probability of touching down when it arrived at Mars on Aug. 5, 2012, PDT (Aug. 6, UTC). The area needed to meet requrements for providing access to scientifically interesting sites while presenting few landing hazards, such as steep slopes or large boulders. Many areas of scientific interest have slopes ineligible for landing safety, and Curiosity was designed to have the capability of driving far enough to get to slopes ouside of the landing ellipse. Since landing, Curiosity has driven slightly more than 5 miles (8 kilometers).

For more information about the Mars Reconnaissance Orbiter, which has been studying Mars from orbit since 2006, visit

For more information about Curiosity, visit