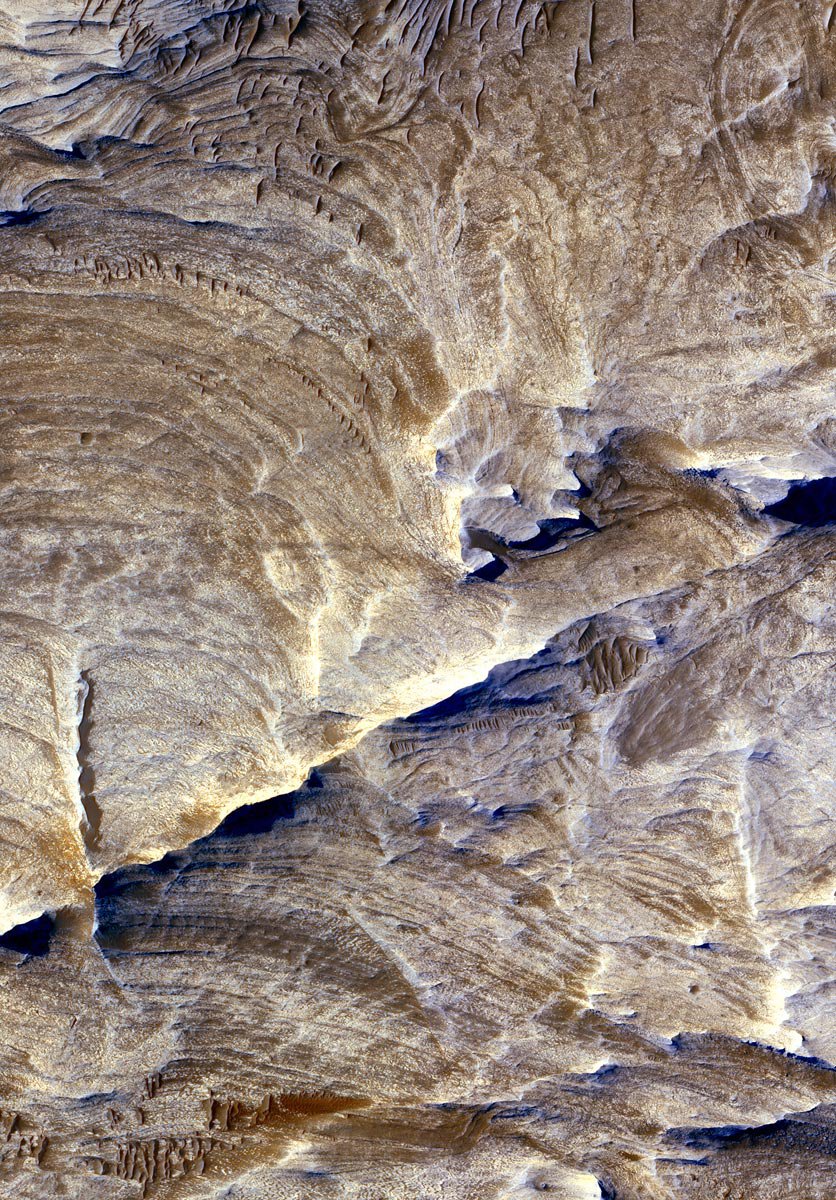 Liquid or gas flowed through cracks penetrating underground rock on ancient Mars, according to a report based on some of the first observations by NASA's Mars Reconnaissance Orbiter.

SAN FRANCISCO - Liquid or gas flowed through cracks penetrating underground rock on ancient Mars, according to a report based on some of the first observations by NASA's Mars Reconnaissance Orbiter. These fluids may have produced conditions to support possible habitats for microbial life.

These ancient patterns were revealed when the most powerful telescopic camera ever sent to Mars began examining the planet last year. The camera showed features as small as approximately 3 feet (one meter) across. Mineralization took place deep underground, along faults and fractures. These mineral deposits became visible after overlying layers were eroded away throughout millions of years.

Dr. Chris Okubo, a geologist at the University of Arizona, Tucson, discovered the patterns in an image of exposed layers in a Martian canyon named Candor Chasma. The image was taken in September 2006 by the High Resolution Imaging Science Experiment camera aboard the orbiter.

"What caught my eye was the bleaching or lack of dark material along the fracture. That is a sign of mineral alteration by fluids that moved through those joints," said Okubo. "It reminded me of something I had seen during field studies in Utah, that is light-tone zones, or 'haloes,' on either side of cracks through darker sandstone."

Dr. Alfred McEwen, the camera's principal investigator from the University of Arizona, Tucson, said, "This result shows how orbital observations can identify features of particular interest for future exploration on the surface or in the subsurface or by sample return. The alteration along fractures, concentrated by the underground fluids, marks locations where we can expect to find key information about chemical and perhaps biologic processes in a subsurface environment that may have been habitable."

The haloes visible along fractures seen in the Candor Chasma image appear to be slightly raised relative to surrounding, darker rock. This is evidence that the circulating fluids hardened the lining of the fractures, as well as bleaching it. The harder material would not erode away as quickly as softer material farther from the fractures.

The most likely origin for these features is that minerals that were dissolved in water came out of solution and became part of the rock material lining the fractures. Another possibility is that the circulating fluid was a gas, which may or may not have included water vapor in its composition, Okubo said.

Similar haloes adjacent to fractures show up in images that the high-resolution camera took of other places on Mars after the initial Candor Chasma image. "We are excited to be seeing geological features too small to have been noticed previously," Okubo said.

"This publication is just the first of many, many to come. The analysis is based on test observations taken even before the start of our main science phase. Since then, Mars Reconnaissance Orbiter has returned several terabits of science data, sustaining a pace greater than any other deep space mission. This flood of data will require years of study to exploit their full value, forever increasing our understanding of Mars and its history of climate change," said Dr. Richard Zurek, project scientist for Mars Reconnaissance Orbiter at NASA's Jet Propulsion Laboratory, Pasadena, Calif.

Okubo and McEwen report the findings in the Feb. 16 edition of the journal Science. Images showing the haloes along fractures are available at http://www.nasa.gov/mission_pages/MRO/news/20070215.html.