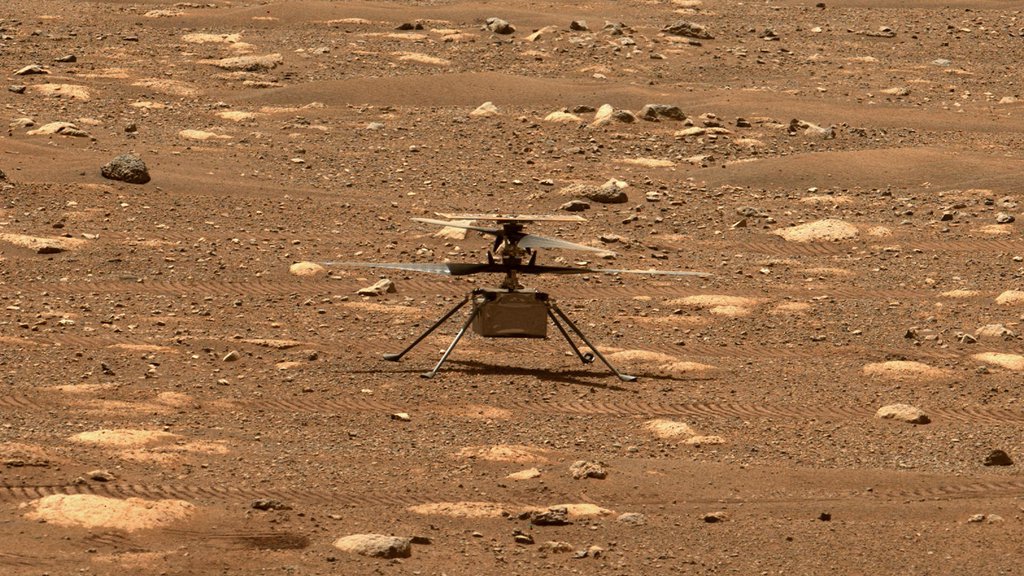 NASA’s Ingenuity helicopter unlocked its blades, allowing them to spin freely, on April 7, 2021, the 47th Martian day, or sol, of the mission. This image was captured by the Mastcam-Z imager aboard NASA’s Perseverance Mars rover on the following sol, April 8, 2021. Credit: NASA/JPL-Caltech Full Image Details

April 18, 2021, Update: Flight commands are being sent to NASA’s Ingenuity Mars Helicopter. Watch live on Monday, April 19 at 6:15 am EDT (3:15 a.m. PDT) as the team finds out if they’ve made history by achieving the first powered, controlled flight on another planet.

April 17, 2021, Update: The Ingenuity team has been testing two solutions to address the “watchdog” timer issue that prevented the helicopter from transitioning to “flight mode” and performing a high-speed spin test of the rotors on April 9. Read more in the blog. NASA is now targeting no earlier than Monday, April 19, for the helicopter’s first flight, at approximately 3:30 a.m. EDT (12:30 a.m. PDT). A livestream will begin at 6:15 a.m. EDT (3:15 a.m. PDT) as the helicopter team prepares to receive the data downlink in the Space Flight Operations Facility at JPL. Read more about the livestream and post-flight briefing here.

April 16, 2021, Update: Ingenuity has completed a full-speed spin test – an important milestone on the path to its first flight. The team is reviewing all data before making a decision about a potential flight attempt. Read more in the blog.

NASA’s Ingenuity Mars Helicopter is two days away from making humanity’s first attempt at powered, controlled flight of an aircraft on another planet. If all proceeds as planned, the 4-pound (1.8-kg) rotorcraft is expected to take off from Mars’ Jezero Crater Sunday, April 11, at 12:30 p.m. local Mars solar time (10:54 p.m. EDT, 7:54 p.m. PDT), hovering 10 feet (3 meters) above the surface for up to 30 seconds. Mission control specialists at NASA’s Jet Propulsion Laboratory in Southern California expect to receive the first data from the first flight attempt the following morning at around 4:15 a.m. EDT (1:15 a.m. PDT). NASA TV will air live coverage of the team as they receive the data, with commentary beginning at 3:30 a.m. EDT (12:30 a.m. PDT).

“While Ingenuity carries no science instruments, the little helicopter is already making its presence felt across the world, as future leaders follow its progress toward an unprecedented first flight,” said Thomas Zurbuchen, associate administrator for science at NASA Headquarters. “We do tech demos like this to push the envelope of our experience and provide something on which the next missions and the next generation can build. Just as Ingenuity was inspired by the Wright brothers, future explorers will take off using both the data and inspiration from this mission.”
The Mars Helicopter is a high-risk, high-reward technology demonstration. If Ingenuity were to encounter difficulties during its 30-sol (Martian day) mission, it would not impact the science gathering of NASA’s Perseverance Mars rover mission.

NASA’s Ingenuity helicopter does a slow spin test of its blades, on April 8, 2021, the 48th Martian day, or sol, of the mission. This image was captured by the Navigation Cameras on NASA’s Perseverance Mars rover. Credit: NASA/JPL-Caltech Full Image Details

Flying in a controlled manner on Mars is far more difficult than flying on Earth. Even though gravity on Mars is about one-third that of Earth’s, the helicopter must fly with the assistance of an atmosphere whose pressure at the surface is only 1% that of Earth. If successful, engineers will gain invaluable in-flight data at Mars for comparison to the modeling, simulations, and tests performed back here on Earth. NASA also will gain its first hands-on experience operating a rotorcraft remotely at Mars. These datasets will be invaluable for potential future Mars missions that could enlist next-generation helicopters to add an aerial dimension to their explorations.

“From day one of this project our team has had to overcome a wide array of seemingly insurmountable technical challenges,” said MiMi Aung, Ingenuity project manager at JPL. “And here we are – safely on Mars – on the eve of our first flight attempt. We got this far with a never-say-die attitude, a lot of friends from many different technical disciplines, and an agency that likes to turn far-out ideas into reality.”

“Mars is hard not only when you land, but when you try to take off from it and fly around, too.”

Anatomy of a First Flight

Sunday’s flight will be autonomous, with Ingenuity’s guidance, navigation, and control systems doing the piloting. That’s mostly because radio signals will take 15 minutes, 27 seconds to bridge the 173-million-mile (278-million-kilometer) gap between Mars and Earth. It’s also because just about everything about the Red Planet is demanding.

“Mars is hard not only when you land, but when you try to take off from it and fly around, too,” said Aung. “It has significantly less gravity, but less than 1% the pressure of our atmosphere at its surface. Put those things together, and you have a vehicle that demands every input be right.”

Events leading up to the first flight test begin when the Perseverance rover, which serves as a communications base station for Ingenuity, receives that day’s instructions from Earth. Those commands will have traveled from mission controllers at JPL through NASA’s Deep Space Network to a receiving antenna aboard Perseverance. Parked at “Van Zyl Overlook,” some 215 feet (65 meters) away, the rover will transmit the commands to the helicopter about an hour later.

Then, at 10:53 p.m. EDT (7:53 p.m. PDT), Ingenuity will begin undergoing its myriad preflight checks. The helicopter will repeat the blade-wiggle test it performed three sols prior. If the algorithms running the guidance, navigation, and control systems deem the test results acceptable, they will turn on the inertial measurement unit (an electronic device that measures a vehicle’s orientation and rotation) and inclinometer (which measures slopes). If everything checks out, the helicopter will again adjust the pitch of its rotor blades, configuring them so they don’t produce lift during the early portion of the spin-up.

The spin-up of the rotor blades will take about 12 seconds to go from 0 to 2,537 rpm, the optimal speed for the first flight. After a final systems check, the pitch of the rotor blades will be commanded to change yet again – this time so they can dig into those few molecules of carbon dioxide, nitrogen, and argon available in the atmosphere near the Martian surface. Moments later, the first experimental flight test on another planet will begin.

“It should take us about six seconds to climb to our maximum height for this first flight,” said JPL’s Håvard Grip, the flight control lead for Ingenuity. “When we hit 10 feet, Ingenuity will go into a hover that should last – if all goes well – for about 30 seconds.”

While hovering, the helicopter’s navigation camera and laser altimeter will feed information into the navigation computer to ensure Ingenuity remains not only level, but in the middle of its 33-by-33-foot (10-by-10-meter) airfield – a patch of Martian real estate chosen for its flatness and lack of obstructions. Then, the Mars Helicopter will descend and touch back down on the surface of Jezero Crater, sending data back to Earth, via Perseverance, to confirm the flight.

Perseverance is expected to obtain imagery of the flight using its Navcam and Mastcam-Z imagers, with the pictures expected to come down that evening (early morning Monday, April 12, in Southern California). The helicopter will also document the flight from its perspective, with a color image and several lower-resolution black-and-white navigation pictures possibly being available by the next morning.

“The Wright brothers only had a handful of eyewitnesses to their first flight, but the historic moment was thankfully captured in a great photograph,” said Michael Watkins, director of JPL. “Now 117 years later, we are able to provide a wonderful opportunity to share the results of the first attempt at powered, controlled flight on another world via our robotic photographers on Mars.”