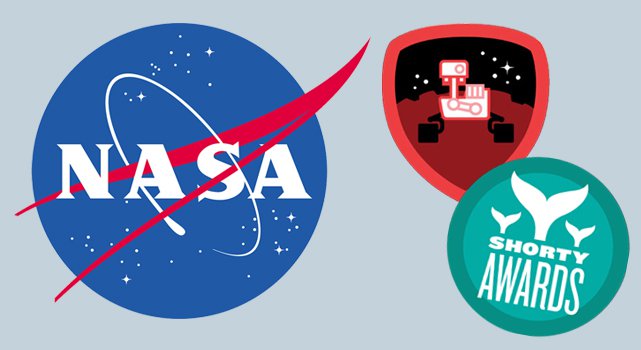 NASA's official Twitter feed, @NASA, has won its second consecutive Shorty award for the best government use of social media.

The Shorty Award honors the best of social media across sites such as Twitter, Facebook, Tumblr, YouTube, Foursquare and others. NASA took the prize Monday at the fifth annual Shorty Awards ceremony in New York.

"Our success stems from inspiring content that connects with people," said David Weaver, NASA's associate administrator for communications. "Our story of science and innovation resonates with everyone. Social media enables us to reach people directly like never before."

The Shorty Awards also recognized NASA's @MarsCuriosity account, managed by the Jet Propulsion Laboratory in Pasadena, Calif., as Foursquare Mayor of the Year. Curiosity, a robotic rover, has been using the mobile application Foursquare since October 2012 to check in at locations it has been exploring on Mars. Users on Foursquare can keep up with Curiosity as it checks in at key locations and posts photos and tips.

Including Monday's two awards and last year's Twitter account recognition, NASA now has five Shorty Awards. The agency also won in 2009 for its use of Twitter for the Mars Phoenix Lander mission, also managed by JPL, and astronaut Doug Wheelock was awarded the Real Time Photo of the Year in 2011 for his "Moon from Space" picture.

NASA uses almost 500 social media accounts to communicate its mission to a wide range of followers. The @NASA Twitter account has 3.8 million followers, the most in the federal government. NASA also maintains presences on Facebook, Google+, Flickr and other popular platforms. NASA Socials, formerly known as NASA Tweetups, allow social media followers to attend functions and interact with NASA's engineers, astronauts and scientists.

For more information about the Shorty Awards: http://shortyawards.com .

To view all of NASA's social media sites, visit: http://www.nasa.gov/connect .

The Curiosity Mars rover, carrying 10 science instruments, landed seven months ago to begin its two-year prime mission. JPL, a division of the California Institute of Technology in Pasadena, manages the project for NASA's Science Mission Directorate in Washington. For more about the mission, visit: http://www.nasa.gov/msl .