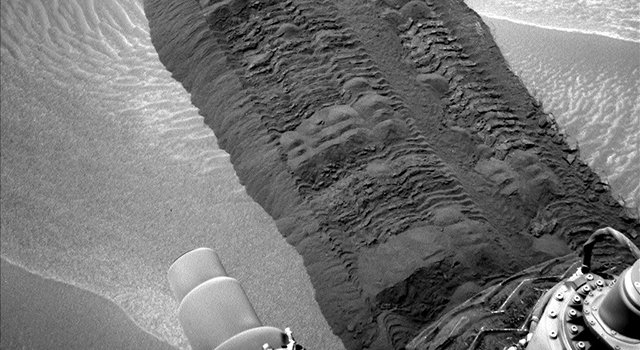 This image from the Navigation Camera on NASA's Curiosity Mars rover shows wheel tracks printed by the rover as it drove on the sandy floor of a lowland called "Hidden Valley" on the route toward Mount Sharp. The image was taken on Aug. 4, 2014. › Full image and caption 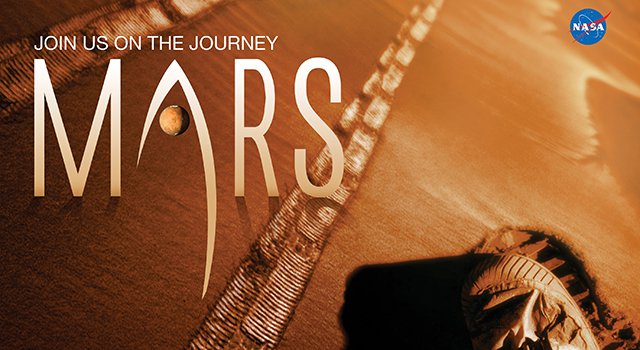 During its first year of operations, the Curiosity rover fulfilled its major science goal of determining whether Mars ever offered environmental conditions favorable for microbial life. Clay-bearing sedimentary rocks on the crater floor in an area called Yellowknife Bay yielded evidence of a lakebed environment billions of years ago that offered fresh water, all of the key elemental ingredients for life, and a chemical source of energy for microbes, if any existed there.

"Before landing, we expected that we would need to drive much farther before answering that habitability question," said Curiosity Project Scientist John Grotzinger of the California Institute of Technology, Pasadena. "We were able to take advantage of landing very close to an ancient streambed and lake. Now we want to learn more about how environmental conditions on Mars evolved, and we know where to go to do that."

During its second year, Curiosity has been driving toward long-term science destinations on lower slopes of Mount Sharp. Those destinations are in an area beginning about 2 miles (3 kilometers) southwest of the rover's current location, but an appetizer outcrop of a base layer of the mountain lies much closer -- less than one-third of a mile (500 meters) from Curiosity. The rover team is calling the outcrop "Pahrump Hills."

For about half of July, the rover team at NASA's Jet Propulsion Laboratory in Pasadena, California, drove Curiosity across an area of hazardous sharp rocks on Mars called "Zabriskie Plateau." Damage to Curiosity's aluminum wheels from driving across similar terrain last year prompted a change in route, with the plan of skirting such rock-studded terrain wherever feasible. The one-eighth mile (200 meters) across Zabriskie Plateau was one of the longest stretches without a suitable detour on the redesigned route toward the long-term science destination.

Another recent challenge appeared last week in the form of unexpected behavior by an onboard computer currently serving as backup. Curiosity carries duplicate main computers. It has been operating on its B-side computer since a problem with the A-side computer prompted the team to command a side swap in February 2013. Work in subsequent weeks of 2013 restored availability of the A-side as a backup in case of B-side trouble. In July, fresh commanding of the rover was suspended for two days while engineers confirmed that the A-side computer remains reliable as a backup.

To help prepare for future human missions to Mars, Curiosity incudes a radiation detector to measure the environment astronauts will encounter on a round-trip between Earth and the Martian surface. The data are consistent with earlier predictions and will help NASA scientists and engineers develop new technologies to protect astronauts in deep space.

Additionally, NASA recently announced that its next rover going to Mars in 2020 will carry seven carefully selected instruments to conduct unprecedented investigations in science and technology, as well as capabilities needed for humans to pioneer the Red Planet.

Based on the design of the highly successful Mars Science Laboratory rover, Curiosity, the new rover will carry more sophisticated, upgraded hardware and new instruments to conduct geological assessments of the rover's landing site, determine the potential habitability of the environment, and directly search for signs of ancient Martian life.

The Mars 2020 rover will help further advance our knowledge of how future human explorers could use natural resources available on the surface of the Red Planet. An ability to live off the Martian land would transform future exploration of the planet. Designers of future human expeditions can use this mission to understand the hazards posed by Martian dust and demonstrate technology to process carbon dioxide from the atmosphere to produce oxygen. These experiments will help engineers learn how to use Martian resources to produce oxygen for human respiration and potentially as an oxidizer for rocket fuel.

The Mars 2020 rover is part of the agency's Mars Exploration Program, which includes the Opportunity and Curiosity rovers, the Odyssey and Mars Reconnaissance Orbiter spacecraft currently orbiting the planet, and the MAVEN orbiter, which is set to arrive at the Red Planet in September and will study the Martian upper atmosphere.

NASA's Mars Exploration Program seeks to characterize and understand Mars as a dynamic system, including its present and past environment, climate cycles, geology and biological potential. In parallel, NASA is developing the human spaceflight capabilities needed for future round-trip missions to Mars.

Follow our progress on NASA's Journey to Mars at: