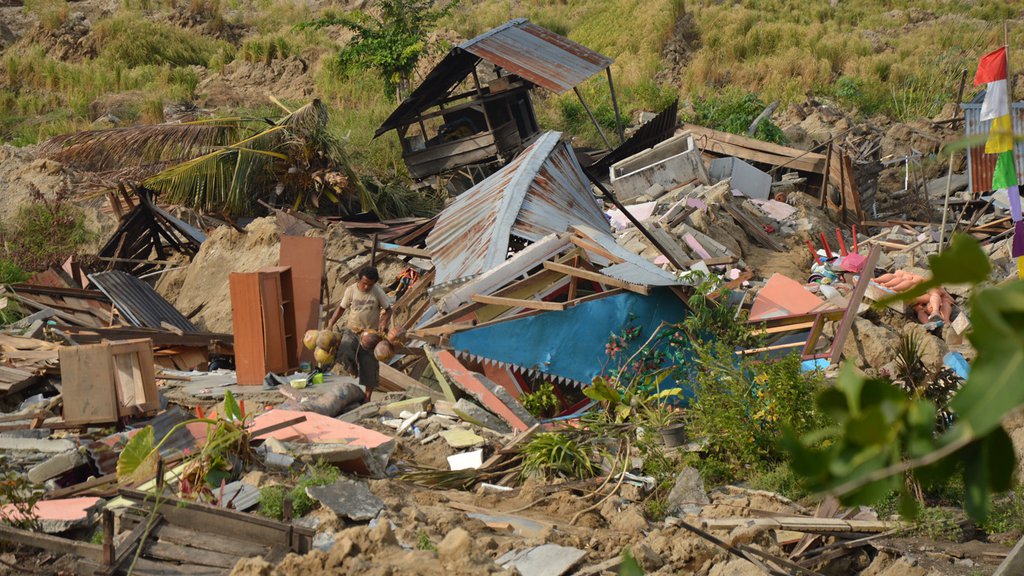 A man retrieving coconuts from a home destroyed by landslides, with damaged rice paddies in the background. European Union/Pierre Prakash
Credit: , CC BY-NC-ND 2.0

A new study identifies intensive rice irrigation - never before known to be a risk factor - as the cause of deadly mud landslides during Indonesia's major 2018 earthquake.

In the deadly 2018 earthquake in the Indonesian city of Palu, intense shaking changed solid ground into a landslide of flowing mud, multiplying the death toll and economic impact. A new paper shows that this disastrous effect was triggered by a previously unknown risk factor: flooding rice fields for farming.

Soil liquefaction, which causes this kind of landslide, occurs when the shaking from a large earthquake rips through moist, loose soil, overpowering the friction that normally holds dirt particles together. The soil loses its structural integrity and begins to flow like a liquid. Buildings fall as their support washes away. Heavy objects like cars sink into the muck, while buried water and sewer pipes rise to the surface.

In Palu, although early reporting blamed most of the estimated 2,000 fatalities on a tsunami, surveys soon showed that soil-liquefaction landslides caused at least as much damage as the ocean waves did. That puzzled researchers. Soil liquefaction usually occurs in flat landscapes with wet, sandy or silty ground, such as coastal plains. Researchers had thought flat terrain was a prerequisite because the water table - the distance below ground where the soil becomes saturated with water - must be shallow, and that's rare on a hillside. Palu has sandy soil, but it's in a gently sloping valley that appeared to pose little risk. 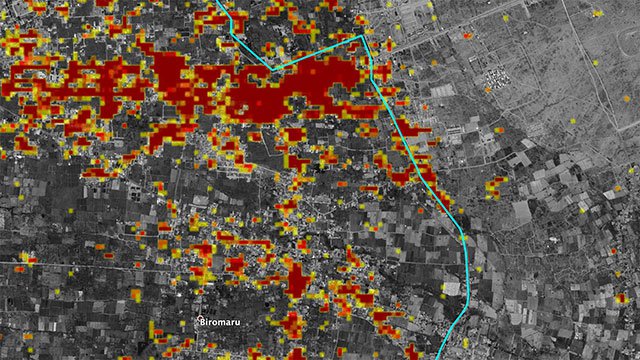 JPL's ARIA team produced this Damage Proxy Map of Palu after the 2018 earthquake. The aqueduct is marked in blue; red and yellow pixels show likely damage. The terrain slopes uphill from left to right, with major damage below the aqueduct and little above it. Credit: NASA/JPL-Caltech/JAXA
Larger view

They were startled to notice that all the landslides originated along a distinct line. When they took a closer look, they saw that the line was an aqueduct. "So we started studying why the aqueduct is clearly defining the boundary between land sliding and no sliding," Yun said.

The Gumbasa Aqueduct was completed in 1913 to reduce the risk of famine by providing a consistent water supply for local farmers. Only land downhill from the aqueduct is irrigated; water is not pumped uphill. Farmers just below the aqueduct practice wet rice cultivation, in which fields are flooded at one point in the growing cycle. This predominant method of rice farming in tropical Asia raises the water table over time to just below the ground surface. Farther downhill, farmers grow coconut palms, which require less irrigation and don't raise the water table as much.

Damage maps revealed widespread liquefaction below the aqueduct. Multiple slides carried some 6 square miles (16 square kilometers) of land far downhill - in some places farther than 49 feet (15 meters). The slides were slowed or halted by the coconut palm plantations. No liquefaction was identified uphill of the aqueduct.

The conclusion is clear, Bradley said: "If there hadn't been intensive irrigation, the landslides wouldn't have happened." On the positive side, he added, "This is a human-caused hazard, and it can have a human solution. We can't mitigate the hazard of ground shaking on Palu, but the agricultural practices can be updated based on this new understanding."

Trees played a critical role in stopping the slides, and the researchers suggest that planting more trees - perhaps interspersed with rice fields - in areas that are intensively irrigated might reduce the risk of soil liquefaction.

Bradley noted that Palu is not the only place in the world where people are growing heavily irrigated crops on wet, sandy slopes. "If an engineer had gone to Palu and evaluated the system from first principles, they would likely have been able to identify this risk," he said. "I hope this study is an impetus for people to go and study these other places."

A paper on the research, titled "Wet rice cultivation was the primary cause of the earthquake-triggered Palu landslides," was published in Nature Geoscience. Bradley is the lead author.