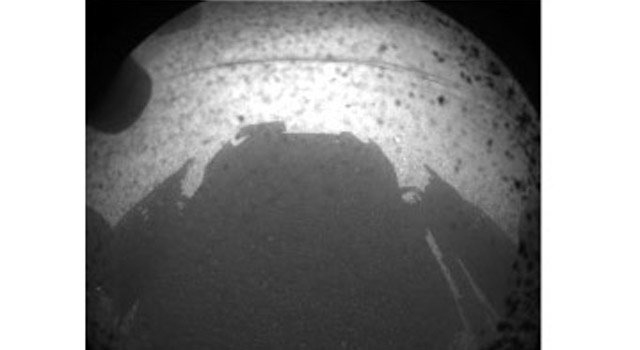 This is one of the first images taken by NASA's Curiosity rover, which landed on Mars the evening of Aug. 5 PDT (morning of Aug. 6 EDT).› Full image and caption
Credit: NASA/JPL-Caltech | 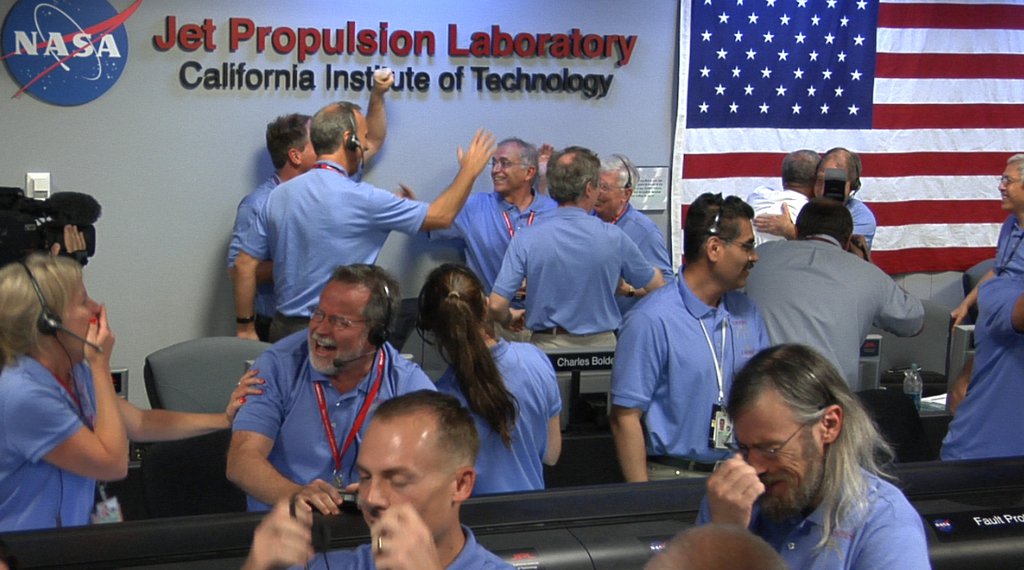 Engineers at NASA's Jet Propulsion Laboratory in Pasadena, Calif., celebrate the landing of NASA's Curiosity rover on the Red Planet. The rover touched down on Mars the evening of Aug. 5 PDT (morning of Aug. 6 EDT).› Full image and caption
Credit: NASA/JPL-Caltech

NASA's most advanced Mars rover Curiosity has landed on the Red Planet.

PASADENA, Calif. -- NASA's most advanced Mars rover Curiosity has landed on the Red Planet. The one-ton rover, hanging by ropes from a rocket backpack, touched down onto Mars Sunday to end a 36-week flight and begin a two-year investigation.

The Mars Science Laboratory (MSL) spacecraft that carried Curiosity succeeded in every step of the most complex landing ever attempted on Mars, including the final severing of the bridle cords and flyaway maneuver of the rocket backpack.

"Today, the wheels of Curiosity have begun to blaze the trail for human footprints on Mars.  Curiosity, the most sophisticated rover ever built, is now on the surface of the Red Planet, where it will seek to answer age-old questions about whether life ever existed on Mars -- or if the planet can sustain life in the future," said NASA Administrator Charles Bolden. "This is an amazing achievement, made possible by a team of scientists and engineers from around the world and led by the extraordinary men and women of NASA and our Jet Propulsion Laboratory. President Obama has laid out a bold vision for sending humans to Mars in the mid-2030's, and today's landing marks a significant step toward achieving this goal."

Curiosity landed at 10:32 p.m. Aug. 5, PDT, (1:32 a.m. EDT Aug. 6) near the foot of a mountain three miles tall and 96 miles in diameter inside Gale Crater. During a nearly two-year prime mission, the rover will investigate whether the region ever offered conditions favorable for microbial life.

"The Seven Minutes of Terror has turned into the Seven Minutes of Triumph," said NASA Associate Administrator for Science John Grunsfeld. "My immense joy in the success of this mission is matched only by overwhelming pride I feel for the women and men of the mission's team."

Curiosity returned its first view of Mars, a wide-angle scene of rocky ground near the front of the rover. More images are anticipated in the next several days as the mission blends observations of the landing site with activities to configure the rover for work and check the performance of its instruments and mechanisms.

"Our Curiosity is talking to us from the surface of Mars," said MSL Project Manager Peter Theisinger of NASA's Jet Propulsion Laboratory in Pasadena, Calif. "The landing takes us past the most hazardous moments for this project, and begins a new and exciting mission to pursue its scientific objectives."

Curiosity carries 10 science instruments with a total mass 15 times as large as the science payloads on the Mars rovers Spirit and Opportunity. Some of the tools are the first of their kind on Mars, such as a laser-firing instrument for checking elemental composition of rocks from a distance. The rover will use a drill and scoop at the end of its robotic arm to gather soil and powdered samples of rock interiors, then sieve and parcel out these samples into analytical laboratory instruments inside the rover.

The mission is managed by JPL for NASA's Science Mission Directorate in Washington. The rover was designed, developed and assembled at JPL. JPL is a division of the California Institute of Technology in Pasadena.

For more information on the mission, visit: http://www.nasa.gov/mars and http://marsprogram.jpl.nasa.gov/msl .