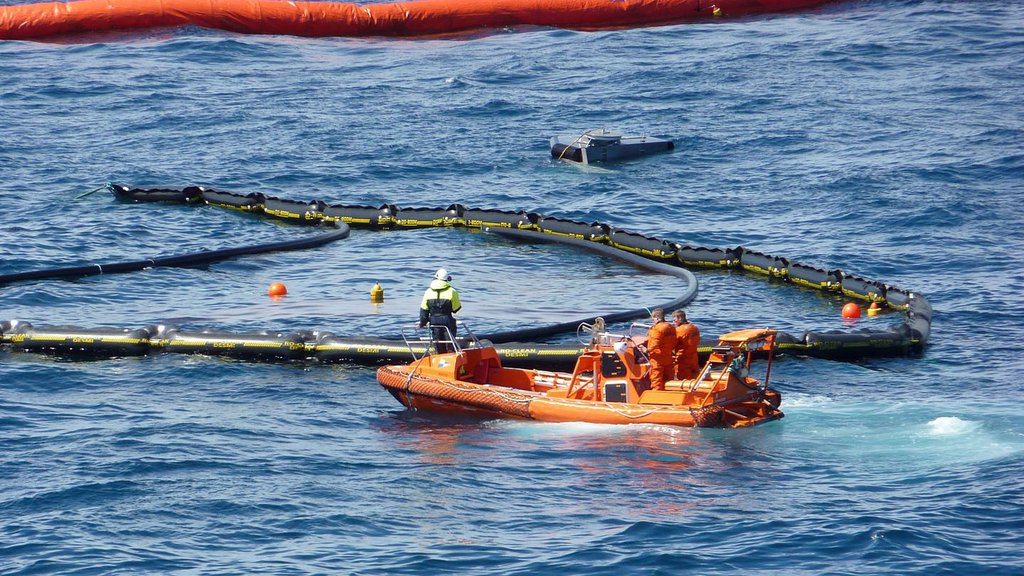 Norway's annual Oil on Water exercises allow personnel and equipment to hone their response to oil spills. In this photo from the 2010 exercise, a rescue boat checks the placement of booms by a fishing boat that participated in the cleanup drill. A boom is a floating barrier that fences in spilled oil.
Credit: NOFO 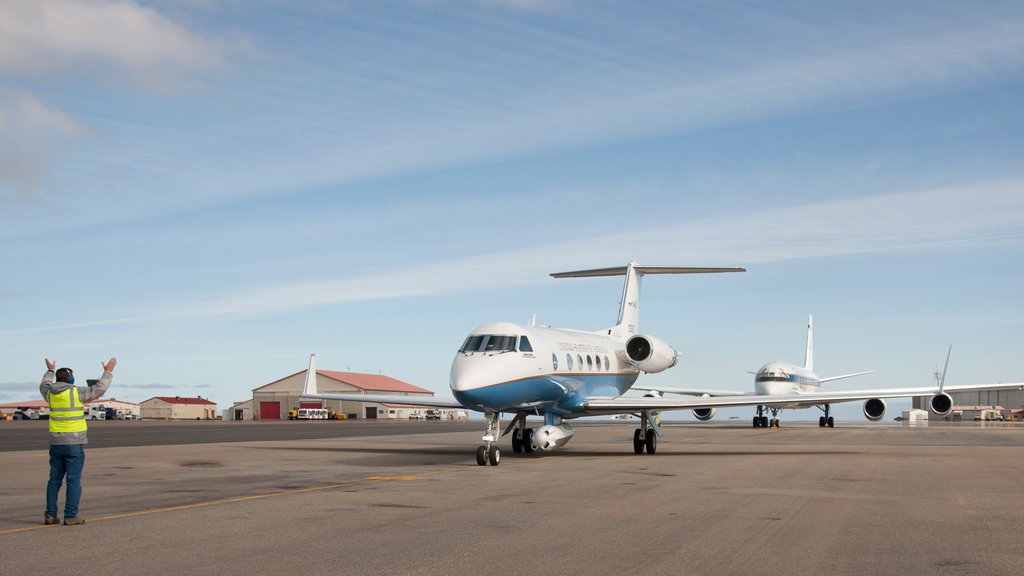 Shortly before its deployment in Norway, NASA's C-20A was in Iceland, where the UAVSAR instrument monitored changes in ice caps and volcanoes. This photo shows the aircraft being directed to a parking place, with another NASA research aircraft queued behind it. The UAVSAR is mounted in the white pod below the belly of the plane.
Credit: NASA

Norway's Oil on Water exercise has been held annually since the 1980s, weather and wildlife permitting. In these drills, oil is released onto the ocean and then recovered, giving responders experience with existing cleanup techniques and equipment and a chance to test new technologies.

"This year was special, because we had our own dedicated science experiment in the middle of the training exercise," said Camilla Brekke, associate professor in the Department of Physics and Technology at the University of Tromsø, Norway. Brekke invited scientists Cathleen Jones and Ben Holt from NASA's Jet Propulsion Laboratory, Pasadena, California, to participate in the experiment.

The two JPL researchers and Brent Minchew, a colleague from the California Institute of Technology, Pasadena (Caltech), recognized UAVSAR's potential to classify the oil in an oil slick during observations of the 2010 BP Deepwater Horizon spill in the Gulf of Mexico. But since they had only estimates of how much oil was released in the disaster and of the rate of flow, they could not fully check UAVSAR's accuracy. The Norwegian study gave them the chance to do just that.

"Radar has long been thought to be useful only for telling where oil is present," said Jones. "That information is important, but it's not all that's needed to direct the response to an oil spill."

The same accident can create both sheens of oil a few hundredths of an inch thick and heavy, sticky emulsions of oil and seawater, depending on factors such as the weather and length of time since the spill. "Thick emulsions hang around in the environment much longer than a sheen does," Jones explained. "They're more likely to make it to shore to contaminate coastal and tidal zones and to oil sea animals. If we can identify where that high-environmental-impact oil is, cleanup crews can get the most out of the time and people they have."

Radars "see" an oil spill because of a characteristic that the Greek philosopher Aristotle first wrote about 2,500 years ago: pouring oil on water smooths the surface. To an observer, returning radar signals -- called backscatter -- from a smooth, oily sea surface look darker than backscatter from a normal sea surface with small, bumpy waves.

During their observations of the Gulf oil spill, the NASA scientists discovered that the extremely sensitive UAVSAR could also detect another characteristic of oil: compared with seawater, it is a very poor conductor of electricity. Radar waves are reflected well by materials with good electrical conductivity, such as seawater, and not so well by poor conductors like oil. For that reason, the strength of the backscatter from different parts of an oil slick is related to the thickness of the emulsion in each part.

The Norwegian exercise released emulsions of differing thicknesses so that the scientists could have a range of conditions to calibrate the UAVSAR data. The experiment also tested the instrument's ability to distinguish between petroleum and plant-based oil, found in algal blooms. "In the Baltic Sea you will see plenty of these, and they look like oil slicks from [radar on] a satellite," Brekke said.

Norway is one of a few nations worldwide that allow oil to be discharged at sea to test new cleanup technologies and procedures. The Norwegian Clean Seas Association for Operating Companies runs the Oil on Water exercise -- as well as more than 100 other annual drills in which no oil is released -- to keep its personnel and ships ready to respond to an emergency. This year, Oil on Water was held at the abandoned Frigg Oilfield, about 140 miles (230 kilometers) northwest of Stavanger, Norway.

UAVSAR was originally designed to fly on uninhabited aerial vehicles (UAVs), but currently it flies on in a pod mounted beneath a NASA C-20A piloted aircraft, a version of the Gulfstream III business jet, based at NASA's Armstrong Flight Research Center in Palmdale, California.

NASA uses the vantage points of air and space to increase our understanding of our home planet, improve lives and safeguard our future. NASA develops new ways to observe and study Earth's interconnected natural systems with long-term data records. The agency freely shares this unique knowledge and works with institutions around the world to gain new insights into how our planet is changing.