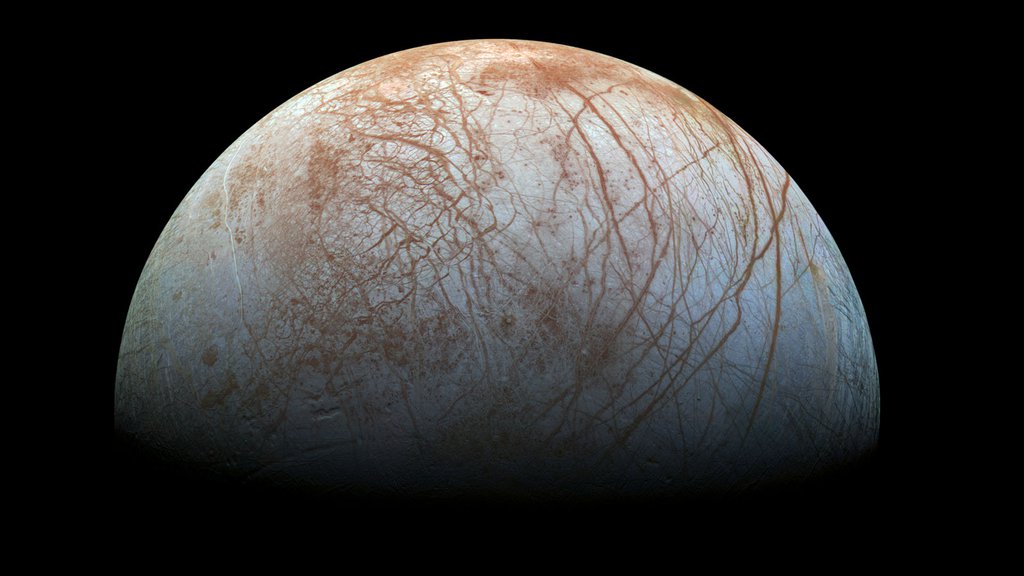 Scientists have produced a new version of what is perhaps NASA's best view of Jupiter's ice-covered moon, Europa.

Scientists have produced a new version of what is perhaps NASA's best view of Jupiter's ice-covered moon, Europa. The mosaic of color images was obtained in the late 1990s by NASA's Galileo spacecraft. This is the first time that NASA is publishing a version of the scene produced using modern image processing techniques.

This view of Europa stands out as the color view that shows the largest portion of the moon's surface at the highest resolution.

An earlier, lower-resolution version of the view, published in 2001, featured colors that had been strongly enhanced. The new image more closely approximates what the human eye would see. Space imaging enthusiasts have produced their own versions of the view using the publicly available data, but NASA has not previously issued its own rendition using near-natural color.

The image features many long, curving and linear fractures in the moon's bright ice shell. Scientists are eager to learn if the reddish-brown fractures, and other markings spattered across the surface, contain clues about the geological history of Europa and the chemistry of the global ocean that is thought to exist beneath the ice.

In addition to the newly processed image, a new video details why this likely ocean world is a high priority for future exploration.

Hidden beneath Europa's icy surface is perhaps the most promising place in our solar system beyond Earth to look for present-day environments that are suitable for life. The Galileo mission found strong evidence that a subsurface ocean of salty water is in contact with a rocky seafloor. The cycling of material between the ocean and ice shell could potentially provide sources of chemical energy that could sustain simple life forms.

More information about Europa is available at: