NASA Invites the Public to Fly Along with Voyager 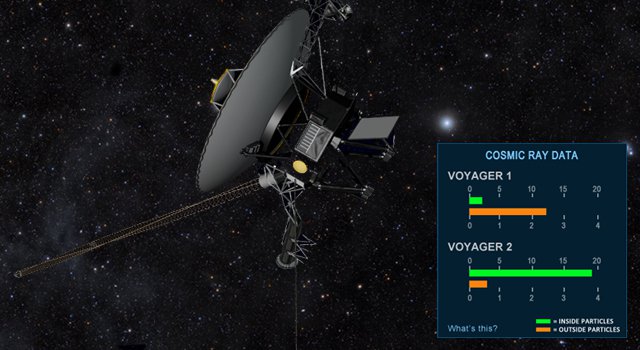 The public will be able to fly along with NASA's Voyager spacecraft as the twin probes head towards interstellar space, which is the space between stars. As indicated in this artist's concept, a regularly updated gauge using data from the two spacecraft will indicate the levels of particles that originate from far outside our solar system and those that originate from inside our solar bubble. Those are two of the three signs scientists expect to see in interstellar space. The other sign is a change in the direction of the magnetic field.
Credit: NASA/JPL-Caltech

NASA's twin Voyager spacecraft are on the verge of plunging into interstellar space -- the space between stars -- and two new Web tools let the public fly along.

A gauge on the Voyager home page, http://voyager.jpl.nasa.gov, tracks levels of two of the three key signs scientists believe will appear when the spacecraft leave our solar neighborhood and enter interstellar space.

When the three signs are verified, scientists will know that one of the Voyagers has hurtled beyond the magnetic bubble the sun blows around itself, which is known as the heliosphere.

Scientists then need only see a change in the direction of the magnetic field to confirm that the spacecraft has sailed beyond the breath of the solar wind and finally arrived into the vast cosmic ocean between stars. The direction of the magnetic field, however, requires periodic instrument calibrations and complicated analyses. These analyses typically take a few months to return after the charged particle data are received on Earth.

Voyager 1, the most distant human-made spacecraft, appears to have reached this last region before interstellar space, which scientists have called "the magnetic highway." Inside particles are zooming out and outside particles are zooming in. However, Voyager 1 has not yet seen a change in the direction of the magnetic field, so the consensus among the Voyager team is that it has not yet left the heliosphere.

Voyager 2, the longest-operating spacecraft, but not as distant as Voyager 1, does not yet appear to have reached the magnetic highway. The level of inside particles at Voyager 2 is still much higher than what has been seen with Voyager 1.

NASA's Eyes on the Solar System program, a Web-based, video-game-like tool to journey with NASA's spacecraft through the solar system, has added a Voyager module that takes viewers along for a ride with Voyager 1 as it explores the outer limits of the heliosphere. Time has been sped up to show one day per second. Rolls and other maneuvers are incorporated into the program, based on actual spacecraft navigation data. The charged particle data are also shown. Visit that module at: http://1.usa.gov/13uYqGP .

The Voyager spacecraft were built and continue to be operated by NASA's Jet Propulsion Laboratory, Pasadena, Calif. Caltech manages JPL for NASA. The Voyager missions are a part of NASA's Heliophysics System Observatory, sponsored by the Heliophysics Division of the Science Mission Directorate at NASA Headquarters in Washington.

For more information about the Voyager spacecraft, visit: http://www.nasa.gov/voyager and http://voyager.jpl.nasa.gov .