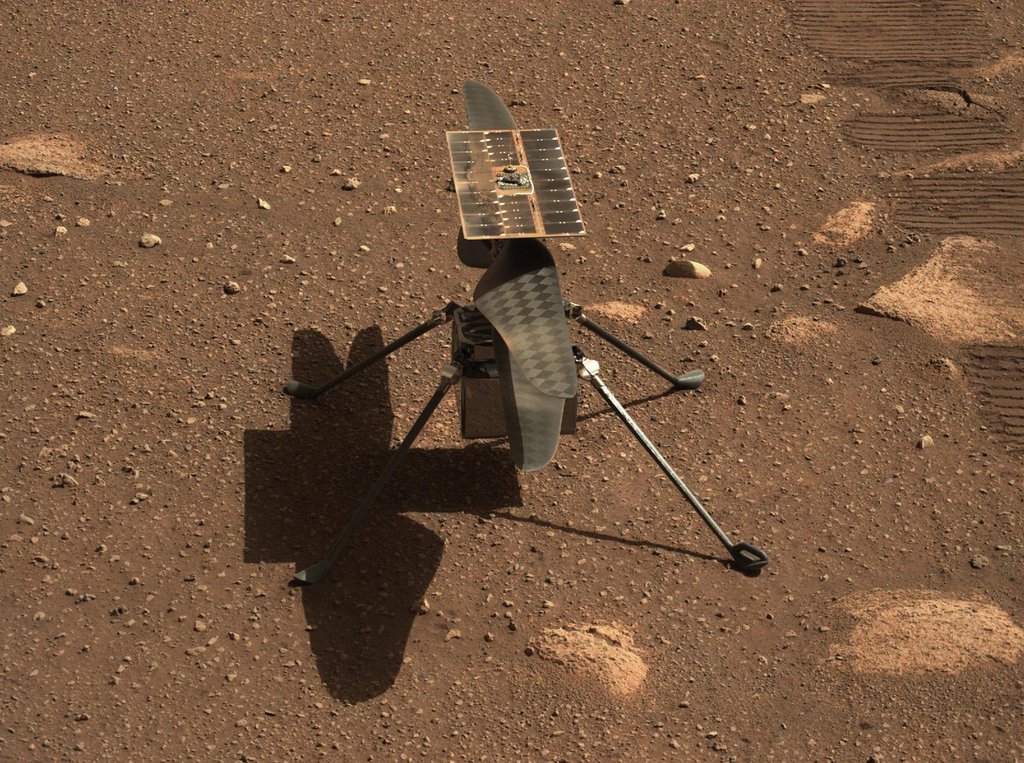 NASA's Ingenuity Mars helicopter is seen here in a close-up taken by Mastcam-Z, a pair of zoomable cameras aboard the Perseverance rover. This image was taken on April 5, the 45th Martian day, or sol, of the mission.
Credit: NASA/JPL-Caltech/ASU
Full Image Details

NASA is targeting no earlier than Sunday, April 11, for Ingenuity Mars helicopter’s first attempt at powered, controlled flight on another planet. To mark a month of Ingenuity flights, the agency will host several events to bring people along for the ride.

A livestream confirming Ingenuity’s first flight is targeted to begin around 3:30 a.m. EDT Monday, April 12, on NASA Television, the NASA app, and the agency’s website, and will livestream on multiple agency social media platforms, including the JPL YouTube and Facebook channels.

Ingenuity arrived at Mars’ Jezero Crater Feb. 18, attached to the belly of NASA’s Perseverance rover. The helicopter is a technology demonstration with a planned test flight duration of up to 31 days (30 Mars days, or sols). The rover will provide support during flight operations, taking images, collecting environmental data, and hosting the base station that enables the helicopter to communicate with mission controllers on Earth.

The flight date may shift as engineers work on the deployments, preflight checks, and vehicle positioning of both Perseverance and Ingenuity. Timing for events will be updated as needed, and the latest schedule will be available on the helicopter’s Watch Online webpage:

Virtual media briefings before and after Ingenuity’s first flight attempt and the livestream coverage of the flight attempt will originate from NASA’s Jet Propulsion Laboratory in Southern California.

A preflight briefing at 1 p.m. EDT (10 a.m. PDT) Friday, April 9, will provide the latest details on the helicopter’s operations and what to expect on the first flight day.

Briefing participants are expected to include:

The public may ask questions on social media during the briefings and livestream using #MarsHelicopter.

On Thursday, April 8, at 1 p.m. EDT (10 a.m. PDT), students can watch a special conversation with members of the rover and helicopter teams on the NASA-JPL Edu YouTube channel and NASA TV.

A series of informal talks, titled, “Taking Flight: How Girls Can Grow Up to Be Engineers,” will take place Thursday, April 15; Thursday, April 22; and Thursday, April 29; at 4 p.m. EDT (1 p.m. PDT) each day, with exact dates and times based on Ingenuity’s first flight. The talks will focus on helping girls chart a path to engineering and provide invitations to special events for girls and women interested in the field.

NASA’s Ingenuity Mars Helicopter technology demonstration is supported by NASA’s Science, Aeronautics Research, and Space Technology mission directorates. JPL, which is managed for NASA by Caltech in Pasadena, California, built and manages operations for Ingenuity and the Mars 2020 Perseverance rover.

An Ingenuity press kit, with more information about the helicopter, is available at:

To learn more about Ingenuity, visit:

To learn more about Perseverance, visit: