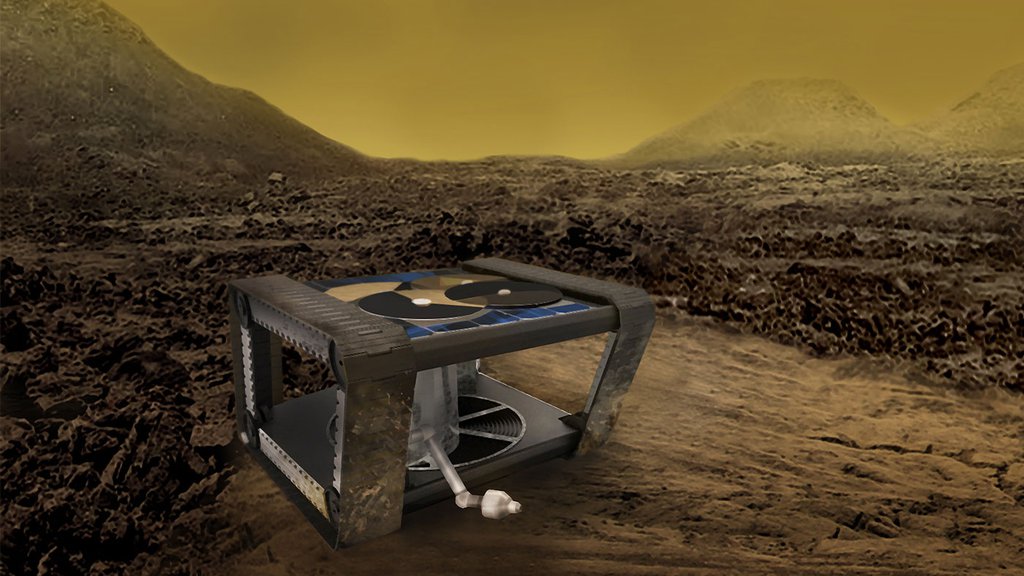 JPL's AREE rover for Venus is just one of the concepts selected by NASA for further research funding.
Credit: NASA/JPL-Caltech

JPL provided five of the 22 concepts selected by NASA for further study.

A mechanical rover inspired by a Dutch artist. A weather balloon that recharges its batteries in the clouds of Venus.

These are just two of the five ideas that originated at NASA's Jet Propulsion Laboratory in Pasadena, California, and are advancing for a new round of research funded by the agency.

In total, the space agency is investing in 22 early-stage technology proposals that have the potential to transform future human and robotic exploration missions, introduce new exploration capabilities, and significantly improve current approaches to building and operating aerospace systems.

The 2017 NASA Innovative Advanced Concepts (NIAC) portfolio of Phase I concepts covers a wide range of innovations selected for their potential to revolutionize future space exploration. Phase I awards are valued at approximately $125,000, for nine months, to support initial definition and analysis of their concepts. If these basic feasibility studies are successful, awardees can apply for Phase II awards.

"The NIAC program engages researchers and innovators in the scientific and engineering communities, including agency civil servants," said Steve Jurczyk, associate administrator of NASA's Space Technology Mission Directorate. "The program gives fellows the opportunity and funding to explore visionary aerospace concepts that we appraise and potentially fold into our early stage technology portfolio."

The selected 2017 Phase I proposals are:

"The 2017 NIAC Phase I competition has resulted in an excellent set of studies. All of the final candidates were outstanding," said Jason Derleth, NIAC program executive. "We look forward to seeing how each new study will expand how we explore the universe."

Phase II studies allow awardees time to refine their designs and explore aspects of implementing the new technology. This year's Phase II portfolio addresses a range of leading-edge concepts, including: a Venus probe using in-situ power and propulsion to study the Venusian atmosphere, and novel orbital imaging data derived from stellar echo techniques -- measurement of the variation in a star's light caused by reflections off of distant worlds -- to detect exoplanets, which are planets outside our solar system.

Awards under Phase II of the NIAC program can be worth as much as $500,000, for two-year studies, and allow proposers to further develop Phase I concepts that successfully demonstrated initial feasibility and benefit.

The selected 2017 Phase II proposals are:

"Phase II studies can accomplish a great deal in their two years with NIAC. It is always wonderful to see how our Fellows plan to excel," said Derleth. "The 2017 NIAC Phase II studies are exciting, and it is wonderful to be able to welcome these innovators back in to the program. Hopefully, they will all go on to do what NIAC does best -- change the possible."

NIAC partners with forward-thinking scientists, engineers, and citizen inventors from across the nation to help maintain America's leadership in air and space. NIAC is funded by NASA's Space Technology Mission Directorate, which is responsible for developing the cross-cutting, pioneering, new technologies and capabilities needed by the agency to achieve its current and future missions.

For more information about NIAC and a complete list of the selected proposals, visit: