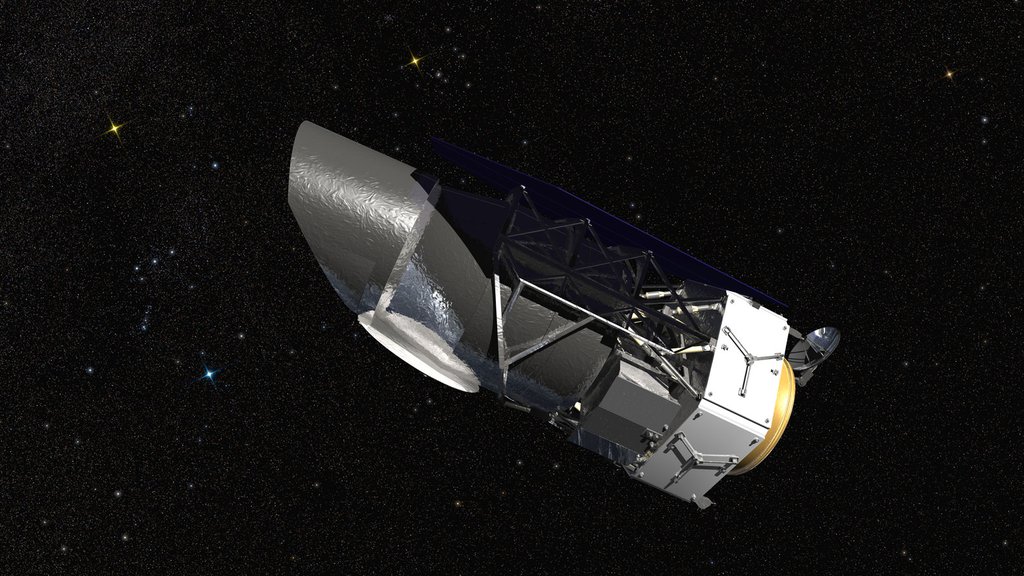 WFIRST, the Wide Field Infrared Survey Telescope, is shown here in an artist's rendering. It will carry a Wide Field Instrument to provide astronomers with Hubble-quality images covering large swaths of the sky, and enabling several studies of cosmic evolution. › Full image and caption

NASA is formally starting an astrophysics mission designed to help unlock the secrets of the universe -- the Wide Field Infrared Survey Telescope (WFIRST).

After years of preparatory studies, NASA is formally starting an astrophysics mission designed to help unlock the secrets of the universe -- the Wide Field Infrared Survey Telescope (WFIRST).

With a view 100 times bigger than that of NASA's Hubble Space Telescope, WFIRST will aid researchers in their efforts to unravel the secrets of dark energy and dark matter, and explore the evolution of the cosmos. It also will discover new worlds outside our solar system and advance the search for worlds that could be suitable for life.

NASA's Agency Program Management Council, which evaluates the agency's programs and projects on content, risk management and performance, made the decision to move forward with the mission on Wednesday.

The mission is led by NASA's Goddard Space Flight Center in Greenbelt, Maryland. NASA's Jet Propulsion Laboratory in Pasadena, California, will manage the mission's 7.8-foot (2.4-meter) telescope and deliver the coronagraph, an instrument to help image and characterize planets around other stars. The Infrared Processing and Analysis Center (IPAC) at the California Institute of Technology in Pasadena will share science center activities with the Space Telescope Science Institute in Baltimore, under Goddard leadership.

"WFIRST has the potential to open our eyes to the wonders of the universe, much the same way Hubble has," said John Grunsfeld, astronaut and associate administrator of NASA's Science Mission Directorate at Headquarters in Washington. "This mission uniquely combines the ability to discover and characterize planets beyond our own solar system with the sensitivity and optics to look wide and deep into the universe in a quest to unravel the mysteries of dark energy and dark matter."

WFIRST is the agency's next major astrophysics observatory, following the launch of the James Webb Space Telescope in 2018. The WFIRST observatory will survey large regions of the sky in near-infrared light to answer fundamental questions about the structure and evolution of the universe, and expand our knowledge of planets beyond our solar system - known as exoplanets.

It will carry a Wide Field Instrument for surveys, and a Coronagraph Instrument designed to block the glare of individual stars and reveal the faint light of planets orbiting around them. By blocking the light of the host star, the Coronagraph Instrument will enable detailed measurements of the chemical makeup of planetary atmospheres. Comparing these data across many worlds will allow scientists to better understand the origin and physics of these atmospheres, and search for chemical signs of environments suitable for life.

"WFIRST is designed to address science areas identified as top priorities by the astronomical community," said Paul Hertz, director of NASA's Astrophysics Division in Washington. "The Wide-Field Instrument will give the telescope the ability to capture a single image with the depth and quality of Hubble, but covering 100 times the area. The coronagraph will provide revolutionary science, capturing the faint, but direct images of distant gaseous worlds and super-Earths."

The telescope's sensitivity and wide view will enable a large-scale search for exoplanets by monitoring the brightness of millions of stars in the crowded central region of our galaxy. The survey will net thousands of new exoplanets similar in size and distance from their star as those in our own solar system, complementing the work started by NASA's Kepler mission and the upcoming work of the Transiting Exoplanet Survey Satellite.

Employing multiple techniques, astronomers also will use WFIRST to track how dark energy and dark matter have affected the evolution of our universe. Dark energy is a mysterious, negative pressure that has been speeding up the expansion of the universe. Dark matter is invisible material that makes up most of the matter in our universe.

By measuring the distances of thousands of supernovae, astronomers can map in detail how cosmic expansion has increased with time. WFIRST also can precisely measure the shapes, positions and distances of millions of galaxies to track the distribution and growth of cosmic structures, including galaxy clusters and the dark matter accompanying them.

"In addition to its exciting capabilities for dark energy and exoplanets, WFIRST will provide a treasure trove of exquisite data for all astronomers," said Neil Gehrels, WFIRST project scientist at NASA's Goddard Space Flight Center in Greenbelt, Maryland. "This mission will survey the universe to find the most interesting objects out there."

Twelve science investigation teams were recently selected by NASA to help optimize science returns for the mission. Olivier Doré of JPL leads one of the teams. His group will focus on cosmology and the best methods for WFIRST to measure and test the nature of dark energy.

WFIRST is slated to launch in the mid-2020s. The observatory will begin operations after travelling to a gravitational balance point known as Earth-sun L2, which is located about one million miles from Earth in a direction directly opposite the sun.