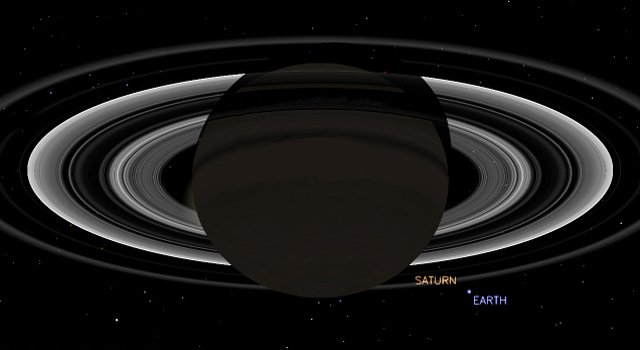 This simulated view from NASA's Cassini spacecraft shows the expected positions of Saturn and Earth on July 19, 2013, around the time Cassini will take Earth's picture. Cassini will be about 898 million miles (1.44 billion kilometers) away from Earth at the time. That distance is nearly 10 times the distance from the sun to Earth.
Credit: NASA/JPL-Caltech 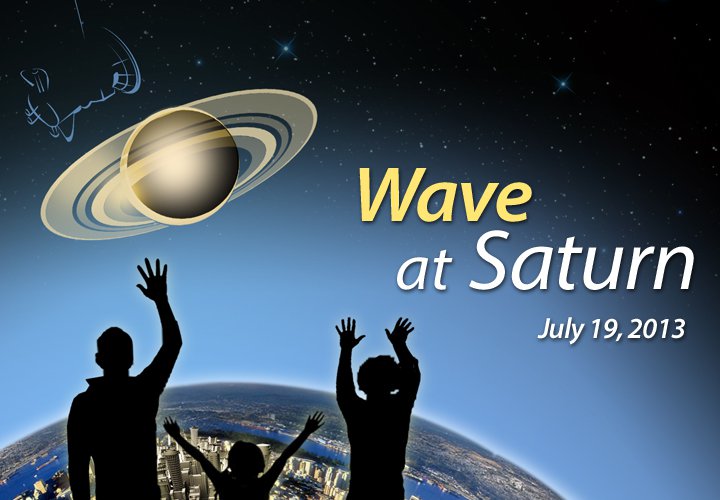 On July 19, 2013, NASA's Cassini spacecraft will take a picture of Earth from about 898 million (1.44 billion kilometers) away, or nearly 10 times the distance between Earth and the sun. It will be the first time Earthlings have had advance notice that their picture will be taken from interplanetary distances. To learn more about how to participate, visit .http://saturn.jpl.nasa.gov/waveatsaturn
Credit: NASA/JPL-Caltech

NASA's Cassini spacecraft created this panoramic view of the Saturn system, with Earth appearing as a pale blue dot, in 2006.› Full image and caption
Credit: NASA/JPL-Caltech

Two NASA spacecraft, one studying the Saturn system, the other observing Mercury, are maneuvering into place to take pictures of Earth on July 19 and 20.

PASADENA, Calif. -- Two NASA spacecraft, one studying the Saturn system, the other observing Mercury, are maneuvering into place to take pictures of Earth on July 19 and 20.

The image taken from the Saturn system by NASA's Cassini spacecraft will occur between 2:27 and 2:42 PDT (5:27 and 5:42 p.m. EDT, or 21:27 and 21:42 UTC) Friday, July 19. Cassini will be nearly 900 million miles (nearly 1.5 billion kilometers) away from Earth. NASA is encouraging the public to look and wave in the direction of Saturn at the time of the portrait and share their pictures via the Internet.

The Cassini Earth portrait is part of a more extensive mosaic -- or multi-image picture -- of the Saturn system as it is backlit by the sun. The viewing geometry highlights the tiniest of ring particles and will allow scientists to see patterns within Saturn's dusty rings. Processing of the Earth images is expected to take a few days, and processing of the full Saturn system mosaic will likely take several weeks.

Inspired in part by the Cassini team's plans to obtain a picture of Earth, scientists reexamined the planned observations of NASA's MESSENGER spacecraft in orbit around Mercury. They realized Earth is coincidentally expected to appear in some images taken in a search for natural satellites around Mercury on July 19 and 20. Those images will be taken at 4:49 a.m., 5:38 a.m. and 6:41 a.m. PDT (7:49 a.m., 8:38 a.m. and 9:41 a.m. EDT, or 11:49, 12:38, and 13:41 UTC) on both days. Parts of Earth not illuminated in the Cassini images, including all of Europe, the Middle East and Central Asia, will appear illuminated in the MESSENGER images. MESSENGER's images also will take a few days to process prior to release.

Details on how to find Saturn in the sky and participate in the event are available at: http://saturn.jpl.nasa.gov/waveatsaturn .