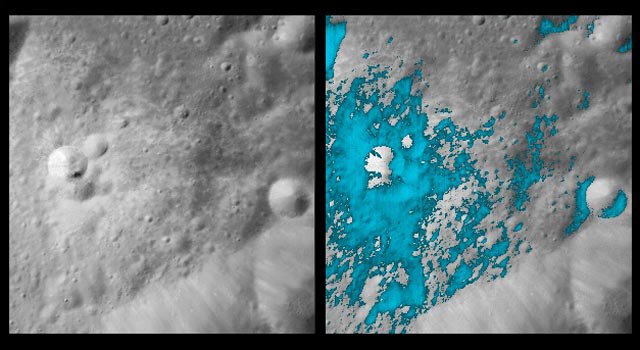 These images show a very young lunar crater on the side of the moon that faces away from Earth, as viewed by NASA's Moon Mineralogy Mapper on the Indian Space Research Organization's Chandrayaan-1 spacecraft. Full Image Details

PASADENA, Calif. -- NASA scientists have discovered water molecules in the polar regions of the moon. Instruments aboard three separate spacecraft revealed water molecules in amounts that are greater than predicted, but still relatively small. Hydroxyl, a molecule consisting of one oxygen atom and one hydrogen atom, also was found in the lunar soil. The findings were published in Thursday's edition of the journal Science.

NASA's Moon Mineralogy Mapper, or M3, instrument reported the observations. M3 was carried into space on Oct. 22, 2008, aboard the Indian Space Research Organization's Chandrayaan-1 spacecraft. Data from the Visual and Infrared Mapping Spectrometer, or VIMS, on NASA's Cassini spacecraft, and the High-Resolution Infrared Imaging Spectrometer on NASA's Epoxi spacecraft contributed to confirmation of the finding. The spacecraft imaging spectrometers made it possible to map lunar water more effectively than ever before.

The confirmation of elevated water molecules and hydroxyl at these concentrations in the moon's polar regions raises new questions about its origin and effect on the mineralogy of the moon. Answers to these questions will be studied and debated for years to come.

"Water ice on the moon has been something of a holy grail for lunar scientists for a very long time," said Jim Green, director of the Planetary Science Division at NASA Headquarters in Washington. "This surprising finding has come about through the ingenuity, perseverance and international cooperation between NASA and the India Space Research Organization."

From its perch in lunar orbit, M3's state-of-the-art spectrometer measured light reflecting off the moon's surface at infrared wavelengths, splitting the spectral colors of the lunar surface into small enough bits to reveal a new level of detail in surface composition. When the M3 science team analyzed data from the instrument, they found the wavelengths of light being absorbed were consistent with the absorption patterns for water molecules and hydroxyl.

"For silicate bodies, such features are typically attributed to water and hydroxyl-bearing materials," said Carle Pieters, M3's principal investigator from Brown University, Providence, R.I. "When we say 'water on the moon,' we are not talking about lakes, oceans or even puddles. Water on the moon means molecules of water and hydroxyl that interact with molecules of rock and dust specifically in the top millimeters of the moon's surface.

"The data from Cassini's VIMS instrument and M3 closely agree," said Roger Clark, a U.S. Geological Survey scientist in Denver and member of both the VIMS and M3 teams. "We see both water and hydroxyl. While the abundances are not precisely known, as much as 1,000 water molecule parts-per-million could be in the lunar soil. To put that into perspective, if you harvested one ton of the top layer of the moon's surface, you could get as much as 32 ounces of water."

For additional confirmation, scientists turned to the Epoxi mission while it was flying past the moon in June 2009 on its way to a November 2010 encounter with comet Hartley 2. The spacecraft not only confirmed the VIMS and M3 findings, but also expanded on them.

"With our extended spectral range and views over the north pole, we were able to explore the distribution of both water and hydroxyl as a function of temperature, latitude, composition, and time of day," said Jessica Sunshine of the University of Maryland. Sunshine is Epoxi's deputy principal investigator and a scientist on the M3 team. "Our analysis unequivocally confirms the presence of these molecules on the moon's surface and reveals that the entire surface appears to be hydrated during at least some portion of the lunar day."

For additional information and images from the instruments, visit: http://www.nasa.gov/topics/moonmars .

For more information about the Chandrayaan-1 mission, visit: http://isro.gov.in/chandrayaan/htmls/home.htm .

For more information about the EPOXI mission, visit: http://www.nasa.gov/epoxi .

For more information about the Cassini mission, visit: http://www.nasa.gov/cassini .