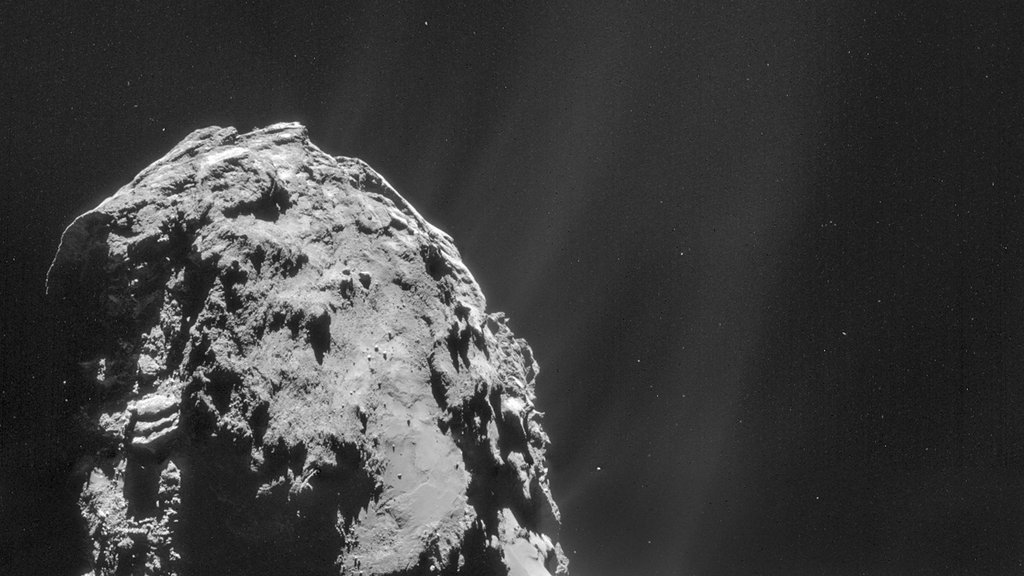 This composite is a mosaic comprising four individual NAVCAM images taken from 19 miles (31 kilometers) from the center of comet 67P/Churyumov-Gerasimenko on Nov. 20, 2014.› Full image and caption
Credit: ESA/Rosetta/NAVCAM

NASA's Alice instrument on Rosetta finds that electrons near its target comet cause rapid breakup of water and carbon dioxide molecules released from the comet's nucleus.

Data collected by NASA's Alice instrument aboard the European Space Agency's Rosetta spacecraft reveal that electrons close to the surface of comet 67P/Churyumov-Gerasimenko -- not photons from the sun, as had been believed -- cause the rapid breakup of water and carbon dioxide molecules spewing from the comet's surface.

"The discovery we're reporting is quite unexpected," said Alan Stern, principal investigator for the Alice instrument at the Southwest Research Institute (SwRI) in Boulder, Colorado. "It shows us the value of going to comets to observe them up close, since this discovery simply could not have been made from Earth or Earth orbit with any existing or planned observatory. And, it is fundamentally transforming our knowledge of comets."

A report of the findings has been accepted for publication by the journal Astronomy and Astrophysics.

Analysis of the relative intensities of observed atomic emissions allowed the Alice science team to determine the instrument was directly observing the "parent" molecules of water and carbon dioxide that were being broken up by electrons in the immediate vicinity, about six-tenths of a mile (one kilometer) from the comet's nucleus. The carbon dioxide and water are being released from the comet's nucleus and affected by electrons near the nucleus.

Since last August, Rosetta has orbited within 100 miles (160 kilometers) of comet 67P. The Alice spectrograph on board Rosetta specializes in sensing the far-ultraviolet wavelength band. Alice examines light the comet is emitting to understand the chemistry of the comet's atmosphere, or coma. A spectrograph is a tool astronomers use to split light into its various colors. Scientists can identify the chemical composition of gases by examining their light spectrum. Alice is the first such far-ultraviolet spectrograph to operate at a comet.

Alice data indicate much of the water and carbon dioxide in the comet's coma originate from plumes erupting from its surface.

"It is similar to those that the Hubble Space Telescope discovered on Jupiter's moon Europa, with the exception that the electrons at the comet are produced by solar radiation, while the electrons at Europa come from Jupiter's magnetosphere," said Paul Feldman, an Alice co-investigator from the Johns Hopkins University in Baltimore, Maryland.

By looking at the emission from hydrogen and oxygen atoms broken from the water molecules, Alice scientists can actually trace the location and structure of water plumes from the surface of the comet.

The far-ultraviolet region of the spectrum allows scientists to detect the most abundant elements in the universe: hydrogen, oxygen, carbon and nitrogen. However, such measurements must be made from outside Earth's atmosphere, either from orbiting observatories such as the Hubble Space Telescope, or from planetary missions such as Rosetta. From Earth orbit, the atomic constituents can only be seen after their parent molecules, such as water and carbon dioxide, have been broken up by sunlight, hundreds to thousands of miles, or kilometers, away from the nucleus of the comet.

The Alice spectrograph has also studied the surface of Comet 67P/Churyumov-Gerasimenko and will be used in further studies of its atmosphere as the comet approaches the sun and its plumes become more active due to solar heating.

The Alice instrument is one of two ultraviolet spectrometers named Alice currently flying in space. The other is on board NASA's New Horizons spacecraft, which is destined to make a flyby of Pluto in July. The Alice on board Rosetta is probing the origin, composition and workings of comet 67P/Churyumov-Gerasimenko, to gather sensitive, high-resolution insights that cannot be obtained by either ground-based or Earth-orbiting observation. It has more than 1,000 times the data-gathering capability of instruments flown a generation ago, yet it weighs less than nine pounds (four kilograms) and draws just four watts of power.

Other U.S. contributions aboard the Rosetta spacecraft are the Microwave Instrument for Rosetta Orbiter (MIRO); the Ion and Electron Sensor (IES), part of the Rosetta Plasma Consortium Suite; and the Double Focusing Mass Spectrometer (DFMS) electronics package for the Rosetta Orbiter Spectrometer for Ion Neutral Analysis (ROSINA). They are part of a suite of 11 total science instruments aboard Rosetta.